With 48 seconds remaining in regulation, DeVonta Smith skied to reel in a 22-yard heave from backup quarterback Gardner Minshew, drawing the Eagles’ offense within striking distance at the Dallas 19-yard line in what was poised to be the go-ahead touchdown drive.

In the midst of a six-point deficit – with a running clock – Smith scurried to line up.

An urgent Minshew spiked the ball as the clock approached 34 seconds, offering Smith a momentary pause to process his latest feat. But in typical Smith fashion, the stoic second-year wideout remained steadfast in pursuit of victory.

The 24-year-old had just eclipsed the 1,000-yard receiving barrier — joining his counterpart, A.J. Brown, who surpassed the mark two weeks prior – to claim the distinction of the first receiving tandem to reach the coveted 1,000-yard milestone in Eagles history. 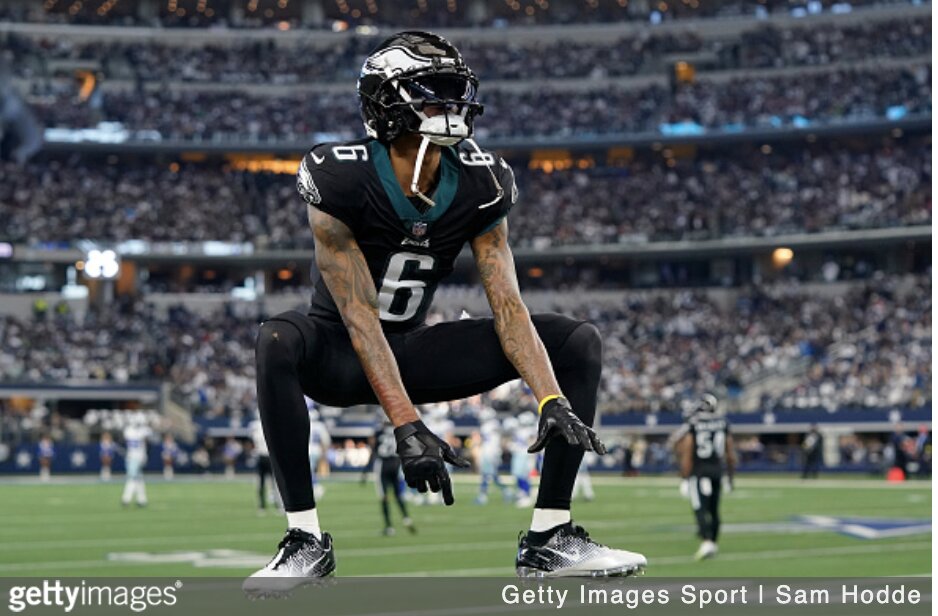 “Nothing surprises me with [DeVonta],” said coordinator Shane Steichen on Tuesday. “He’s an elite receiver, and those guys that work and grind every week to get themselves ready to play are going to do good things.

“That’s what he’s been doing, and he’s continuing to grow as a receiver. He’s seeing it well. The coverages, how to adjust his route in certain coverages and find the dead spots and the holes, and then he’s making elite catches.

“He had some big-time catches on the end cut, he had one on the sideline and just having an awareness where the sideline is and getting both feet down, he’s been very impressive.”

Smith, who now has 79 receptions for 1,014 yards and seven touchdowns through 15 games, had been the beneficiary of increased targets since tight end Dallas Goedert’s Week 10 shoulder injury.

In those five games, Smith caught 25 passes for 420 yards and two touchdowns.

Despite Goedert accounting for 94 percent of the snaps in his return on Christmas Eve, he didn’t cut as much into Smith’s production.

With Brown and Goedert representing the explosive, big-bodied pass catchers who each have a knack for collecting yards after the catch and leaving defenders in their wake, Smith dices up opposing secondaries with crafty route-running, elite body control, and an inherent fearlessness in traffic that belies his slender frame.

The “Slim Reaper”  is essential to the team’s intermediary passing game because of his ability to make tough catches over the middle.

All three Eagles pass-catchers pose unique conundrums to opposing secondaries and each have a special relationship with Jalen Hurts.

However, Smith has proven to be crucial to unlocking the full potential of the passing game during the season’s final stretch.

The No. 10 pick in the 2021 NFL Draft – who snared 64 receptions for 914 yards and five touchdowns as a rookie –  has checked off the few boxes that remained in his second season.

And should teams scheme to curtail Brown, who leads the Eagles in targets (126), receptions (80), yards (1,304), and touchdowns (10), the two-time Pro Bowler knows that the offense, which has reached historic franchise heights, won’t miss a beat.

“I think it’s good, especially for games down the road,” Brown said when asked of the benefits of playing with another viable option across from him. “Cause it’s gonna be tough. It’s gonna be tough. And it’s gonna take everybody. When I’m not playing my best at the time, DeVonta can pick up the slack. And vice versa.”