The Philadelphia Eagles are set to take on the rival Dallas Cowboys for the second time this season.

While the Birds handled their business against the ‘Boys in Week 6, this matchup Saturday on Christmas Eve could look much different with the Eagles set to be missing their starting QB and Dallas being shorthanded in the secondary.

On the latest episode of “Inside The Birds,” Adam Caplan and Geoff Mosher preview Saturday’s matchup and give their final score predictions. 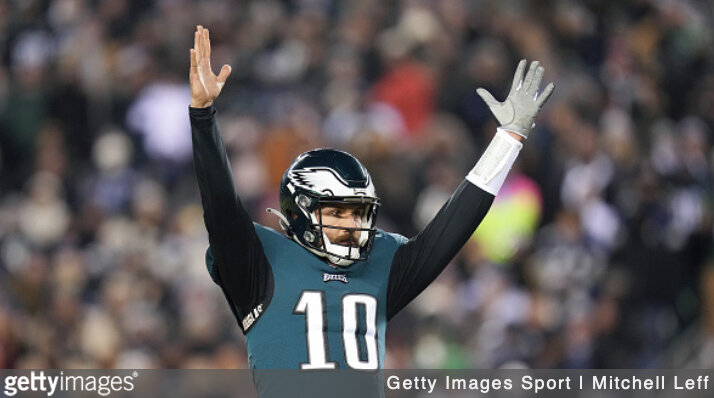 Adam Caplan: “They play a ton of nickel. They’ll mix it up, play some man, play some zone. Jayron Kearse is going to be on (Dallas) Goedert. They love putting him on tight ends. He’s 6-4, tallest safety in the NFL. Donovan Wilson, number six, is really good. The problem they are having is at corner, they are really getting housed. Trevor Lawrence killed them last week.”

Caplan: “The Eagles offense will change in one way, because Minshew is a scrambler, not a runner. But they are not going to hide Minshew. They will throw the football. This kid’s a really good backup quarterback and you saw it last year against the Jets…The other thing is Minshew does not have Hurts’ ability to throw the ball downfield. He is a short-to-intermediate area guy.”

Mosher: “I remember that game. It looked so good in real time. But I remember us doing the film review, talking to sources, going back ourselves and looking at it, there were a decent number of balls that Minshew threw that were either under-thrown or that you knew against a better team would not hit the intended target…If they’re going to come out throwing, which I still think they will do, I think DaRon Bland is the guy they are going to go after. [Kelvin] Joseph, too.”

Mosher: “Their game plan in the first game for Micah Parsons was impeccable. It was basically make him the conflict player, run RPOs and read options to his side, make him have to decide whether the QB’s going to keep it or throw it, sometimes they brought Goedert around as a blocker then turned him into a pass target in the same play. You saw Micah was in between. But there’s no threat of Gardner Minshew. He can scramble but he’s not going to be a designed runner that’s going to keep a defensive end or outside linebacker in a conflict position.”

Mosher: “I wonder if Dak’s injuries have impacted how he’s playing the game. The last couple of games I have watched of Dak, whether on TV or just tape, he does a good job of taking what the defense gives and knowing what the defense wants to do. But I don’t see him looking to drive the ball like he used to. Maybe it’s no faith in Michael Gallup, but maybe he just doesn’t like taking the hits.”

Caplan: “There’s a reason they tried to trade for Brandin Cooks. Their receiving corps is really not that good. It’s just above average. You don’t worry about any of these guys. As a group, they’re fairly productive, but there’s no special player. CeeDee Lamb is a good player, not special in any way.”

Mosher: “I think this is where the Eagles really have to be in gear, because Tony Pollard has become a really good running back in this league and they’re finally starting to use him a lot more. In Week 6, the Cowboys did have success once they went towards the running game.”

Caplan: “Pollard is explosive. He’s a guy I’d be worried about. They’ll split him in the slot, split him out wide. He has had some big plays this season… In the first game, Pollard was a non-factor in terms of catching the ball.”

Caplan: “I have it Cowboys 23, Eagles 27. This is a huge game for Minshew. Getting Goedert back, he had great chemistry with him. They’re going to give Miles (Sanders) the ball, but they’re not going to hide Minshew. This should be a very good game. The Eagles are the better football team and the thing that puts them over the top, to be able to win 10 games on the road.”

Mosher: “I think it’s going to be a very low scoring game. This is going to be a defensive slugfest, a lot of pressures, hurries, big hits, maybe some turnovers. At the end, I see the Dallas Cowboys having 16 points and I see the Eagles having 20.”