The Philadelphia Eagles’ Week 15 win did not come as easy as expected. Despite the Chicago Bears having inferior talent, they were able to scheme up different ways to slow down the dynamic Philadelphia offense.

On the latest episode of Inside the Birds, Adam Caplan and Geoff Mosher provided intel on the Jalen Hurts injury and reviewed the All-22 film from the victory over the Bears. 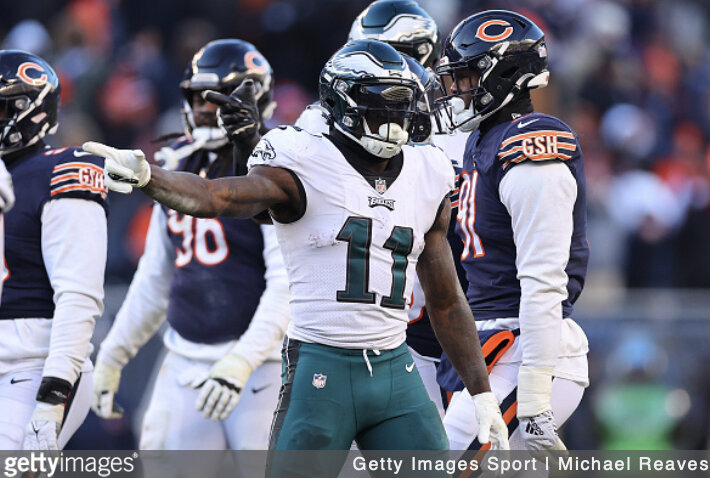 Though the Chicago Bears slowed down the Eagles run game, they were no match for A.J. Brown, who finished with a career high 168 yards

Geoff Mosher: “The reason why they’re not ruling him out is because from what we understand it’s a low-grade shoulder sprain. As far as we understand, they were still testing him as of Tuesday just to continue to get intel.”

Adam Caplan: “There’s one, two, and three [grades of shoulder sprains]. One is what he has. Typically, when you hear low grade, it’s grade one. As long as there’s nothing associated with the sprained right shoulder, no damage to the neck. Covering this injury since 2001, a lot of quarterbacks would play. You can shoot him up, numb the pain, and he could play. Here’s the problem: let’s say he only misses one game; you have to worry about him getting thrown to the ground. That’s always the issue with shoulder injuries. You have to be careful here.”

Mosher: “The Bears did a really good job conceptually, when the Eagles wanted to run their zone read plays, of dictating Jalen Hurts carrying the ball. They crashed the edge defender that is often the read player in zone read concepts every single time. They were basically coached to just go and that’ll make the QB keep the ball, run to the outside, and then they brought a linebacker around and a safety down to take the QB, and they hit Jalen Hurts a lot because of it.”

Mosher: “He’s so good of a slant catcher because he’s just as good – if not better – as a 9 route runner. When you’re a cornerback, you’d rather get beat on the inside than down the sideline for a touchdown. Because [Brown] does both within the games, just like he did against the Bears, corners generally tend to play a leverage that funnels him inside instead of getting beat all the way down the field, which he’s done a lot, too. Then you couple that with the fact that he’s so strong, he plays with great pad leverage, his stem goes right into a corner’s hip and he breaks so sharply.”

Caplan: “They didn’t have to blitz. The Bears offensive line is awful. They stunted the hell out of them. I didn’t count the stunts, but the Eagles have been doing a lot more lately. They are really good at it.”

Mosher: “We’ve been talking about the Eagles doing this more lately over the last few weeks and they really did it against the Bears. They almost did none of it the first six or seven weeks of the season, to the point where when they started doing more stunting and twisting a couple of weeks ago, it really stood out even though it wasn’t all of the time. Now it seems like they’re doing it with a lot more frequency. I think they did for it the same reason why the Bears were doing it to them: when you stunt those tackles out, you keep the quarterback funneled into the pocket and wanting to move up. And then the ends, who are the faster players, are the ones stunting in and getting a chance to get a hit on the QB.”

Caplan: “What they did, because they knew the Bears receivers couldn’t win, he played a lot inside and knifed in there. Even on the TV copy, you could tell he tackled well, didn’t make many mistakes. We understand he’s a backup. Let’s put it this way: (Reed) Blankenship is a better football player already before his injury. He’s basically a fourth or fifth safety. They over-drafted a box player. He’s not good in coverage.”

Mosher: “What a signing. He is their starting nose tackle, not because Jordan Davis is injured, but because he’s the better player right now. Something I observed is there were more than a handful of snaps where they played Joseph and Davis in the same line formation. That’s a lot of man in the middle.”

Caplan: “There was no way to know this would happen. He’s playing more snaps every week. He played over 50% of the snaps, which was stunning. What a great story.”