Coming off a decisive 26-point victory over the New York Giants – a triumph that included two Eagles eclipsing the 1,000-yard threshold, respectively – the Eagles will look to elude trap-game temptations against the lowly Bears as a date with the surging Dallas Cowboys looms next Saturday.

Two weeks removed from a 28-19 loss at the hands of their NFC North-rival Green Bay Packers, the Bears return from a Week 14 bye week in search of their fourth win of the season.

Here are four X-factors poised to make an impact: 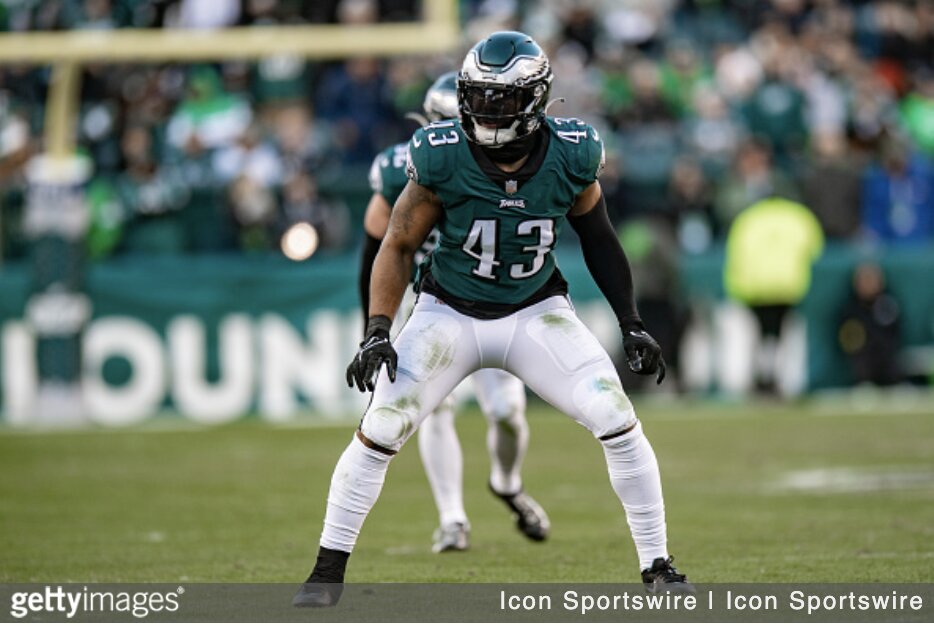 LB Kyzir White: Following an early season surge, White has somewhat flown under the radar of late. For perspective, the 26-year-old has yet to record a sack, has just one tackle for loss, and registered his first quarterback hit of the season last week at MetLife Stadium. Alas, in addition to his renowned coverage acumen, White has generally been reliable and fundamentally sound as a tackler, making him an ideal complement to the physical, tenacious T.J. Edwards. In an effort to thwart a potentially monstrous day on the ground from Fields – rendering obsolete an otherwise barren offense – I would anticipate defensive coordinator Jonathan Gannon scheming White’s unique athletic traits into a spy role, similar to White’s Week 5 duties, when he shadowed Cardinals quarterback Kyler Murray. White’s value will be demonstrated this week.

RB Miles Sanders: Through 13 games, the Bears have allowed 1,902 rushing yards to opposing offenses – 27th in the NFL – and they’ll now prepare for Sanders, who gashed the Giants last week on the ground to the tune of 144 yards and two touchdowns. The Eagles will presumably employ a run-heavy tactical approach to shorten the game given the frigid conditions – combined with Chicago’s glaring vulnerability against the run – leading up to the marquee matchup, on a short week, against the NFC East-rival Dallas Cowboys. Sanders should pick up his fourth 100-plus yard outing of the season in a game that could mirror the Week 12 battering of the Green Bay Packers, where the Eagles rolled up 363 rushing yards.

QB Justin Fields: Largely devoid of offensive firepower, Chicago will be solely reliant on Fields’ game-breaking ability as a runner. While the second-year quarterback has thrown for just 1,896 yards and 13 touchdowns through 12 games, his incredulous 905-yard rushing total qualifies as ninth-most in the NFL. Without injured wideout Darnell Mooney, and without polarizing trade deadline acquisition Chase Claypool (knee), the weaponry will be severely limited when the Bears take to the air, effectively placing the offense’s viability squarely on the legs of the Bears’ 23-year-old quarterback. Fields is averaging 75.4 yards per game as a runner compared to just 158 as a passer. Save for a lapse in containment or sudden resurgence of lackadaisical tackling efforts, the Eagles should be able to limit Fields’ yardage even though he’s quickly become one of the league’s preeminent equalizers.

LB Nicholas Morrow: Among the few bright spots on a hapless Bears defense, Morrow has played nearly every snap this season. A six-foot, 216-pound defender boasting 4.5 speed, Morrow leads coordinator Alan Williams’ defense in snaps (808), tackles (84), and tackles for loss (9). He’s generally provided a stabilizing presence to the second level after signing a 1-year deal at the dawn on free agency. Given his athleticism and integral leadership role – the 27-year-old was appointed play-calling duties in the offseason – look for Morrow to draw the daunting assignment of spying Jalen Hurts, who has accumulated 332 rushing yards over the past four weeks. Morrow’s sideline-to-sideline prowess, instinctiveness, and versatility make him the Bears’ most effective solution – by default – for minimizing a crucial dimension of the Eagles’ high-octane rushing attack. The sixth-year linebacker is also likely to see a plethora of passes in his vicinity with tight end Dallas Goedert expected to return to action for the first time since Week 10.