The 12-1 Philadelphia Eagles clinched a playoff spot thanks to a 48-22 beatdown of the division rival New York Giants.

It was a familiar style of victory for the Birds, led by another unstoppable offensive performance and rampant pressure on the opposing quarterback.

On the Week 14 edition of “Inside The Birds Postgame Live,” Adam Caplan and Geoff Mosher were joined by Eagles Hall of Fame offensive tackle Tra Thomas to break down Sunday’s victory. 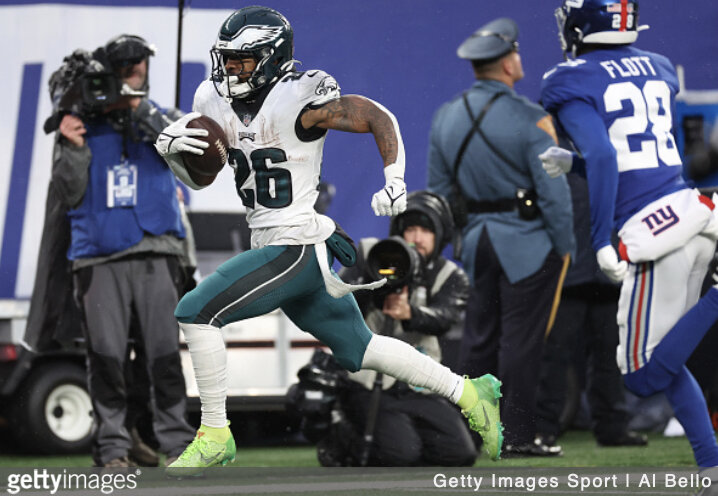 Tra Thomas: “They were really on point. You saw where Jason Kelce and them were making their calls. Everybody was on the same page, and Jalen (Hurts) did a really good job of getting rid of the ball. When you look at that first drive, 15 plays with 11 of them passing, excellent timing, excellent execution, knew where he wanted to go. This offense was steady and consistent right down the field for a touchdown and that’s what you’re looking for. You’re going to have breakdowns from time to time throughout the game, but overall, the offensive line did a really good job of knowing who they needed to take care of, and the running backs as well because they have to be in on some of those protections also.”

Geoff Mosher: “[The protection] didn’t have to hold long, because I thought the whole offense and Jalen Hurts were really prepared for the variety of blitzes. If you go to the first drive, it was a 3rd-and long, and Jalen Hurts hit Devonta Smith on a nice quick out, against a Cover-0 blitz. Everything was perfect, it was all in synchronization. The protection was there, the ball was out, and it was well placed.”

Adam Caplan: “The pass protection was just beautiful. It’s a perfect marriage between protection and when a QB is super accurate.”

Mosher: “As a rookie, you have to earn your stripes. He’s a guy who’s known as a pass catcher. He’s gotten a few snaps more since Dallas Goedert went down to catch some passes. Today, you saw him make the lead block for the Miles Sanders 40-yard touchdown. It looks like he’s learning that to get on the field, he’s going to have to get stronger and be a willing blocker.”

Thomas: “It doesn’t matter if you’re a ‘willing’ blocker or not. If you want to be on the field, that’s what you have to do as a tight end. I think he’s definitely accepting that role, being able to get out there and run block. You have to do the dirty parts of the game. You can’t always just sit out there and expect to catch some nice six or seven yard routes and get into the end zone, sometimes you have to go out there and move some people as well.”

Caplan: “He’s taking what’s there, he’s not trying to break a lot. The issue with him was he would try to break the big run, he’s able to get to the second level now by going where the block is. He’s just a complete back right now.”

Mosher: “There are some critics of Jonathan Gannon because he doesn’t blitz. But the Eagles now lead the NFL in sacks. They had seven sacks today, thirteen in the past two games, and 33 in the last seven. Yes, he doesn’t blitz that much but he doesn’t have to and, this isn’t discussed enough: he doesn’t run a static front at all. They twist, they stunt, he’s moving Haason Reddick around to create different mismatches. Obviously, what he’s doing is working from a pressure-generation standpoint.”

Thomas: “When you can sit back and say my front four or five can get home, that makes your job a whole lot easier as a defensive coordinator. Then you don’t have to worry about mixing in a blitz all the time. You might throw in a couple of run blitzes, but you have the best secondary in the game right now, so you can just go let your front four go out there and eat. They’re not leaving a lot left on that table because those guys are hungry and they’re getting after those sacks.”

Caplan: “I marvel at what he has been able to do. Did you know he had three sacks today?”

Thomas: “B.G. is just playing out of this world right now. B.G. and Kelce, two guys that you thought this might be their last year are just going out and balling. Even Fletcher Cox’s game is elevating. You’re starting to look at some of the older guys on the field that are really taking ownership and going out there when they could just mail it in. They’re going out there and playing their best football.”