From start to finish, the Philadelphia Eagles dominated all three phases in a 35-10 win over the Tennessee Titans.

On the Week 13 edition of “Inside The Birds Postgame Live,” Adam Caplan and Geoff Mosher were joined by Eagles Hall of Fame Offensive Tackle Tra Thomas to break down Sunday’s victory. 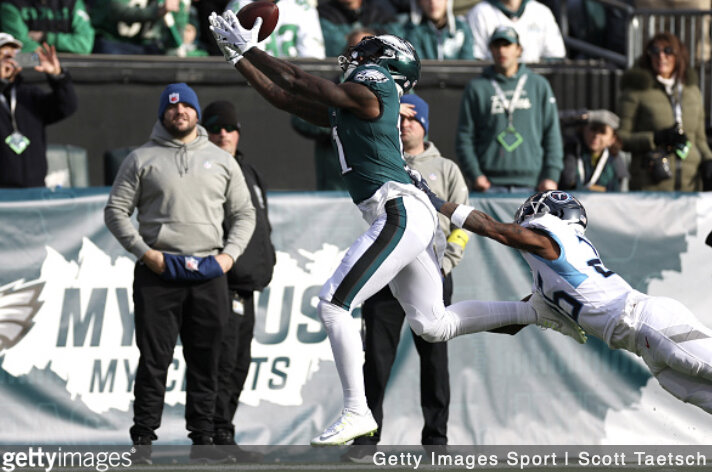 It was an excellent revenge game for WR A.J. Brown, catching 119 yards and two touchdowns against his former team the Tennessee Titans

Tra Thomas: “The protection was awesome. I think the offensive line did a really good job of protecting once they got out all of those penalties. There were times that Jalen Hurts had all day to do what he wanted to do. Everybody was talking about the rush that Tennessee was going to bring, but it seemed like this offensive line was not fazed by that at all. They did a really good job of playing with extension. A lot of times, when I watch them play, I’m looking to see if they play with their arms all the way out. I like for your tackles and guards to play with their arms out because it makes it a lot easier for your switch-off games, it makes it a lot easier for your control. You saw guys playing with a lot of extension there and they had their way with them.”

Geoff Mosher: “The Eagles had not thrown the ball 30 or more times since the Jacksonville game. That’s quite a while. Well today, [Jalen Hurts] had 39 throws, 29 completions, 380 [yards] and the ball placement from this guy has been great this year.”

Adam Caplan: “He’s a top-10 passer now as a deep-ball thrower. He continues to improve…when the protection matches the quarterback’s ability to throw the ball deep, the defense is in trouble and that’s what you saw today.”

Thomas: “You can tell that he trusts the protection. There were times last year where he didn’t trust the protection. You take a couple hits, you get a little skittish in the pocket. Now, you can see he sits in there and he knows his guys got him.”

Caplan: “The bottom line is they were dominant offensively in spite of some bad, bad penalties by their offensive line. They were still able to overcome that against one of the best defenses; they scored 35. This typically will not happen, but it shows the toughness of these guys to overcome it and still hold their water when they needed to.”

Mosher: “Absolutely everything they wanted when they traded for him. There is just a physical element of A.J. Brown’s game that I think is unique and special. We have not seen that, we have been used to the smaller shiftier guys for the last 15 years.”

Thomas: “I like the energy that he plays with. That can be contagious when you have a player like that who’s out there giving you everything he’s got, talking trash to everybody, and there’s nothing they can do it. That one touchdown, a lot of people said that was a beautiful catch, but the ball placement was right where it needed to be, right there on his shoulder.”

Caplan: “They moved the corners and the safeties up. They all were very disciplined against the run. This is what Jim Schwartz says when they play Wide-9: for that scheme to work, the back end has to tackle to well, and boy did they tackle well today. When you stop the Titans run game, you pretty much stop them.”

Thomas: “You have Derrick Henry, one of the most punishing running backs that we’ve seen in a while, and now they come out and handle their business and shut him down.”

Caplan: “(Haason) Reddick had four QB hits, (Josh) Sweat had three. (Fletcher) Cox’s energy was really good. We talked about this pregame that [Titans] left tackle Dennis Daley was in trouble. They absolute dominated the left side.”

Thomas: “Fletcher Cox, on the one sack that he had, he could have let the QB just go ahead and run out of bounds, but he turned on the jets a little bit, got him a sack. (Ndamukong) Suh turned it on that one time and beat the guard. You had so many guys being extremely active. Once they made the Tennessee team have to pass, they were out of the game.”

Mosher: “One play that really stood out and set the tone was Christian Elliss made a big play on kickoff coverage, him and Jack Stoll, and that was a guy they elevated [from the practice squad] for the first time to rectify some of their issues. Not only did they do a good job on kickoff coverage, but then Britain Covey gets a couple of nice returns, no issues with fake punts. It was about as perfect of a game as the Eagles could have this year on special teams.”

Thomas: “Your job’s on the line as a coach. No one wants to be the weak link on the chain. Michael Clay went in and made the necessary changes that needed to be made for this special teams…Overall, the group really accepted the challenge and tightened up their game. ”