Thanks to a resurgent run game and strong quarterback play, the Philadelphia Eagles offense came back to life in a 40-33 win over the Green Bay Packers.

On the Week 12 edition of Inside The Birds Postgame Live, Adam Caplan and Geoff Mosher were joined by Eagles Hall of Fame Offensive Tackle Tra Thomas to break down Sunday night’s victory. 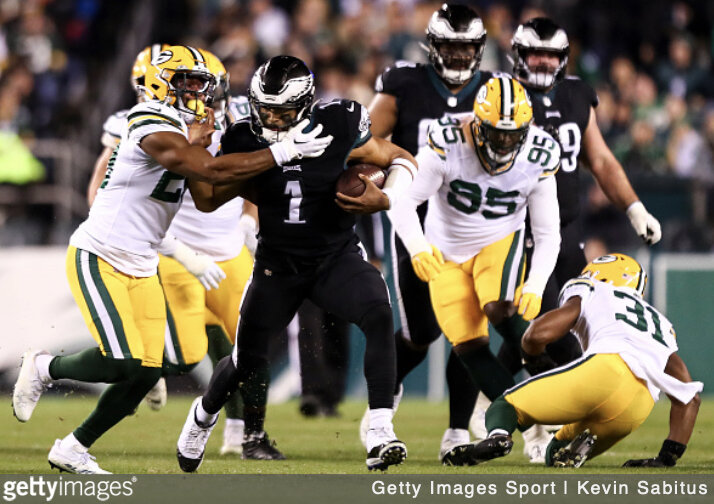 QB Jalen Hurts led the way for the Eagles run game that rushed for 363 yards in the 40-33 win.

Tra Thomas: “They did a good job of mixing it up, sending different guys. You lead in Lane (Johnson) up in there, you’re sending Jordan Mailata a couple of times. That has always been a good staple of the offense, mixing some of that in. One of the plays that really stood out to me was when they sent the running back in motion and now you have a five-man box, (Jason) Kelce just runs up on the linebacker and (Jalen) Hurts just follows behind him. I think they did a really good job of scheming up some runs and making sure they can gash this defense.”

Adam Caplan: “Hurts broke their backs as the game went along, it was something to see. You get concerned when quarterbacks are running so much, but he’s so strong physically. I’m interested to see what their approach is, because they’re playing a Titans team this Sunday – a super physical defense, one of the best fronts in the NFL.”

Thomas: “A lot of it was schemed and it just worked out. There were times where you just rushed four, Jalen Hurts says, ‘Alright I can see the gap, I shake that linebacker that you have there as a spy,’ and now we’re off and running because everybody else is trying to cover the receivers that we have running down the field, which played into our hands.”

Geoff Mosher: “We have talked about Jalen Hurts: is he and his running ability going to be the response to not having Dallas Goedert? Now it’s two games in a row he’s in double-digit rushing [attempts]. Seventeen rushes, 157 yards, 9.2 average. He had about five runs of 20 or more. It’s hard to hate on that, but at the same point, he took a couple of shots, too, so you’re walking a fine line here.”

Caplan: “Sanders’ hands have really improved. His conversion from targets to receptions is very good this season…Hurts doesn’t check the ball down like he was last season. But all of a sudden, they’re running the heck out of it.”

Mosher: “Linval Joseph was moved quite often when he was out there and the Eagles once again had real issues with stopping the run. We talked in the pregame show about Green Bay’s diversity in their run game compared to Indianapolis. You were getting hit with Aaron Jones and A.J. Dillon. There were isos, quick swings out to them, draws, sprints, inside and outside zone. That clearly gave this defense a lot of issues again.”

Caplan: “Milton Williams also got moved. Joseph actually got stood up, which is the cardinal sin for a defensive lineman. You didn’t see that last week against the Colts. Milton Williams, I don’t know why he was out there. They gave up about 5.1 yards per carry to the running backs, which is not good enough.”

Thomas: “That [interception] was an amazing play…That was his second play on the field and he jumps a route and gets an interception. That’s a confidence play right there.”

Caplan: “The reason why he made the team was the coaches were so impressed with his intelligence. They want a kid who’s smart, who can be coached and, if you had to play him in a pinch, he can handle. He’s not a great athlete, but he’s really smart. It’s only one game, so who knows the next time he has to play whether he can do the job. And who knows now with (C.J.) Gardner-Johnson’s injury, which really looked bad.”