Fixated on the big picture, the Eagles (8-1) travel to Indianapolis, Ind., ahead of a Sunday 1 p.m. tilt with the Indianapolis Colts (4-5-1) at Lucas Oil Stadium, eyeing a bounce-back performance in the wake of being handed their first loss of the season.

In spite of the scrutiny surrounding newly appointed interim head coach Jeff Saturday — who made his head coaching debut Sunday — the Colts managed their fourth win of the season against the Las Vegas Raiders, a 25-20 upset of the decisive home favorites that was largely catalyzed by a 147-yard rushing performance from Jonathan Taylor. 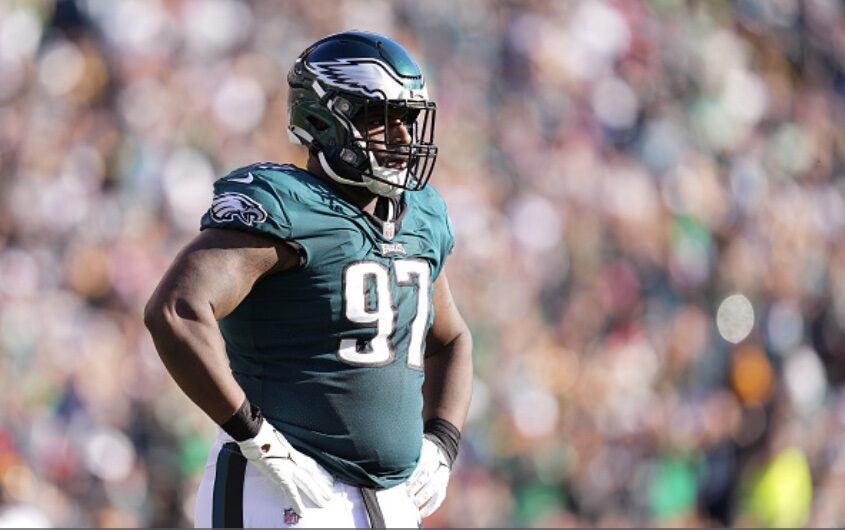 RB Miles Sanders: Last week, Sanders accounted for merely six rushing yards – on one carry – entering the break. The inexplicable discrepancy in his usage coincided in an uneven offensive performance in which the Eagles held the ball for only 19 minutes, 36 seconds. Sanders, tenth in the league in rushing yards (710), ultimately finished with 54 yards on 12 carries in the Eagles’ first loss of the season, but I wouldn’t bet on history repeating itself this week. Interestingly enough, despite holding the opposition to a meager 3.8 yards per carry – second only to the San Francisco 49ers – the Colts enter Week 11 bearing the odd distinction of being the sixth-most run-on team this season (292 carries). With that knowledge, I suspect the Eagles’ approach will be to feature Sanders on a short week, reestablishing its ball control offense and effectively nullifying a high-octane Colts rushing attack in an effort to preserve what could be an undermanned defensive front.

DT Javon Hargrave: In an attempt to bolster its run defense and provide relief to Hargrave and Fletcher Cox — the latter accounted for a season-high 70 snaps in last week’s defeat — the Eagles called upon presumed reinforcements, signing veterans Linval Joseph and Ndamukong Suh earlier this week. While it remains to be seen if either player will factor into Sunday’s equation in Indianapolis, it’s inarguable that Hargrave has been the team’s most effective front-7 defender in recent weeks, accumulating 6.0 sacks within the past three games. Though Hargrave’s pass rush acumen will be invaluable in moving 37-year-old Colts quarterback Matt Ryan off his spot and hastening his reads, Hargrave – who could well be the team’s most proficient run-defending lineman active on Sunday — comes under the microscope as the Eagles attempt to thwart a formidable Colts rushing attack, spearheaded by Jonathan Taylor, who enters Sunday’s matchup averaging 87 rushing yards per contest in the seven games in which he appeared. Jonathan Gannon’s defense, which surrendered 152 rushing yards on 49 carries days ago, must answer the bell if the Eagles expect to avoid a two-game skid.

WR Parris Campbell: Notorious for his electrifying downfield speed, Campbell’s explosiveness has been largely underutilized through ten games, with the fourth-year wideout averaging just 9.6 yards per reception. Still, the speedy, quick-twitched Campbell serves as an ideal complement to top receiver Michael Pittman Jr., and with the Eagles presumably selling out to contain running back Jonathan Taylor, Campbell could conceivably yield a handful on vertical opportunities that could change the game’s complexion. Ryan peppered Campbell with nine targets last week, in which the latter parlayed into to seven catches for a team-leading 76 yards. On the heels of Terry McLaurin’s dominance on Monday night, the Eagles can ill-afford to overlook a capable Colts receiving corps led by Campbell, Pittman, and emerging rookie Alec Pierce.

DT Grover Stewart: The Eagles’ stout interior wall uncharacteristically struggled to contend with Commanders d-tackles Jonathan Allen and Daron Payne – two of the league’s best – but if there is a proverbial kryptonite for this bunch, it typically manifests itself against larger-bodied interior maulers capable of pushing the pocket and disrupting offensive cohesion. Stewart, 6-4, 315, arms an active Colts defensive front with size, power, and athleticism at the nose and could well stymie the Eagles’ effectiveness in the running game and passing game execution. The burly defender collected four tackles (2.0) for loss, a sack, and a quarterback hit in Sunday’s win over the Raiders, and his 8.0 tackles for loss this season is tied for the team lead alongside linebacker Zaire Franklin. The Eagles will need to be sure to account for Stewart’s disruptiveness — and whereabouts — on Sunday afternoon.