Through eight games, the Philadelphia Eagles find themselves with one of the most talented rosters in the NFL.

However, with a potential quarterback contract extension on the way and with several key players set to be free agents after this season, the question becomes how long can personnel chief Howie Roseman keep this core together.

On the latest episode of the Inside The Birds podcast, Adam Caplan and Geoff Mosher took a deep dive into the team’s contract situations and discussed which players could return in 2023. 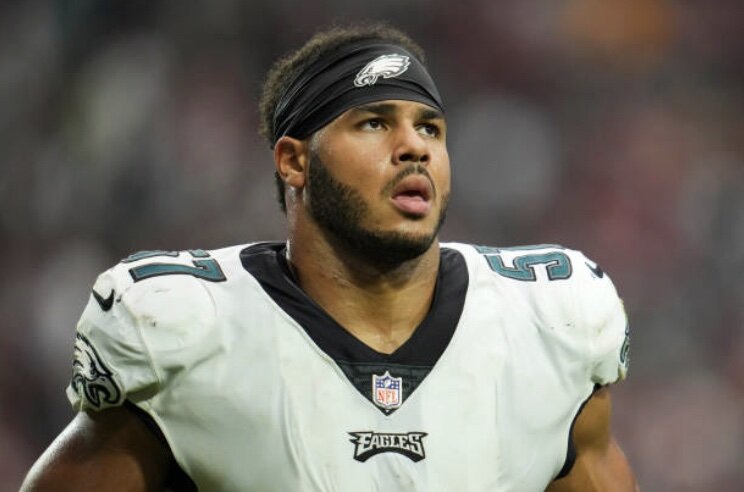 Getty Images: LB T.J. Edwards, from undrafted free agent to Eagles best linebacker, will be a free agent after 2022.

Adam Caplan: “You see the growth that he has made. The feeling here is for the Eagles: just let this thing play out…this is his first big year. They’re going to have to figure out what the comparable contracts are. I would look at the Dak Prescott extension. You have to find contracts that are fair because Hurts is having a fantastic year. I think what they’ll have to do is look at how he does in the playoffs. If he has a game like he had against Tampa in the playoffs [last season], the leverage goes to the club in terms of what they could offer him…Let’s say they get a bye and then they get to the championship game and lose, to me they’re extending his contract. I don’t see any way that they don’t, unless they don’t get the number one seed and have a bad playoff game.”

Geoff Mosher: “The Eagles do have leverage here because if he doesn’t want to accept their terms, he still has to play under contract unless he holds out, which has never really been a good things for guys under his position.”

Caplan: “There’s really no comparable contract for Sanders because all of the top guys are making $12 million a year. Sanders is a good player, [but] he’s not in (Alvin) Kamara or Derrick Henry territory. What Sanders’ agent could do: they could see what happens with (Saquon) Barkley’s contract or with David Montgomery. Or they could tag him if they don’t want to pay him long term.”

Mosher: “I start to think more and more that maybe the Eagles will figure out a way to bring him back. He’s not going to break the bank. You might be able to find that middle ground and you might be able to get most of that guaranteed money in the first two years of a three-year deal so it’s not that exorbitant. I don’t know if Miles will get more than three-year deal in free agency.”

Caplan: “I really don’t see both him and (Javon) Hargrave coming back, certainly one is in play. Fourteen million was an exorbitant number. He flashes still, but there are games where he’s just not good enough…You’re still seeing inconsistency. He’s still a good player, still a leader, but he’s nowhere near the player he once was. There’s really no comparable contract because of his age, it’s just a matter of would you really pay him $14 million next year? I can’t imagine they would.”

Mosher: “Here’s the thing: He’s got three sacks in eight games. He had that last year and they brought him back on a $14 million dollar deal. So, what would make you think they wouldn’t bring him back as long as he’s playing at the level he had last season?”

Caplan: “He can still clearly play, there’s no doubt about it. Just at 32 years old, which he turns next month, you have to ask yourself what you are willing to pay? Jordan Davis has to play a lot next year, he’s a starter, and you only have room for one more guy.”

Caplan: “This is the toughest part of the people who are doing the contracts, Roseman and his group. How do you let him go? He’s been an unbelievable story as an undrafted free agent. He couldn’t cover two years ago, but he’s so instinctive now.”

Mosher: “He’s their best linebacker, and that’s saying something now because Kyzir White has been pretty good. I know this will piss the fans off, but what I would do is bring both of these guys [Edwards and White] back and continue to keep Nakobe Dean as a reserve. I don’t want to walk away from either of these guys and I don’t think they are going to be all that expensive because it’s one of those fungible NFL positions.”

Caplan: “He is, right now, a Pro bowler. He is looking at a $10-12 million-a-year contract. You have to be really careful. You can’t go fully guaranteed when a guy is 30 at that position.”

Caplan: “I don’t see both of them coming back. There are so many free agents that they have. [C.J.] Gardner-Johnson is instinctive. He’s a big-play guy and is doing a great job in terms of what they’ve asked him to do. He’s still learning the defense, but he’s getting better each week.”