From the opening kickoff, Week 8 was never in doubt for the Philadelphia Eagles.

The team relied on the connection between Jalen Hurts and A.J. Brown for a crushing 35-13 victory over the Pittsburgh Steelers. 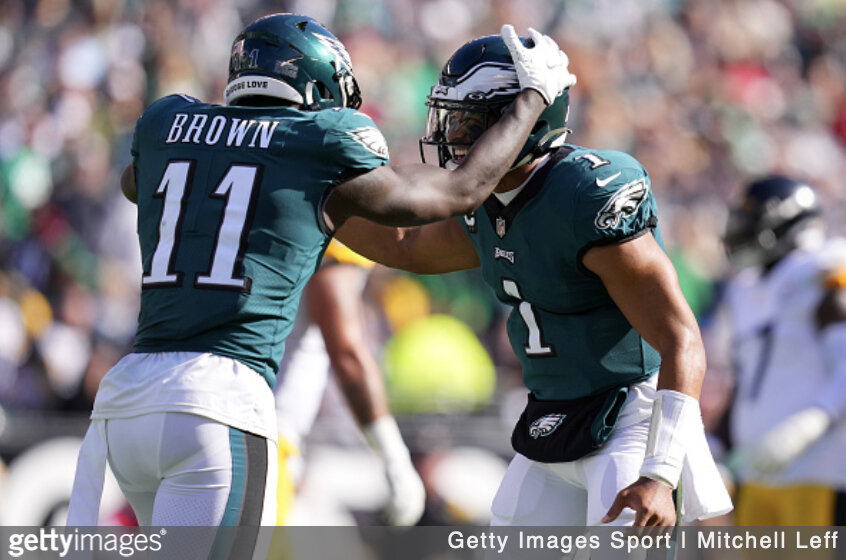 It was a career day for both QB Jalen Hurts and WR A.J. Brown as they linked up for three touchdowns, all in the first half of the 35-13 win over the Pittsburgh Steelers.

Adam Caplan: “This was one of the rare times that the tape matches up to the numbers. The tape tells you [Pittsburgh’s] cornerbacks aren’t very good and the numbers tell you they’re second or third worst in the NFL in giving up production, so why would you not go right after them? The first three or four throws, Hurts was off of his game a little bit, wasn’t very accurate. After that, he was throwing dimes. Protection was mostly good. They came out like we thought they would: They were throwing and they were very successful.”

Thomas: “A.J. Brown is definitely a special receiver out there, just the way he plays through contact and the way he catches with his hands. When Jalen was having a rough start at the beginning of the series when the game first started, it was A.J. Brown that made that catch right off the ground and got things started. That first touchdown was just an incredible throw because he threw it into double coverage and A.J. Brown comes down with it. That’s just trusting your player and knowing he’s going to make a play for you.”

Geoff Mosher: “A.J. just plays like such a veteran, a safety valve, who’s not just safe as in throwing in the middle and get a few yards, but you can kind of throw it anywhere and expect him to come down with it and that’s been such an advantage for this offense and I think that’s helped Jalen Hurts from a confidence standpoint.”

Thomas: “It’s a simple thing. When you look at Jordan (Mailata), sometimes he starts leaning on guys a little bit and that gives up the edge. You have to punch, just because it helps create space. It pushes the defender out a little bit more. Once you lean on him, your outside leg has to drop and that gives up the edge. I just saw him leaning a little too much, same thing with Lane (Johnson). He’s so used to getting back and allowing guys to climb into his chest and then he just sits on him. That’s cool if you have bull rushers, but if you have guys that are going to give you an edge rush, then it creates a problem because it makes Hurts have to step up. You end up giving away three sacks, two of them in the same series. That’s uncharacteristic of this offensive line.”

Thomas: “I thought that he was a great addition. He and (Josh) Sweat kind of have that same style of rush, just because they have the long arms, they come with the one hand stab, they both use that little hop out clean move.”

Mosher: “There have been times where the pass rush isn’t great, but the coverage still manages to be sticky. I thought the coverage won in the first half.”

Thomas: “I’m a firm believer in coverage is what gets you sacks. With this secondary here, that’s what’s going to win. You have Darius (Slay) and (James) Bradberry out there, these guys are the best in the game. I think our secondary helps us win and when we say we came out of here with six sacks, I look at our secondary.”

Caplan: “Edwards was all over today, two passes defended, they use him as a blitzer up the middle every now and then right up the middle. He had a very good game, no question about it.”

Thomas: “T.J. has been the linebacker that everybody has been waiting for. That’s what all players are supposed to do, you’re supposed to make it hard for the GMs to make that decision on who they’ll say goodbye to and who they’re going to extend.”

Thomas: “It’s more on the coaching. When it comes to kickoff and punt returns, some of those guys are on your defense, so it’s not a talent issue. I think it’s just more of getting guys in position and just wanting to get it done.”

Caplan: “You have a very average punter. (Arryn) Siposs is nothing special. The punt coverage is very shaky. They have two fakes they have gotten beat on which should never happen. And the return game is so disappointing.”

Mosher: “You wonder what they will do formationally. They don’t have anyone else of Jordan Davis’ size, and while they have a couple of players – for example Marlon Tuipuloto, who have played a little nose tackle in college – I don’t know if they can execute their 5-1 and 5-2 looks as well without the big guy. They may have to be a little different schematically.”