Through the bye week, the Philadelphia Eagles sit on top of a surprising NFC field, where expected contenders are struggling. The team’s biggest challenge might come from NFC East rivals.

On the latest episode of the Inside The Birds podcast, Adam Caplan and Geoff Mosher discussed the current state of the NFC East and underachieving teams in the conference. 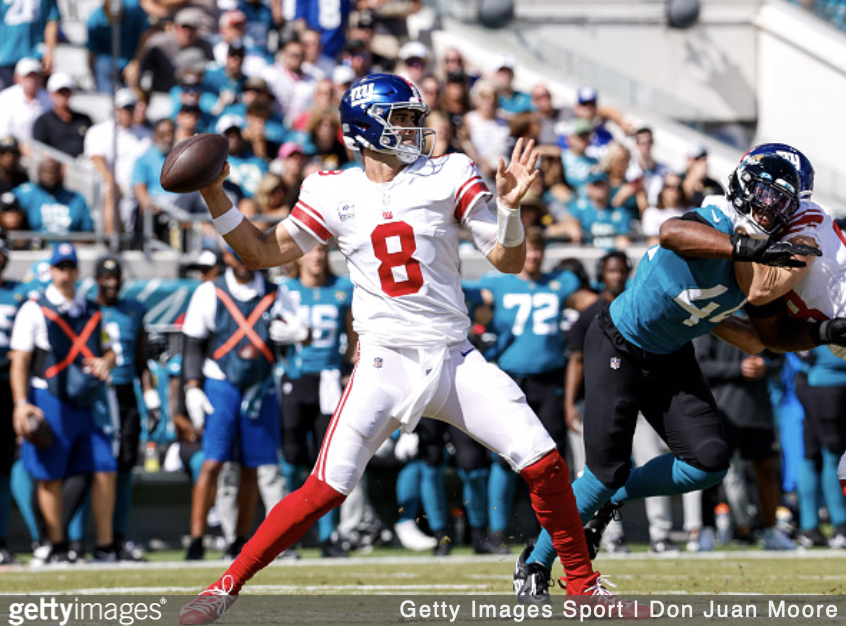 The 6-1 New York Giants might be the biggest surprise in the NFL this year.

Geoff Mosher: “They are 6-1 and they added to their defensive personnel. They added (Kayvon) Thibodeaux, they added a couple of players in the offseason, they added (Defensive Coordinator Wink) Martindale. This was a defense that had already given the Eagles problems last year. Is this the team that has the components [to beat the Eagles]? They can control the ball.”

Adam Caplan: ““What Wink does unbelievably well – better than probably any other defensive coordinator in the NFL – the first thing he wants to do is break down your protections. Nothing else matters to him. He only blitzes to break down your protections, because once he does, your QB is at the mercy of his front and you better be ready. They’ve had some injuries, but it doesn’t matter.”

Caplan: “Their run game has really improved. Zeke (Elliot) all of a sudden is showing he has a new lease on life. But I’ll tell you what: I was troubled with the way (Dak) Prescott threw the football. You have to watch the game, the stats do not show the way he played.”

Mosher: “I think the big thing with them is (Michael) Gallup isn’t Gallup yet. He hasn’t added the vertical element. We know CeeDee Lamb is a good receiver, but he’s not the guy you line up on the outside who you ask to win 20-30 yards downfield consistently. He’s a perfect slot and good at what he does. They really miss that over-the-top element or that freak of nature that they had with Amari Cooper, who let them down in many situations, but you needed to account for him when he was on the field. I don’t think Dallas has that kind of guy right now.”

Mosher: “What I think they figured out is just because just you want to get Brian Robinson involved in you running game and make him your feature back, doesn’t mean you have to completely take Antonio Gibson off of the field. He’s still a player who can do things for you offensively. I think they were struggling with that early on and seemed to have figured it out against Green Bay.”

Caplan: “They absolutely figured it out with Gibson. He had an incredible touchdown catch in the back of the end zone. Taylor Heinecke made a great throw…Jahan Dotson is terrific; he unfortunately had a hamstring injury. They’re close to getting him back. Their offensive line is still a problem. When the Eagles housed them, it’s because they have one of the worst offensive lines in football. Their defense is really getting better on Jack Del Rio. They’re looking to move William Jackson, one of their starting corners. Greg Cosell told us that he’s strictly a man corner and they’re playing a lot of zone this season to help their corners out because they don’t have a great pass rush. They’re figuring out ways to win.”

Caplan: “Here’s the problem: no Gronk. That is major. They’re getting nothing from their tight ends. Cameron Brate is hurt. Their o-line lost four guys from last season. Chris Godwin is not what he was before the ACL injury, Julio Jones hasn’t played since like Week 2, their defense has four or five guys hurt now. It was crazy to see (Tom) Brady threw the ball 49 times and didn’t throw a touchdown pass.”

Caplan: “The Packers have a ton of talent on defense, but they’re not playing up to their talent level under Joe Barry. And then you have the 49ers, Christian McCaffrey played a ton in the first half, but their defense just got housed.”