PHILADELPHIA – On the heels of the Philadelphia Phillies punching their ticket to the NLCS, hordes of impassioned fans congregated in the parking lots bordering Lincoln Financial Field hours before Sunday night’s marquee NFC East showdown between the Eagles and Cowboys, hoping to see the Eagles preserve their perfect record and cap a historic weekend in Philadelphia sports.

They were rewarded, as the Eagles opened a big lead and then held on after a late Dallas surge to win, 26-17, and head into the bye week with a perfect 6-0 record. Dallas fell to 4-2 and two games behind the NFC East-leading Eagles.

The Eagles, who snapped a three-game losing streak to Dallas, brought the lively crowd to its feet early, parlaying a Dallas penalty on fourth-and-4 into a Miles Sanders 5-yard touchdown run to cap a time-consuming drive that occupied seven minutes, 36 seconds.

Cowboys quarterback Cooper Rush, starting his fifth straight game for Dak Prescott, was erratic throughout the first half, completing just 5-of-16 attempts for 36 yards and two interceptions and compiling a paltry 1.0 quarterback rating – literally, 1.0.

The Eagles’ offense continued its troubling second-half trend, stalling for much of the third while Rush marched the Cowboys to scoring drives of 79 and 93 yards, respectively, before the Eagles ultimately regained momentum and held on. C.J. Gardner-Johnson secured the second of his two interceptions with less than three minutes to play, making a Dallas comeback all but impossible. 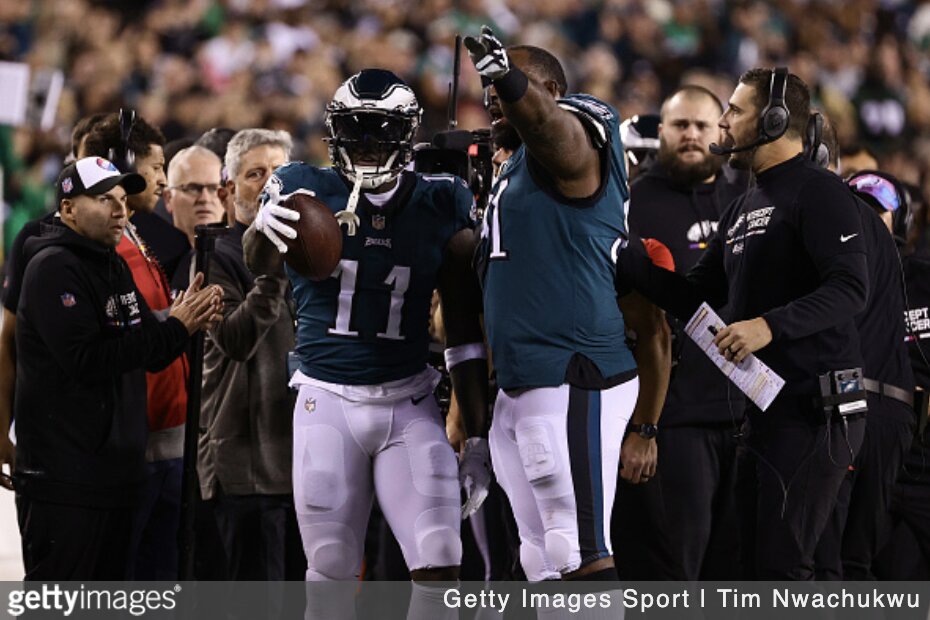 1) Strong start from the Eagles’ defense, which held Dallas to just 26 yards and one first down on eight plays through two series.

2) Eagles received a gift on their second drive via Dante Fowler neutral zone infraction on a fourth-and-4 on the Dallas 10-yard line and proceed to parlay the mishap into a Sanders touchdown plunge. The drive covered 15 plays, 75 yards (one penalty) and six first downs. Very efficient second drive from the Eagles offense, which continues to execute at a surgical level in the first half.

3) The Eagles’ pass defense had an active first half against what appeared to be a flustered and scattershot quarterback in Rush. On the Cowboys’ opening drive, Kyzir White got a hand in to negate a short pass over the middle while Marcus Epps, Gardner-Johnson, and James Bradberry also accrued pass breakups. Gardner-Johnson corralled a second-quarter interception off a Bradberry deflection, and the Eagles offense parlayed the turnover into a seven-play, 44-yard touchdown drive that culminated in a 15-yard touchdown pass from Jalen Hurts to wide receiver A.J. Brown. Darius Slay added another interception for good measure, and Gardner-Johnson secured his second of the night in the fourth quarter.

4) The Eagles’ secondary is a cohesive and communicative unit that continues to improve each week. In a game in which the pass rush failed to generate much of a push up front, the back end took control in the first half, defending passes and coming away with a pair of interceptions. As sporadic as their pass rush has been, the Eagles have enough length, athleticism and football intellect on the back end to take matters into their own hands.

6) Special teams continue to be the Eagles’ Achilles’ heel. Late in the first half, the kick coverage surrendered a 63-yard return to KaVontae Turpin. Punter Arryn Siposs, who has struggled with inefficiency for much of the season, posted a relatively pedestrian 46.8 yards per punt. While it is an incremental improvement, field position becomes paramount late in the season amid the elements.

7) Once again, the Eagles dominated the time of possession, consuming 19:35 of clock in the first half and 34:30 in total.

8) The Eagles did a masterful job keeping Cowboys’ pass rush standout Micah Parsons at bay. Parsons failed to generate a pressure on any of his first-half rushes, according to Next Gen Stats. Parsons also found himself in conflict on option plays, most notably on A.J. Brown’s 15-yard touchdown in the first half. The Cowboys’ sack artist failed to register a sack or quarterback hit. He also drew an untimely unsportsmanlike conduct penalty in the third quarter.

9) The game took a turn in the second half when the Eagles announced that stalwart right tackle Lane Johnson would be sidelined for the duration with a concussion. To his credit, replacement Jack Driscoll has answered the bell when called upon, be it guard or tackle, but he was decisively overmatched against a ferocious Dallas front. The Eagles’ four-play, 15-yard drive in the third quarter was a microcosm of Driscoll’s challenges. Nonetheless, the Eagles managed to navigate the adversity going into the bye.

10) As I’ve written, the second-half scoring woes hadn’t come back to haunt the Eagles – until tonight. While losing your All-Pro right tackle is suboptimal, the Eagles’ offense once again failed to establish a rhythm and remedy the opposition’s halftime adjustments.