The Philadelphia Eagles are set for their biggest challenge so far this season Sunday night.

The division rival Dallas Cowboys arrive in South Philadelphia with a 4-1 record led by their backup QB and one of the best defenses in the NFL.

On the latest edition of the Inside The Birds podcast, Adam Caplan and Geoff Mosher previewed the upcoming matchup and provided updates on the team’s biggest injuries. 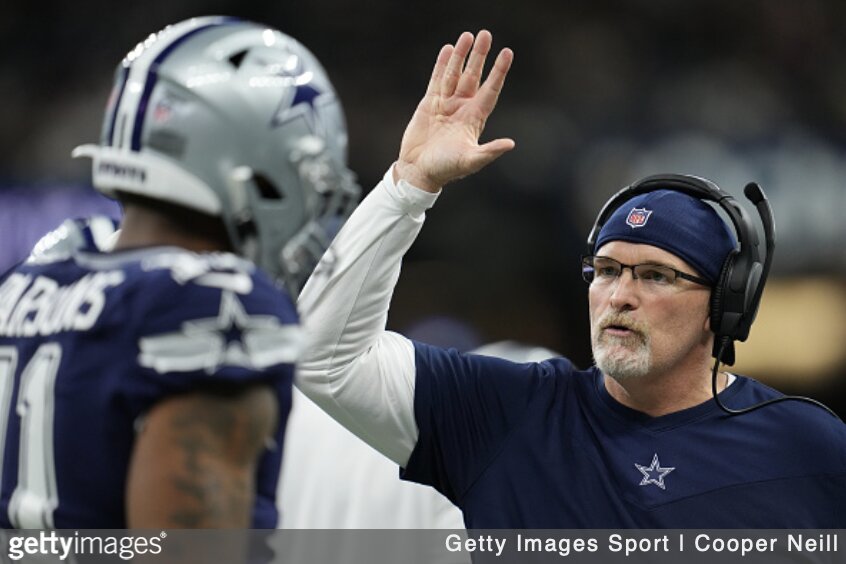 Dan Quinn’s defensive unit features some of the best pass rushers in the league.

Geoff Mosher: “He wants to play. His shoulder is still not right. He’s getting his normal treatment on it. He’s trying to give it a go. You’ve probably seen reporters tweet [pics of] him at practice. It’s my understanding that when he’s at practice, that’s him testing it out to see if it’s getting better as the days progress. I would not interpret him being at practice as any kind of sign that he’s much closer. If he does play, from what we understand, they’re talking about him wearing a harness or maybe a protective covering. Pain tolerance is part of the issue. The second part of the issue is what you’re able to from a range-of-motion standpoint and a punch standpoint. If you can have effective range of motion and punch and deal with the pain, then good, you’ll see guys play through that. But if the punch isn’t there, this is what you have Andre Dillard for. My sense is that although he wants to play, it’s going to be very difficult for him to get out there and do it. The last thing he and the coaching staff want to do is for him to make it worse, because even though the MRI came back clean, he’s still feeling discomfort, so you worry there’s something there that you’re not seeing, or that it can be aggravated again. I’m not very optimistic that he’s going to be able to go.”

Adam Caplan: “I call him very questionable. Very questionable is less than 50-50. You don’t go in thinking he can only play half the game. He either plays a full game or he doesn’t play at all. We both heard the MRI is clean. That doesn’t mean that there’s not something wrong there.”

Caplan: “He’s got a pretty decent ankle sprain, we’re told. He’s starting to work his way back. He’s going to have to make significant progress to be able to play.”

Mosher: “The guy is 5-0 going back to last year. He hasn’t thrown more than two touchdowns in a game, he hasn’t thrown for more than 235 yards, so you can fairly apply the game manager role, but he also is the only QB in the NFL with over 110 attempts who has not thrown an interception.”

Caplan: “They don’t ask him to do a lot, but he manages really well. He doesn’t make mistakes…If you’re the Eagles, because you’re at home, the fans are going to be out of their mind. This to me will be the test for Cooper Rush. If they get behind, the crowd will be a frenzy. If the Eagles get up 10-0, it’s going to be a long day for them. There’s no question to me you want to make Cooper Rush a passer and shut down their run game.”

Mosher: “More than one personnel person has told me that while Ceedee Lamb is a really good wide receiver, he does not consistently beat man coverage on the outside. He’s sort of a long strider, not necessarily a separate-at-the-top-of-the-route wide receiver. He’s much better finding his way in zone and sitting down.”

Caplan: “Tyler Smith is certainly better than people thought he would be. He’s been above average. What you have to do with him is you have to throw a lot of different line games. He has to communicate, because he’s a first-year starter. Remember, he played at Tulsa. He hasn’t seen anything like this. You have to make him think out there and confuse him. Line games, stunts, twists.”

Mosher: “Certainly, Micah Parsons and Demarcus Lawrence deserve a lot of attention. But I noticed about a year or two ago, this kid Dorance Armstrong coming on. Watch for him. If you follow Tru Media, their most recent chart was pass rush win rate vs double team rate. He of all [NFL] edge rushers had the highest win rate among double team rate in the NFL.”

Caplan: “Micah Parsons would not be as good as he is if not for Dan Quinn. He made a decision that he wouldn’t be a middle linebacker, strong-side linebacker, or d-end, he’d be everything. Coaching is understanding what you’re given and seeing traits and not worrying about what he did in college.”

Mosher: “The Cowboys don’t blitz a lot, but I think if you are Dan Quinn and you saw the Eagles response to blitzing last week, which was to just basically throw a screen every time, then you might want to dial up the pressure. And then we talked about Kenneth Gainwell’s issues. The Eagles just aren’t good with running backs at pass protection. If it’s a third down and you see Gainwell out there, it will be interesting to see if Dan Quinn dials up some extra man pressures to make Gainwell have to stay in and block someone.”

Caplan: “I’ve got it 23-20 Eagles. I’m going to pick the home team because they have the better QB.”

Mosher: “I have the Eagles scoring 19 points – and Dallas scoring 12.”