Despite obstacles and injuries, the Philadelphia Eagles prevailed in last Sunday’s matchup with strong play in the trenches.

On the latest episode of the Inside The Birds podcast, Adam Caplan and Geoff Mosher provided intel on the team’s injury situation and share notes from the All-22 tape of the Eagles’ 29-21 win at the Linc over the Jaguars. 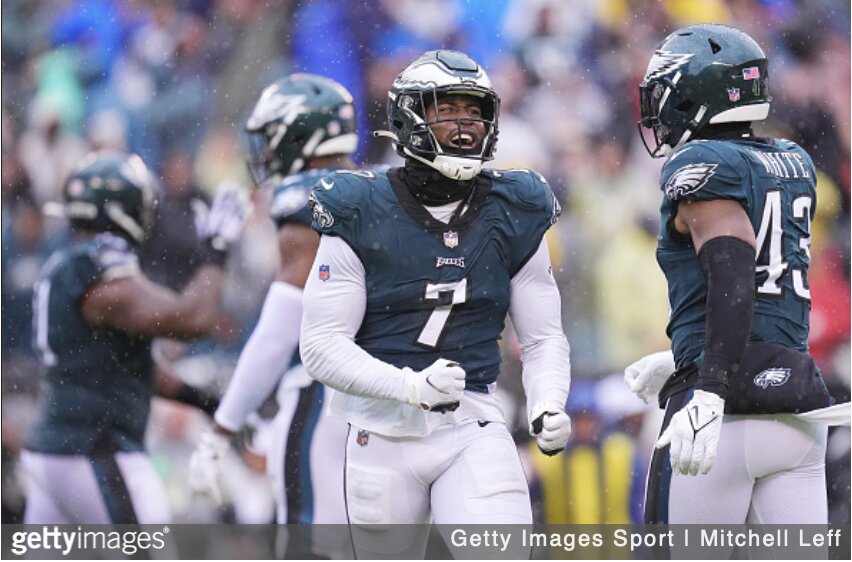 Haason Reddick’s performance was more than just the two sacks and forced fumbles on the stat sheet.

Adam Caplan: “I’m surprised another team didn’t sign him, but from what I understand, there was definitely another team involved so the Eagles had to act quickly and put him on [the practice squad]. My sense is he will be the kicker this week, but it’s not 100 percent. We’ll see if Elliot’s going to be better. They have until Saturday 4 p.m. Eastern to make the decision.”

Caplan: “It would be a surprise if he played this week based on the intel that we have from a source. The problem with an ankle injury if you’re a corner is you have to stop, start, and put your foot in the ground.”

Caplan: “His MRI was clean, so we’ll see. He’s a tough guy. Their depth is really getting tested.”

Caplan: “He’s got to do a better job of stepping up [in the pocket]. I don’t know if he was worried about the footing, but I was told pretty reliably that there were three or four times he could probably could have stepped up, some he couldn’t when the pocket closed too quickly.”

Geoff Mosher: “I did detect about two or three times where he could have just climbed up a little bit and make a step or two, because he’s already kind of running up in the pocket. If he just slows down and sees the guy, usually it’s a slot receiver or running back leaking out. On his 3-yard touchdown run, he had Kenny Gainwell wide open in the flat. He scored the touchdown, but he also took two really big hits right at the goal line, so you would love your QB just take the easy touchdown and not get popped.”

Mosher: “Even as good as it is, I’m still left in awe at what they can do. We don’t talk enough about how good Lane Johnson is. I think we take it for granted, but he really is unbelievable at what he does. I really thought that Landon Dickerson, for a guy that struggled with a foot injury, he was a monster. He was out there looking to put people on the ground. Those blocks where he and Mailata or (Jack) Driscoll worked a combo block on a defensive end, they’re just clearing guys out. The term is resetting the line of scrimmage, meaning that the offensive line is getting so much push that it looks like the line of scrimmage is further than where it was, and I don’t know if any team does it better than the Philadelphia Eagles.”

Caplan: “There was a play, (Jason) Kelce was looking for work. They blocked it so for well he was just looking for someone to get. I think it was on (Miles) Sanders’ touchdown run in the first half. Lane is the best offensive lineman in football now, based on the people that I have spoken with.”

Mosher: “His big rushes were speed-to-power rushes. There were a couple of times where he put both hands in the chest of Jawaan Taylor and got a pressure, which he’s not exactly known for, he’s known more for his speed rush. Now, I was talking about this with a personnel source who watched the tape, some of that is because Jawaan Taylor is not very good. But still, when you see a guy be able to execute a style of play that he’s not really associated with, that’s a good thing too. It shows growth, it shows the ability to try to do things and be more well-rounded and it worked.”

Caplan: “He was really good. He was a force player against the run, funneled stuff inside very well, is getting more comfortable in his [zone] drops.”

Mosher: “There were times where I think he didn’t understand the assignment, or he knew it in his head, but once you start getting out there and trying to apply it, it becomes tougher. They’re doing a lot of those matchup zone concepts. That requires communication, it requires comfort with who you’re playing with, and this was his first time out there. Even that pass that Trevor Lawrence had to Jamal Agnew wide open on the left side, he’s literally covering the same guy that Chauncey Gardner-Johnson was covering. I think he was supposed to carry Agnew to the deep corner or safety and it didn’t happen.”