PHILADELPHIA – For the Eagles to overcome the tumultuous conditions at Lincoln Financial Field on Sunday and defeat an upstart Jacksonville Jaguars team coming off a decisive road win, all three phases of their game needed to work in concert.

But while their high-octane offense rolled up 401 yards – including 156 from running back Miles Sanders — and while Jake Elliott converted a 28-yard field goal early in the fourth quarter, it was an opportunistic defense that fueled the 29-21 victory. 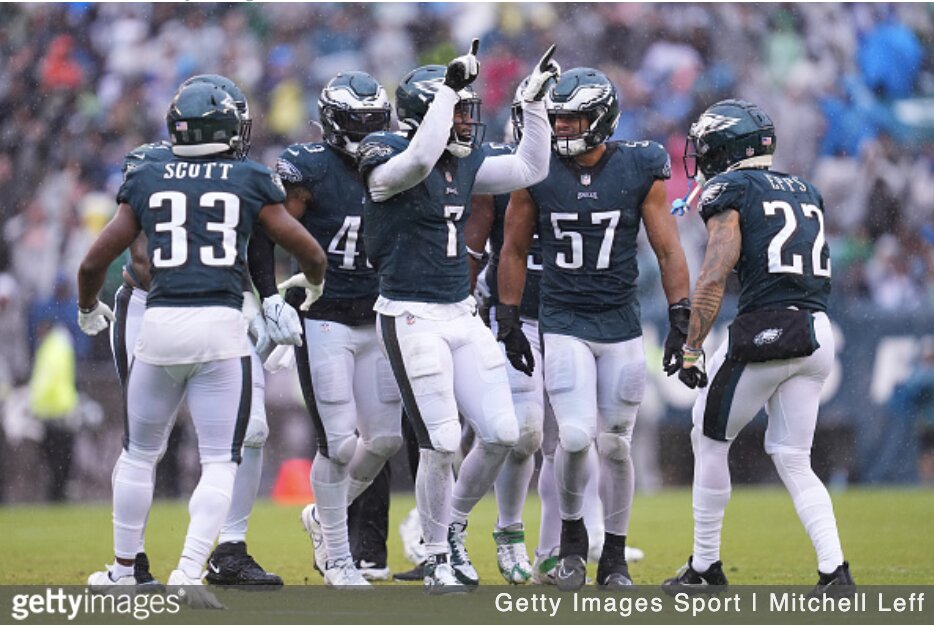 Defensive coordinator Jonathan Gannon presided over a turnover-frenzy onslaught that included four fumble recoveries and an interception as Jacksonville seemingly struggled to contend with the elements.

“We are [coming together], and we’ve still got some ways to go,” said linebacker Haason Reddick, who notched a pair of sacks. “We know that. Right now, our thing is just getting better each week, and so far we have been doing that.

“We’ve got to continue to harp on the details and continue to hold everybody accountable, so that way we can rally back in games like this. We were on the sidelines saying, ‘There’s a lot of ball left.’ We knew the game was far from over, and we just decided to go out there, work and do our best to dominate the men that were in front of us.”

Any formidable pass rush complements an effective back end when the defense is firing at full capacity, obstructing the line of sight for opposing quarterbacks and generating enough pressure to consistently hasten the reads, which set up James Bradberry’s third-quarter interception.

The game-turning play occurred with 4:24 left in the third quarter, with the Eagles nursing a six-point lead. The Jaguars had driven deep into Philadelphia territory when the possession abruptly stalled after an underthrown pass  failed to reach its intended receiver, Christian Kirk.

That’s because Bradberry read the eyes of quarterback Trevor Lawrence, breaking on the ball and corralling it for an interception and setting up the offense at its own 12-yard line.

“So, it was a 3-by-1 set,” Bradberry explained. “And then, I was running with No. 1 in man. [Number] One ran a post route, and I got my eyes back to the quarterback, and I seen [number] two running a wheel route, so I kind of just fell off. And that’s when I saw the quarterback throw it, and I broke and just made a play.”

Bradberry, who now has two interceptions and a touchdown, has proven to be a key addition to the Eagles’ blossoming secondary, and serves as the perfect complement to opposite corner Darius Slay.

“Once we get to the field, our talent, and of course, our preparation throughout the week kind of takes over,” Bradberry said regarding what makes them such an effective tandem. “But really, I enjoy being a teammate of Slay, like in the locker room and around the facility. He’s a fun guy. He’s a real laid back, modest guy, and he’s always in a good mood.”

On the subject of newcomers, one would be remiss to overlook the impact of rookie defensive tackle Jordan Davis, who collected four combined tackles and a tackle for loss against Jacksonville.

The mammoth interior space-eater maximized his snaps, pushing the pocket while proving to be especially disruptive against the run.

“Just tendencies,” Davis said on what enabled him to thrive against Jacksonville’s offensive line. “Jaguars, they show a lot of tendencies. Sometimes, they throw an RPO in to keep you honest, but when you see a tendency, I kind of bite on it and then just go vertical.

“My thing, right now, is just go vertical, step behind the line, if I get a double-team, hold firm and run to the ball. Just the fundamental stuff. And whatever happens, happens, you know? Make a couple plays here and there. Just do everything I can to benefit the team.”

The Eagles have shown they can win in various ways, but their fourth win in four games was largely the byproduct of their offseason acquisitions, a sign of a coordinated unit.

Whether it is sacks or turnovers, the Eagles are building something unique on defense. They haven’t produced many turnovers over the past few seasons.

“We had a lot of sacks last week [against the Commanders],” Cox said. “A lot of turnovers this week. We just have to continue to build. Obviously with a rainy game, there’s a lot that goes into that mentally where you are at. I think everybody came out ready to run.”