With two minutes, 21 seconds left in regulation Sunday, the Eagles faced a critical 3rd-and-2 from their own 27-yard line.

Ford Field was as raucous as it had been all afternoon, as a Detroit Lions stop would afford the home team ample time to climb back from a three-point deficit.

In his initial reaction to receiving the handoff from quarterback Jalen Hurts, Miles Sanders encountered Lions linebacker Derrick Barnes at the line before bouncing to his left and following Jordan Mailata’s block, which had sealed off defensive end Charles Harris. 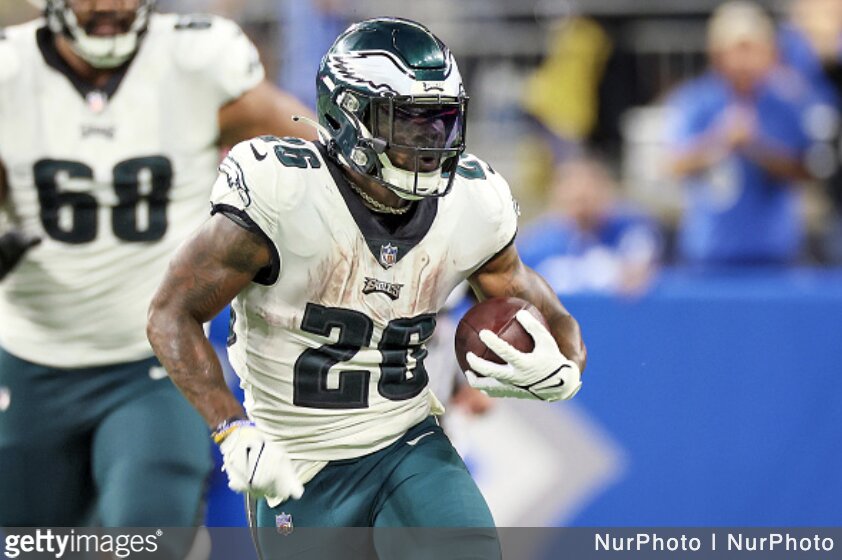 Miles Sanders totaled over 100 yards vs. the Lions and scored his first TD since the 2020 season.

As he accelerated through the crease, Sanders galloped 24 yards before ultimately being tripped up by cornerback Jeff Okudah, effectively ending any hopes the Lions harbored of getting the ball back.

“It was a regular inside zone play,” Sanders explained after the game. “It got stuffed up in the middle, Mailata had a great block on the edge, and I just stepped to the side and there was a wide-open hole. And just took it the distance.”

The 24-yard run was an amalgamation of Sanders’ patience, power, and burst – which he showcased all afternoon in Detroit.

Against an aggressive, fast-flowing Detroit front, Sanders debunked those preconceived notions about his ability to play through contact and pick up tough yards up the middle, albeit temporarily.

“When it’s 3rd-and-1, 4th-and-1, your mentality is to get downhill,” Sanders said. “They were very aggressive, though. All I had to do was kinda stay patient. I kinda figured they were gonna crash in the middle. Every time we ran the ball it was pretty efficient. Just be patient and read it out. Thanks to Mailata, he had a great block.”

Merely a month ago, such a start by the Eagles’ lead ball carrier would not have seemed possible.

Staring down the barrel of a contract year, Sanders endured scrutiny after stating at the start of training camp that his motivation going into his fourth season was “to get the respect that I finally deserve.”

After playing in just 12 games in each of the past two seasons – failing to reach the end zone in 2021 – the 25-year-old has averaged 813 yards through his first three seasons in the NFL.

In spite of this, the Pittsburgh native remained steadfast in his pursuit of proving himself to the rest of the league, arriving to training camp noticeably stronger, capable of handling the rigors of a full workload.

But after playing just eight snaps against the New York Jets in the preseason opener, Sanders resurfaced on the injury report with what was deemed leg soreness, which subsequently developed into a hamstring ailment. He was shelved for the remainder of training camp.

Defying any implication of foreshadowing, Sanders returned to the practice field at the dawn of September with the season-opener looming, exhibiting that same level of resolve and conviction he demonstrated at the podium in late July.

It is to Sanders’ credit that despite entering the season with a proverbial target on his back, he has answered the bell in Week 1, showcasing his signature burst with a seemingly newfound power element, adding another dimension to the offense.

He even managed to finally find the end zone, scoring on a 1-yard second-quarter plunge, his first since 2020.