The Philadelphia Eagles will take on the Detroit Lions at Ford Field in Week 1 with a relatively healthy roster and significant matchup advantages.

However, the Lions aren’t the same team that lost 44-6 in last season’s meeting.

On the latest edition of the Inside the Birds podcast, Adam Caplan and Geoff Mosher preview the opening game and try to answer the biggest questions currently facing the Eagles. 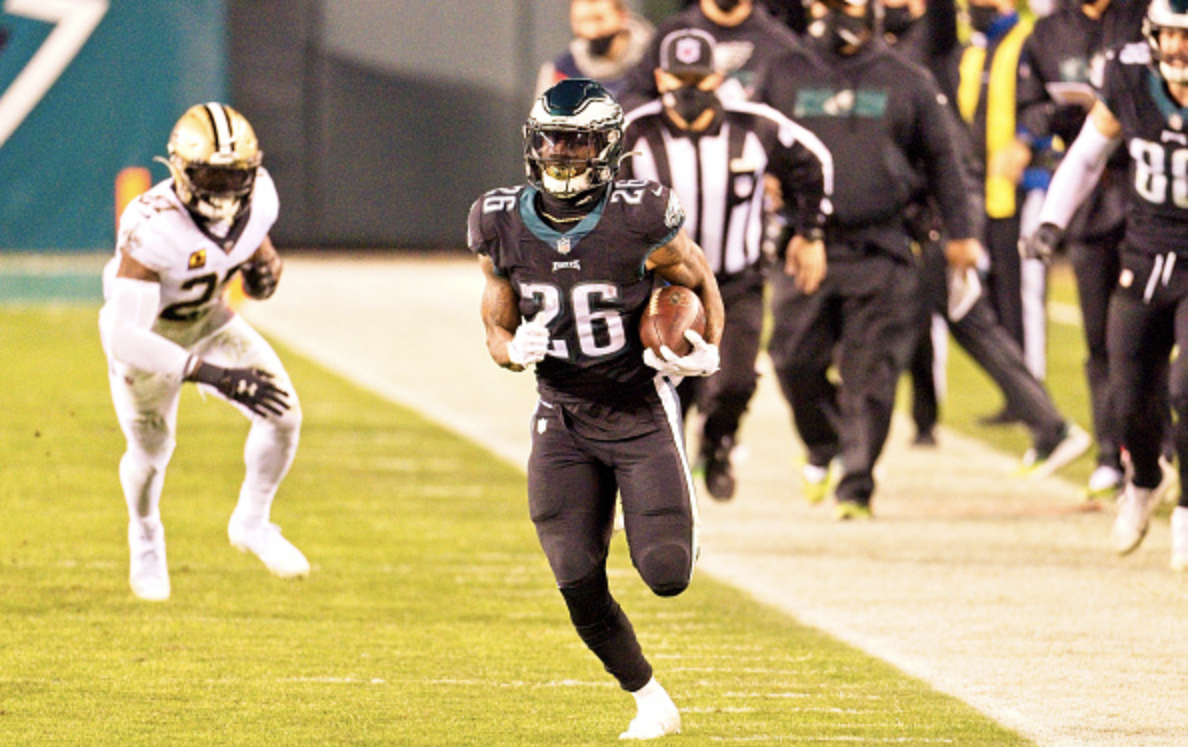 Getty Images: Miles Sanders will play but missed several weeks in camp from a hamstring injury.

Geoff Mosher: “What we’re hearing is they have looked at a couple of different guys at punt returner and Boston Scott would be the likely punt returner if Britain Covey is not going to be elevated…Maybe they are not ready to put the job in the hands of a rookie free agent in Britain Covey, who did not get that many opportunities in the preseason.”

Adam Caplan: “The last time he returned punts, he did six in 2019. He did not return any in college. Why would you do this? I understand it’s about ball security, but to me, it’s Greg Ward all over again. The reason why they cut [Covey] is because they didn’t really get a chance to do much in the preseason. They gambled, and they were right, that there was nothing on tape to make you want to claim him. The good tape was in practice, but no one has access to that. If it’s not Covey, I’d be surprised”

Caplan: “Here’s the thing with Sanders: This has been over a month. With his history of hamstrings, I just don’t see him playing [a lot] being out this long. I know the game’s indoors in Detroit. I don’t know if he has his usual amount of snaps.”

Caplan: “I don’t know that Sermon will play Week One. He just got here and their blocking scheme is more gap than zone, whereas the Niners were all zone…but he gives them what they want. They’ve been looking for a back with size. Sermon is that guy. At some point, he’s going to be the guy when it’s either short yardage or it’s four minute, which means when you have a lead in the fourth quarter, pound that rock with a guy with size. That’s why they claimed him off waivers.”

Mosher: “If you’re Shane Steichen, you kind of want to take your shots. You got Devonta Smith and A.J. Brown here, I think you got to take some shots.”

Caplan: “You got to come out throwing. Trust [Jalen] Hurts. I’m not saying they got to throw it 80 percent of the time in the first half, but it should be in the 60s. This should not be a run game for them. I know they ran all over them last year, but the matchups tell you – and Alim McNeil’s a much bigger factor now, now they have Aidan Hutchinson, [Michael] Brockers is healthy, Isaiah Buggs came over from the Steelers and is not a bad run defender – I expect them to throw the football here.”

Caplan: “Amon Ra St. Brown’s a good football player, but he is a possession receiver. You don’t worry about him, if he catches nine balls for 90 yards, it’s fine. Just don’t get beat over the top. Now, the Eagles have extensive experience against Josh Reynolds…and a guy the Eagles have always liked, D.J. Chark, unfortunately too many injuries, but a good player. Those are the guys to watch in this matchup. The guy you worry about particularly is Chark, because we know, and he’s 6’3 range, [Darius] Slay does occasionally struggle against bigger receivers.”

Mosher: “Now, Chark is big but he’s more lengthy and speedy. He’s not as physical. I think of him making some downfield catches more than fighting someone over the middle.”

Caplan: “I’ve got it Eagles 30-20 over the Lions. I’m just going by the matchups: the Eagles offense versus the Lions secondary. Tracy Walker’s a good safety, he’s really the only true good defensive back they have that’s proven. The Eagles should clean up. They’ll be able to protect. When they throw it, they’ll be successful.”

Mosher: “I have the Eagles 26-16 over the Lions…I’m buying a little bit of what the Lions are selling as far as being an improved team and what they have on defense and the offensive line, even with some of the injuries. I think they’ll be better.”