The 53-man roster cutdown deadline has passed, but the Philadelphia Eagles are continuing to make moves as they set their sights towards the regular season.

On a special live-streamed edition of the Inside the Birds podcast, formers Eagles wide receiver Jason Avant joined hosts Adam Caplan and Geoff Mosher to discuss the Jalen Reagor trade, other transactions and state of the roster. 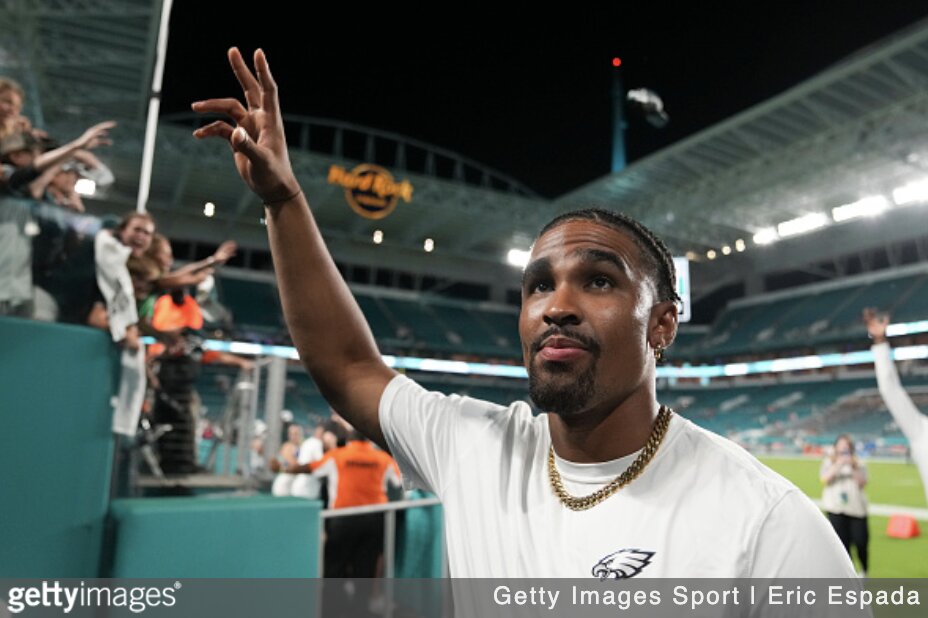 Jalen Hurts leads an Eagles offense that expects to be improved in the passing game.

Adam Caplan: “They have had on and off talks, easily for six weeks. So many teams asked about Reagor, but they could never get the great offer. What they really wanted was a third-round pick. That wasn’t happening. They came to a resolution. I think for both sides it was best that they moved on from Reagor, get a fresh start, get as much as you can.”

Geoff Mosher: “There were a lot of calls made. You don’t know if there’s an offer made. Sometimes, there’s discussions that do involve draft compensation or players, but it’s not an official offer. Denver was definitely at the end there, having discussions. I heard the Dallas Cowboys – who have issues at wide receiver right now – had discussions, the Bears (had discussions). At one point, the Texans and the Packers [had discussions]. Those were among the teams. Minnesota was the one that really emerged with an offer and wanted to get the deal done.”

Jason Avant: “I thought Jalen Reagor needed to be tougher, tougher mentally when it comes to dealing with fans and the city of Philadelphia, but that’s just a microcosm of what the issue is. If he has problems responding to fans or getting offended when fans say certain things, do you not think that’s going to apply to coaching? That’s going to apply to coaching, not being able to take constructive criticism the right way. If you’re not that person, this league will not coddle you.”

Caplan: “(Nick) Sirianni, we had heard, really wanted him to stay. Who else do they have on the back of the roster that knows the offense? Let’s say the top guys got hurt, he would have been with the offense two years in a row. He has positional versatility. Also, he can return punts. There was this misconception that Sirianni wanted him out. That’s not the case.”

Caplan: “He’s an athlete. He can move around a little bit. He’s on the 53, he was claimed off of waivers. He’ll be the third quarterback and now they also have a practice squad quarterback which is Sinnett. Book is an okay player. He’s definitely a third string quarterback.”

Avant: “I don’t necessarily like the idea of four quarterbacks. I just don’t think there’s enough reps in an NFL practice, because you want your second string guy to take some scout-team reps.”

Mosher: “Because Ian Book is sort of in that athletic, run-around mold – and Reid Sinnett is not – if you’re preparing Week 1 for the Lions and Jared Goff, you might have Sinnett running the look team. If you’re preparing for Russell Wilson, then maybe you get Ian Book in there.”

Avant: “This team will throw the football a bunch, and they’re justified in it. They have to figure out what they have in Jalen Hurts and they put so many resources in receivers and skill positions, they want to throw the football. They can always depend on the run game like they did last year  in order to make the playoff run, but they want to see what Jalen Hurts is and if this offense can be explosive.”

Caplan: “I was with an ex-coach in the league who was at one of the practices. He said it’s a timing-based offense. It’s a two-read offense for the quarterback, it’s RPO-based. If it’s off the two reads, he’s checking it down or he’s running.”

Mosher: “This is a guy that they wanted last year to make an impact as a rookie. He had a tough go of it. He came back in the second year in shape. This is a guy that doesn’t look like it, but for what they do up front, he can play a little head-up on the center and he can also give you a little bit of pass rush as a 3 technique. What they like is he can stop the run from a different array of line formations.”

Caplan: “Tuipuloto showed up in shape and he gave them that little bit of pass rush, which Greg Cosell told us about when watched his tape at USC. He looked exactly like they thought they were getting. Last year, he wasn’t in good enough shape. We were told he had a severe hamstring issue. He’s good to go there.”

Avant: “This is a totally rebuilt defense. The only person that can hold this back is Jonathan Gannon. The players are solid, and when you have a guy like Jaquiski Tartt that comes in and can’t make the team because (Marcus) Epps is balling out, you have the defensive front with Jordan Davis added and Nakobe Dean may not even play because of the depth, I think we’re going to see one of the better defenses in the NFL.”

Avant: “He’s the guy that you can’t get off the field. The only reason people don’t think that T.J. Edwards can’t play or didn’t get drafted is because of measure-ables: how fast he ran, how far he jumped. Some guys are just football players and when he’s in the game, he has a nose for the football and he’s always around the ball.”