Nothing But Throws For Hurts In Preseason Opener

The Eagles opened the preseason Friday night, losing 24-21 to the Jets at Lincoln Financial Field.

Read here for all my observations from the game.

The team won’t play another game at the Linc until Week 2, a Monday night showdown against the Vikings. The last two preseason games are on the road, as is their season opener against the Lions in Detroit on Sept. 11. 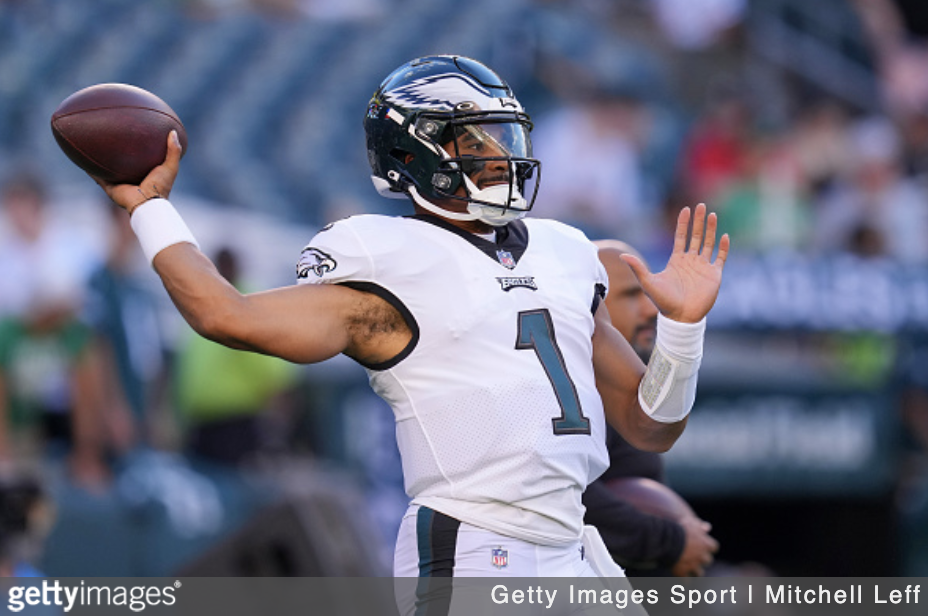 Eagles QB Jalen Hurts completed all six of his passes vs. the Jets in the preseason opener.

Here are some day-after points:

1. There’s a lot of curiosity about the Eagles’ offense this season, especially the passing game and its intended frequency. It’s worth noting the Eagles dialed up passes on every play of their 7-play, 80-yard touchdown drive to open the game. Hurts completed all six of his attempts and spread the ball to four different pass catchers, showing an understanding of where to go with the ball against specific coverages, and scrambled on another intended pass. The Jets play a base Cover 3 that Robert Sales brought from San Francisco. With a single safety usually deep, and the other in the box, the seams are usually open for quarterbacks if protection is there. That’s where Hurts didn’t most of his damage, especially on the 6-yarder to Jack Stoll and the 22-yard touchdown to Dallas Goedert. For one preseason series, Hurts and the Eagles appeared ready to open the offense. But it’s just one preseason series.

2. Snap counts can say a lot, even in the preseason. Second-year linebacker Patrick Johnson played 33 defensive snaps and 17 special-teams snap, getting most of his work with the second team. Those collective snaps signal that the second-year linebacker from Tulane is pushing hard to make the 53. Johnson played mostly as an overhang defender with the second team, which is the spot he played last year as Genard Avery’s seldom-used backup in run defense, when the Eagles showed a 5-2 front. Haason Reddick is the new strong-side linebacker/overhang defender, but every player needs a competent backup who can also contribute on special teams when not on the field.

3. Rookie center Cam Jurgens, a second-round pick, sure looked like an heir apparent in his first NFL action. Jurgens, filling in at center for All-Pro Jason Kelce, put forth some good reps, especially in pass pro and the screen game. He jumped out to cover the MIKE linebacker on Miles Sanders’ 12-yard screen catch on the second play of the opening drive. Jurgens, from Nebraska, is a tremendous athlete, and that showed in his debut.

4. It’s not a huge deal but I thought Nick Sirianni was out of line when he screamed at Jets coach Robert Saleh after the late hit on Hurts from linebacker Quincy Williams. Sirianni had every right to be passionate, ticked off, and agitated about his starting quarterback getting unnecessarily annihilated while going out of bounds, but screaming obscenities at the opposing coach? That’s over the top – unless he’s willing to accuse Saleh of coaching dirty or enabling late hits. Sirianni had that chance in the postgame press conference but backpedaled and praised Saleh as a “great guy” who he had “so much respect for.” Fans loved Sirianni’s reaction but they don’t see the hypocrisy of the moment: You can’t be Derek Barnett’s chief apologist and also scream at other head coaches for cheap shots.