[Editor’s Note: This is the fifth in a series of stories on InsideTheBirds.com by Andrew DiCecco recapping the Eagles offseason and looking to the 2022 season. Today’s story focuses on the the team’s area of most concern on offense.]

On paper, the Eagles don’t appear to have many glaring weaknesses offensively.

The combination of Brown and Pascal complements what the Eagles already had in rapidly improving speedster Quez Watkins and second-year sensation DeVonta Smith.

With Brown and Smith entrenched as starters, the Eagles, who have never had two 1,000-yard receivers in the same season, have the tandem in place to rewrite history.

The offensive line combines long-serving veterans with young upstarts, giving the team a chance to contend now and in the future.

Tight end was my initial area of concern, but with Dallas Goedert heading the unit, it’s tough to label the position a sore spot.

Still, given the physical nature with which Goedert plays the game, the Eagles would be wise to supplement the position with a capable backup.

For a young quarterback like Jalen Hurts, having a reliable outlet over the middle can be paramount.

When assessing offensive personnel and groupings, however, it’s evident that the running back room faces the stiffest test of any position group.

Fronted by polarizing fourth-year pro Miles Sanders, the Eagles backfield will come under intense scrutiny throughout the summer. 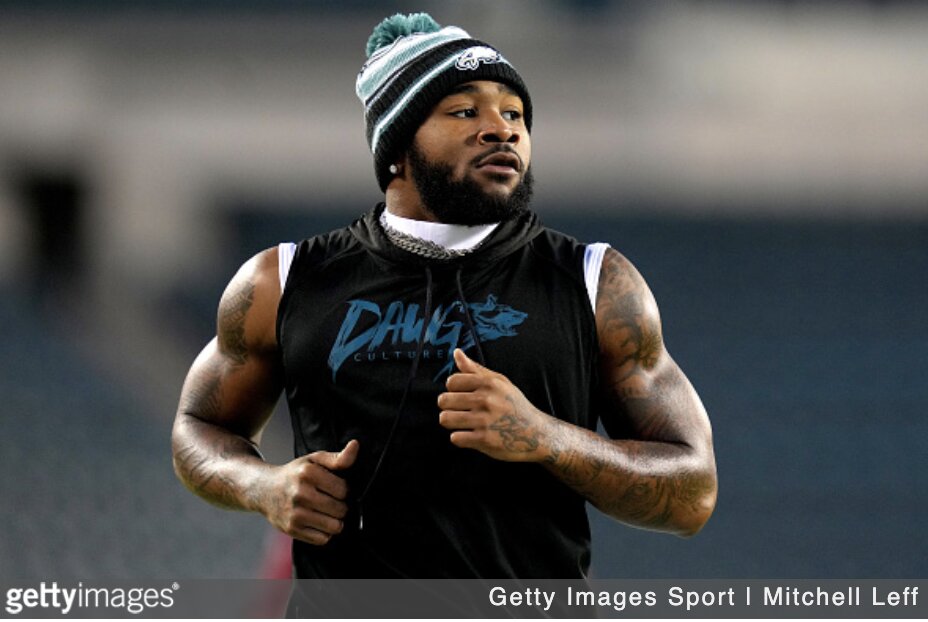 Eagles RB Miles Sanders enters the fourth and final year of his contract.

Though entering a contract year, Sanders has yet to truly offer a large enough sample size to earn the Eagles’ seal of approval of investing in him as their bell cow running back of the future.

Sanders’ glimpses of big-play potential have at times been equally as volatile as his usage, and he’s yet to become a consistent factor as a receiver. He also hasn’t completed a full season since 2019, his rookie season.

Three seasons into his pro career, Sanders has appeared in 40 games (34 starts), totaling 2,439 rushing yards and nine touchdowns on 480 carries and yielding 104 receptions for 864 yards and three touchdowns as a pass-catcher.

With one of the strongest offensive lines in football paving the way and a vast array of weaponry in the passing game, the 2022 campaign would appear to be a make-or-break season for the Penn State product’s Eagles career.

But, then again, if you’re still unsure of what you have in a player after three seasons, is it feasible to expect a sudden breakthrough?

Fifth-year running back Boston Scott and 2021 fourth-round pick Kenny Gainwell round out the unit, but both project as rotational backs.

Scott, who has started 10 games for the Eagles over the past three seasons, has performed well in spots, but is limited in terms of sustained output.

The diminutive runner provides toughness, outstanding contact balance working through traffic, and wiggle in the open field, but doesn’t offer a unique skill set that counters Sanders and is best suited as a third option.

A compact runner with soft hands who earned the confidence of the coaching staff early last season as a rookie, Gainwell could – and should – supplant Scott in the rotation as early as this summer.

The former Memphis running back racked up 291 rushing yards and five touchdowns on 68 carries and reeled in 33 passes for 253 yards a touchdown but is poised for an elevated role.

The expanse of that role is still to be determined, however, as the Eagles must first prioritize enhancing their running game with a much-needed power element.

As it stands, the reserves who currently complement Sanders are all too similar and also unequipped to carry the proverbial load should Sanders become unavailable at any point this season.