[Editor’s Note: This is the third in a series of stories by Andrew DiCecco on InsideTheBirds.com recapping the Eagles offseason and looking to the 2022 season. Today’s story focuses on the third-year player ready to break out.]

Much like the tantalizing wealth of emerging second-year talent on the Eagles, a host of third-year players are also poised to break out.

While Jalen Hurts remains the focal point and is sure to be examined under intense scrutiny in his second season as a starter, I anticipate a new-and-improved version of the 23-year-old quarterback.

I’m hardly suggesting that all of Hurts’ flaws will suddenly vanish, but if there’s something one would be hard-pressed to argue against: Hurts isn’t one to shy away from putting in the necessary work.

Whether he’s talented enough to serve as the Eagles’ franchise quarterback for the foreseeable future remains to be seen – and I don’t suddenly expect a top-eight ranking – but I feel confident improvements will be made.

Davion Taylor is an interesting case, as the 23-year-old linebacker was essentially a non-factor as a rookie but flashed on occasion with extended looks in Year 2.

Taylor’s speed, athleticism, and range is undeniable, but the consistency, mental lapses, and injury history have been his proverbial Achilles heel.

Factor in the additions of Kyzir White in free agency, Nakobe Dean in the draft, and last year’s emergence of T.J. Edwards, and it’s hard for me to envision Taylor etching out a big enough role to constitute a breakout season.

Although Jalen Reagor isn’t my candidate of choice and will have to fight for snaps, the 2020 first-round pick could feasibly be the third-year player who makes the biggest jump, simply because he’s yet to make much of an impact.

Literally any return of investment could conceivably put him in the conversation.

As it stands, Reagor is already behind A.J. Brown, DeVonta Smith, and likely Quez Watkins, so it’s unsure where and how he fits in this rotation.

As I continue to say, both Reagor and the Eagles would greatly benefit from a fresh start.

Which brings us back to Quez Watkins, the third-year pro whom I believe best fits criteria as a breakout candidate, from a skill set and circumstantial standpoint. 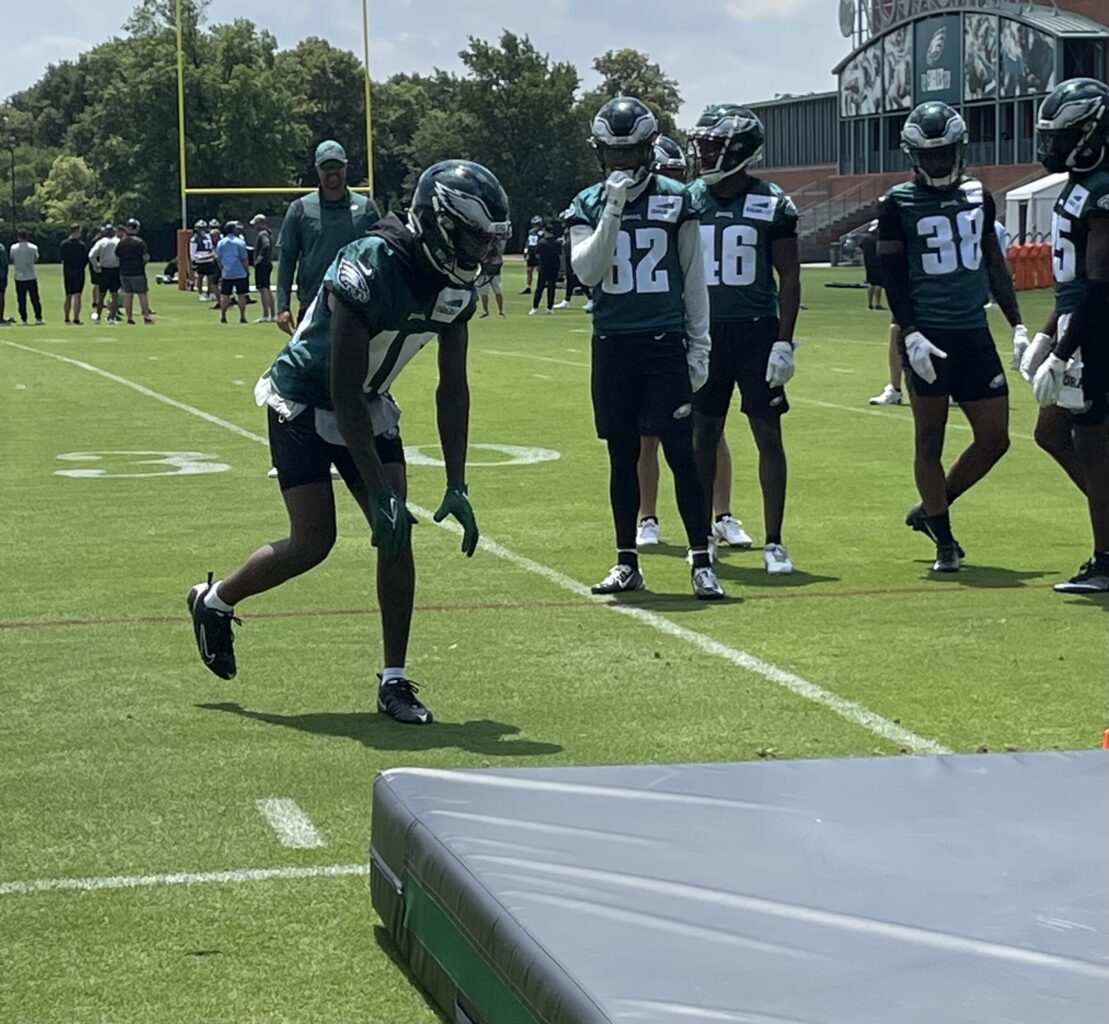 This season, the 24-year-old pass-catcher likely finds himself third on the receiving depth chart, a role in which he’s best suited.

With all of the attention devoted to slowing down Brown and Smith, Watkins should expect to have more opportunities to win downfield and thrive against single coverage.

I also was impressed by the manner in which the 6-foot, 194-pound receiver adapted to aligning on the inside last season, a foreign role compared to what’s been asked of him throughout his football career, where his electrifying speed served as a human cheat code on the perimeter.

Last season, Watkins showcased marked improvement as a route-runner, with savviness to find the soft spots in zone and willingness to fight for the ball in traffic despite lacking the prototypical frame.

I saw a player who progressed, be it gradually or substantially, in some facet every week.

With his increased opportunities, coupled with his steady evolution as a receiver and growing rapport with quarterback Jalen Hurts, look for Watkins to have more big-play opportunities.

While I don’t envision Watkins as a volume receiver who will threaten the 1,000-yard barrier, the former Southern Miss speedster figures to be a difference-maker in a reduced role and has been a remarkable story of development – a trend that should continue.