In this edition of “DiCecco’s Draft Notebook,” highlighted are a number of offensive prospects who stood out at the NFL Scouting Combine and could find themselves on the Eagles’ radar.

On Wednesday, we’ll take a look at the defensive standouts. 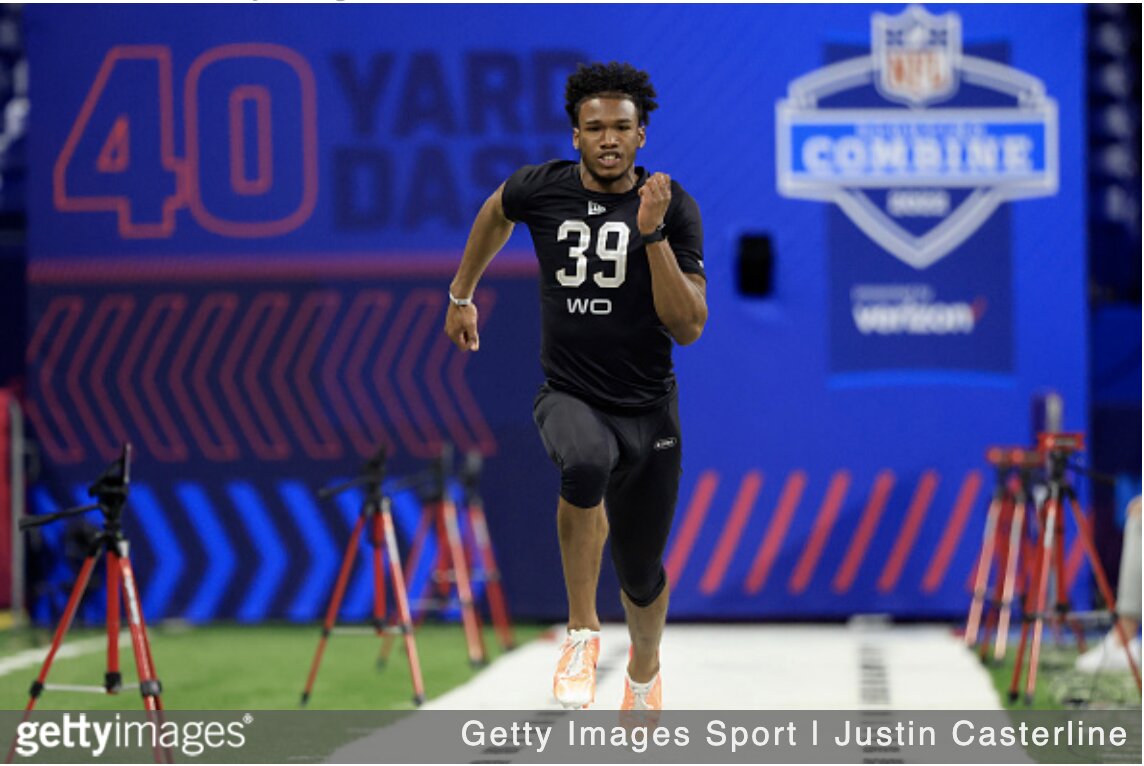 Sure, it’s not likely the Eagles burn one of their premier picks on a quarterback, but if they did, Liberty’s Malik Willis would be a logical choice.

The Eagles desperately need a big-bodied wide receiver to complement DeVonta Smith, but it remains to be seen how they decide to invest in the position. Fortunately, the team will have a deep pool of talent from which to choose during the draft.

Though its highly unlikely the Eagles invest a premium selection to fortify the position once again, they could benefit from either of the revered Ohio State pass-catching tandem of Chris Olave and Garrett Wilson, each of whom likely cemented his status as a first-round pick thanks to standout showings in Indianapolis.

Wilson recorded a 4.38 40-yard dash (eighth-fastest time for wide receiver) and 36-inch vertical, while Olave turned in a 4.39 40-yard dash (ninth) and 32-inch vertical. Both players looked as advertised in the on-field portion of the workout, as well. Wilson, in particular, has positioned himself to claim the distinction of being this year’s top receiver taken.

If the Eagles were to invest in a first-round pass-catcher, Olave would be more likely to fall within their range.

Additionally, a pair of prospects who may have entered the week as intriguing, albeit relative unknowns – North Dakota State’s Christian Watson and Cincinnati’s Alec Pierce – were among those who seized the opportunity to make an impression.

Watson (6-4, 208) produced a 4.36 40-yard dash and 38.5-inch vertical jump. The North Dakota State standout improved exponentially as a route-runner last season for the Bison, reeling in 43 receptions for 801 yards and seven touchdowns.

Pierce (6-3, 211) turned some heads with his blistering 4.41 40 time and soaring 40.5-inch vertical jump. The former Bearcat turned in his best season as a senior, notching 52 receptions for 884 yards and eight touchdowns.

Pierce plays a physical brand of football, aggressively attacking the catch-point and consistently coming down with contested catches, and can impact all three areas of the field. He also has extensive special teams experience.

Former SMU wideout Danny Gray, a Day 3 favorite of mine and someone I wrote about last week, posted a 4.33 40-yard dash and a 34-inch vertical leap. Expect his momentum to continue throughout the pre-draft cycle.

As far as tight ends, Virginia’s Jelani Woods (6-7, 259) caught my attention after registering a 4.61 40. Woods needs development on his play-strength to reach his full potential and could stand to add another 10 pounds to his frame, but his intangibles lend itself to becoming an early contributor as a rookie.

Walker ran a 4.38 40 and particularly dazzled in the on-field portion of the workouts, where his balance, burst, and quickness were on full display. Hall clocked a 4.39 40-yard dash and posted a 40-inch vertical.

The former Cyclone has translatable traits to become an instant-impact rookie, and his vision and contact balance have always stood out.

Name to keep an eye on: South Dakota State’s Pierre Strong Jr. Last season, Strong rushed for 1,673 yards and 18 touchdowns and finished as a runner-up for the FCS Walter Payton Award.

Strong’s an explosive home-run hitter and has tremendous short-area quickness. He best projects as a third-down option at the next level. If the Eagles presumably wait to add a running back, they could potentially consider Strong at No. 121 or 152.

While Walker is likely to elude the Eagles, Hall or Strong could be prospects to watch in the middle rounds.