Pick Of The Leader

Landover, Md. – The Eagles drew one step closer to an elusive playoff spot with a narrow 20-16 victory over the Washington Football Team at FedEx Field.

Washington quarterback Taylor Heinicke was red-hot early, completing 14-of-17 pass attempts for 170 yards at the break, but the polarizing Jonathan Gannon-led defense eventually bounced back with enough time to pry the game away and keep the season alive.

“We just couldn’t get things rolling in the third quarter,” Heinicke said after the game. “When they got the ball first and they go down for seven and a half minutes, defense is tired. And then it’s tough when you have almost a three-and-out and the defense is right back on the field. It’s tough on them

“The third quarter we had the ball for, like, maybe 45 seconds, so it was tough. The fourth quarter, we started to get things going, get a couple first downs. We had a chance there at the end. Unfortunately, I thought it should have been called, but that’s football. That safety [Rodney McLeod] made a hell of a play. Great catch. Just unfortunate.”

Eagles quarterback Jalen Hurts engineered a rhythmic passing game, completing 65 percent of his passes and posting a 90.9 quarterback rating on his way to completing 17-of-26 passes for 214 yards. He also accumulated 44 yards on seven rush attempts.

An Eagles rushing attack, headed by Boston Scott and Jordan Howard this week, was largely bottled up, though that hardly thwarted the team’s successful blueprint. The duo combined for 25 carries, 73 yards and a pair of touchdowns.

The Eagles also won their fourth straight win and have won six of their last seven after a 2-5 start, clinching a winning season after a terrible 2020. 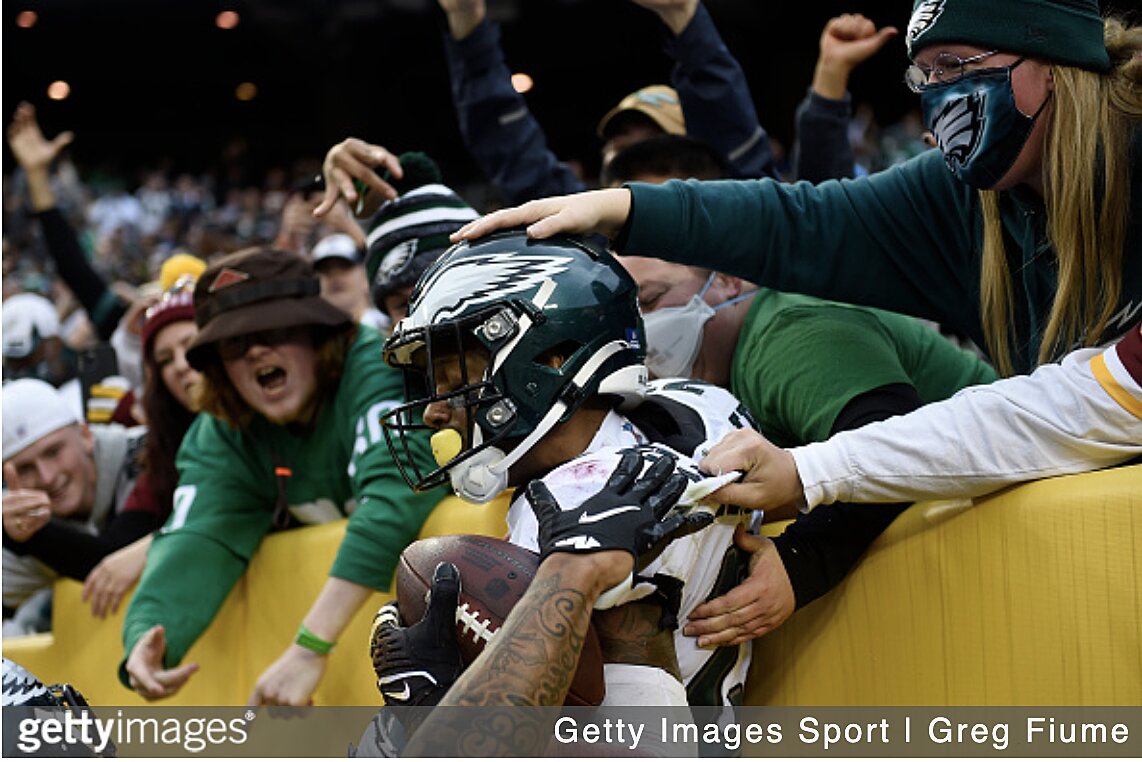 1. The Eagles’ defense has been lauded for its improved play in recent weeks. However, Heinicke and Co. managed to effortlessly march downfield on the opening drive with a balanced, six-play, 67-yard scoring drive that included passes of 16 and 24 yards to wide receiver Cam Sims and tight end John Bates, respectively. The possession culminated in an 11-yard Jaret Patterson touchdown run. Through his first two possessions, Heinicke completed 7-of-7 pass attempts for 97 yards as he became the latest signal caller to dissect the short-to-intermediate areas of the field against the Eagles. While the Eagles have found success against the likes of quarterbacks Zach Wilson, Garrett Gilbert, and Jake Fromm, Jonathan Gannon and his unit proved they still have a long way to go to contend with playoff-caliber opponents.

2. I liked Sirianni’s aggressiveness on both early fourth-down attempts. The second attempt, a two-yard Boston Scott touchdown run, capped an 11-play, 80-yard drive in which the Eagles carved up a hapless Washington defense. Though it would have been demoralizing to come up empty once again in a must-win game, the willingness to lean on the team’s strongest unit – the offensive line – was an encouraging sign of a young coach committed to the offense’s reconfigured identity and philosophy.

3. One of Jalen Hurts’ most glaring deficiencies has been his inability to execute a rhythmic passing game early. In his three priors starts, Hurts had been skittish in the pocket, late on reads, and his ball placement has been inconsistent. However, Hurts flipped the script against the Football Team, completing 9-of-11 first-half pass attempts for 116 yards, while adding 35 yards on three rushing attempts. Also, whether it’s the lingering effects of the ankle injury he sustained back in Week 13 or a newfound approach, Hurts has carried the ball just 17 times since his return to the lineup three weeks ago. Conversely, he continues to make strides as a passer, standing tall in the pocket in the face of pressure, keeping his eyes downfield, and allowing routes to develop. Promising developments from the second-year quarterback.

4. Though not as efficient as they’ve been in recent weeks, the Eagles refused to deviate from their successful run-heavy blueprint, calling for 26 passes against 34 rushing attempts. Scott, starting in place of an injured Miles Sanders, averaged just 3.4 yards per carry while Jordan Howard averaged 2.4. Collectively, the running game yielded 34 carries for 118 yards and two touchdowns. The offensive line wasn’t in top form, but a multi-dimensional running game has remedied an erratic passing game. In staying consistent with the formula, I thought Sirianni exhibited growth, confidence, and poise. The first-year head coach has made exponential strides amid the second-half surge.

5. In our ITB Scouting Report, we highlighted Josh Sweat as a key defender to watch. Sweat, who entered Week 16 second on the defense with 6.0 sacks, collected 1.5 more. While the fourth-year defensive end hasn’t quite lived up to the three-year, $40 million contract extension he signed back in September, the rangy edge rusher has feasted against patchwork offensive lines. Sweat is undoubtedly the team’s most pure pass-rusher, so his late-season surge could prove to be timely as the Eagles look to complete a playoff push.

6. Sweat wasn’t the only member of the Eagles’ defensive line who proved to be disruptive. The unit combined for five quarterback hits and three sacks. The high-priced tackle tandem of Fletcher Cox and Javon Hargrave produced consistent interior pressure and collapsed the pocket while a rotation of defensive ends bore down off the edge. Gannon didn’t send much pressure, but you’d like to see the first-year coordinator unleash the deep arsenal of pass rushers at his disposal, particularly against higher-caliber quarterbacks.

7. Eagles special teams were without aces Andre Chachere (Reserve/COVID-19) and Shaun Bradley (shoulder). Rookies JaCoby Stevens and Kary Vincent, Jr. were tasked with filling the void. Stevens, appearing in his first NFL game, made a nice play in coverage. Aside from a 34-yard opening kickoff return, Washington returner Deandre Carter didn’t have an opportunity to impact the game. Punter Arryn Siposs also landed both punts inside the 20-yard line. The Eagles have a young nucleus on special teams – including coordinator Michael Clay – but they have discovered a number of promising building blocks.

8. As I’ve noted repeatedly, Sunday reinforced just how desperately the offense needs secondary options to complement Dallas Goedert and DeVonta Smith.  Scott, a backup running back, was third on the team in receiving with 39 yards on four catches. Quez Watkins managed only two receptions for 15 yards while Reagor was once again blanked on the stat sheet – save for a botched running play in the first quarter that netted a 3-yard loss. Over the past five games the duo has combined for 20 catches for 265 yards and zero touchdowns on 23 targets. Both players have roles as specialists, but neither can be considered a viable, consistent option. That must be among the primary offseason priorities.

9. Securing Avonte Maddox with a three-year contract extension in November certainly qualifies among the team’s most savvy moves of the season. The fourth-year slot cornerback turned in a stellar performance, compiling four tackles and a key pass defended on fourth down late in the game. The questionable pass interference penalty on the short pass to Terry McLaurin in the fourth quarter was the product of tight coverage, and his 4th-and-4 breakup with 7:36 left in regulation four plays later highlighted Maddox’s outstanding instincts and closing speed. Darius Slay aside, Maddox has been the team’s top backend performer.

10. Sunday had the feel of a gritty playoff win, and the resolve could perhaps serve as a launching pad into next week and beyond. The offense picked up the defense in the early goings, and the defense found its footing after a rocky start, ripping through a porous Washington offensive line and applying consistent pressure on Heinicke. The offense must find ways to play a complete game and will have to exchange field goals for touchdowns against more formidable opponents, however. Next week, against a surging Cowboys team, could serve as a measuring stick with the playoffs potentially looming.