As the Eagles attempt to forge their own path in a clouded NFC playoff picture amid a crucial two-game slate, its reconstructed offense was potentially dealt a deathblow when running back Miles Sanders, who accounted for 454 rushing yards in six games since returning from a late October ankle injury, suffered a broken hand in the team’s 34-10 triumph against the Giants.

Jordan Howard, the thunder to Sanders’ lightning, sustained a stinger in the game and could also miss some time. Since his Week 8 practice squad elevation, Howard has compiled 380 rushing yards and three touchdowns. 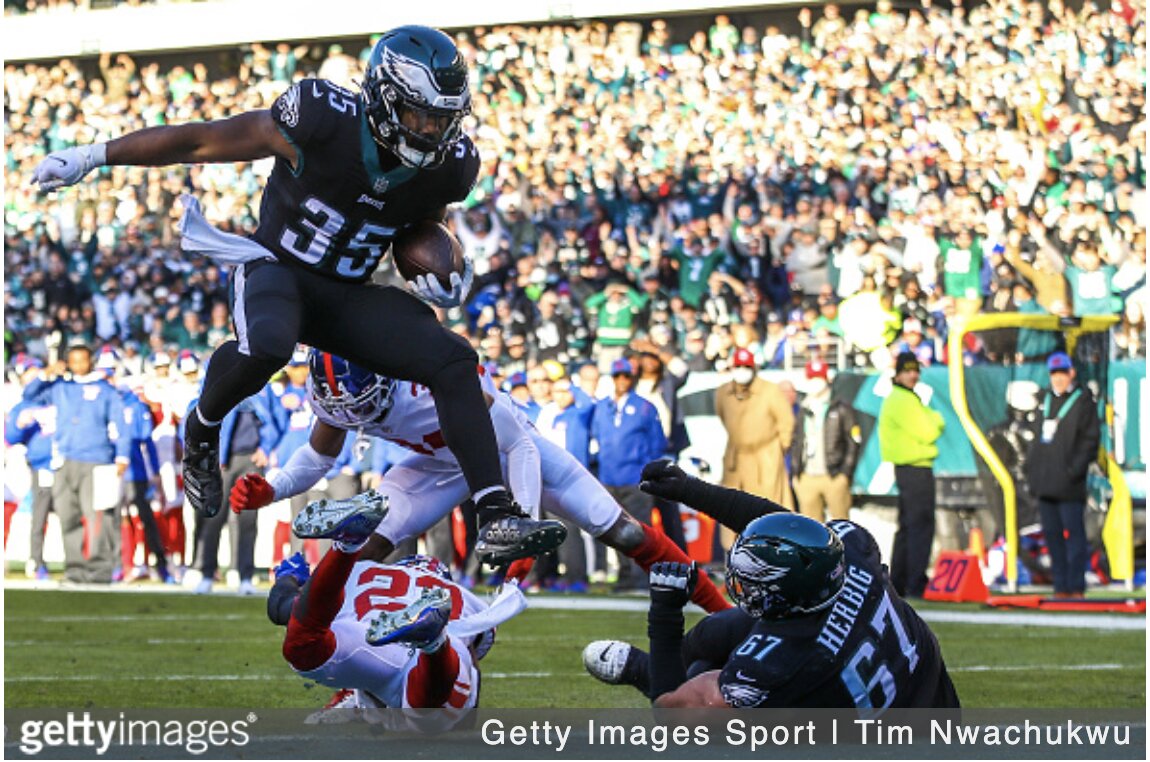 Head coach Nick Sirianni on Monday declared Sanders out for the next showdown Sunday against the Washington Football Team at FedEx Field, adding that he’s more “hopeful” that Howard can play.

The running back tandem has keyed the Eagles’ newfound offensive philosophy, which underwent a drastic second-half turnaround that produced 834 yards and three touchdowns.

But the productive two-headed rushing attack benefited the offense much more than by simply just alleviating pressure from an uneven second-year signal-caller in Jalen Hurts. The committee also provided balance and a sorely needed physical dimension to a unit lacking identity.

The reconfigured approach unlocked a dominant offensive line, allowing the line to reset the line of scrimmage and pave running lanes with little resistance.

Sanders served as the explosive, home-run hitter while Howard complemented as the between-the-tackles grinder.

In place of Sanders, and perhaps Howard, will be backups Boston Scott and Kenneth Gainwell. Both will be presumably be tasked with elevated roles in the final two games.

“Obviously, Miles will be missed, but we feel good about those guys,” offensive coordinator Shane Steichen said Tuesday. “Miles was out early in the season and those guys stepped up and ran the ball well.

“They did a heck of a job for us, so we feel good about those guys. They’ve been doing a good job all year and we hope to continue that trend on Sunday versus Washington.”

Gainwell, who has carried the ball just 55 times through 15 games, figures to continue his role as a situational change-up runner who also features prominently in the receiving game.

Scott, however, will likely ascend to the top of the depth chart once again and handle the lion’s share of carries.

Scott, who has 73 carries for 326 yards and five touchdowns this season, finds himself in an all-too-familiar position.

Two years ago, it was Scott, then a relative unknown, who invigorated an underwhelming Eagles rushing attack to catalyze a playoff push, totaling 151 rushing yards and four touchdowns over the final four games.

Given the volatile nature of the passing game this season, Scott could feasibly become a critical component to navigating a turbulent offense through the final two games of the season.

“Very confident in him,” Steichen said. “Like I said earlier in the season, he’s played a lot of football and every time he has to step in and play, I mean, he does a heck of a job.