At 7 p.m. Tuesday, the Philadelphia Eagles (6-7) will host the Washington Football Team (6-7) at the Linc to kick off a crucial four-game stretch of divisional play.

Washington looks to get back on track and regain control in the playoff race after falling to the Cowboys, 27-20, while the Eagles enter the game fresh and relatively healthy. 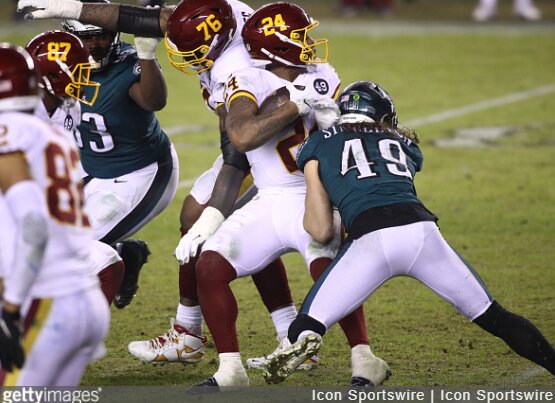 WR DeVonta Smith vs. CB William Jackson III: With Kendall Fuller on the COVID-19/reserve list, Jackson is likely to draw Smith in coverage. Smith has been virtually non-existent the past two games, turning in just four receptions for 37 yards on eight targets. The rookie is one of two reliable Eagles pass targets and is learning how to adjust to the extra attention, but this is an ideal spot for him to get back on track, reestablish continuity, and reset for the stretch run.

TE Dallas Goedert vs. Washington LBs: Coming off a career-high 105-yard outing against the Jets, Goedert should be the product of a concerted effort by the Eagles to get him involved early. The big-bodied tight end presents matchup conundrums for linebackers and safeties, and his last showcase was a reminder of how someone with his abilities can take over a game. Washington’s linebackers and safeties are largely slow-footed and beatable – particularly their safeties — so expect to see Goedert work the seams quite a bit. Whether it’s Jalen Hurts or Gardner Minshew pulling the trigger, Goedert should not see fewer than 6-to-8 targets.

DE Josh Sweat vs. T Cornelius Lucas: Sweat is second on the Eagles in sacks (5.0) and quarterback hits (11) but has been anything but consistent since signing a three-year, $40 million extension in September. The uber-athletic fourth-year pro is ideally suited to be a third defensive end in a rotation to preserve his effectiveness, but in past matchups against replacement-level starters — which he’ll see tonight — he’s lived up to his billing.

CB Darius Slay vs. WR Terry McLaurin: McLaurin has inexplicably been a non-factor the past three weeks, reeling in just seven receptions for 73 yards and zero touchdowns. The third-year receiver was blanked on the stat sheet last week, and it’s tough to envision a scenario in which he overcomes a daunting matchup against Darius Slay and a limited backup quarterback throwing to him. Slay, who has performed at an All-Pro caliber level this season, projects to have a relatively quiet evening, despite the presumed pass-happy game script.

Kicker Brian Johnson makes his third appearance of the season. The rookie converted his lone field goal attempt of 48 yards and is 2-of-3 on extra point attempts (67 percent). Three of his 8 kickoffs have been touchbacks. Punter Tress Way has logged 2,108 yards on 43 punts (49.0 yards per punt).

As of this moment, Washington will be missing two of its top three contributors, linebacker David Mayo and safety Troy Apke (both COVID-19/reserve). Safety Deshazor Everett (283 snaps) is the ace of the unit but might be thrust into a more substantial role with fellow safeties Apke and Kamron Curl on the mend. Something to keep an eye on.

For Philadelphia, wide receiver Jalen Reagor serves as the kick and punt returner. He has managed 229 yards on twelve kick returns and 148 yards on 23 punt return opportunities.

Philadelphia has won six of the last eight games against Washington, three of the last four of which came at Lincoln Financial Field.

Eagles LB T.J. Edwards: Behind a backup quarterback, look for Washington to take to the ground game early in an effort to get Antonio Gibson into a rhythm. Gibson, who is averaging 21 carries a game over the past five weeks, offers the size to bulldoze his way to yardage between the tackles and the explosiveness to rip off chunk plays on the perimeter. However, the Eagles’ run defense noticeably improved once Edwards was inserted into the MIKE position, and they’ll need to rely on his downhill physicality and tenacity at the point of attack to plug running lanes and cover ground on the perimeter — essentially, force Washington to become one-dimensional. The defensive line should encounter little resistance getting home, but it all starts with Edwards and the tone he sets.

Washington WR Adam Humphries: Humphries season totals aren’t going to blow you away – 33 receptions for 341 yards and two touchdowns on 46 targets – but backup signal-callers tend to lean on their safety valve as a crutch when pressure mounts. Humphries has the route-running prowess to find the openings in zone and can serve as an effective chain-mover , but he typically won’t win vertically. Look for Washington’s QB to make quick, safe throws, with many targets going in Humphries’ direction. The Eagles will have to tighten their short-to-intermediate coverage and force throws outside the numbers.

Undermanned and overmatched, moving the game to Tuesday is only delaying the inevitable for the Washington Football Team, who will likely be without several key contributors. The Eagles will surely head into this game with added motivation and run away early in what should be a resounding, double-digit victory.