The Philadelphia Eagles (5-7) return to MetLife Stadium for the second consecutive week, this time for a 1 p.m. tilt against the New York Jets (3-8).

Coming off a deflating 13-7 loss to the New York Giants, the Eagles will look to add to the win column as a murky playoff picture gradually begins to establish clarity, while the Jets look to build off Sunday’s 21-14 win over the Texans. 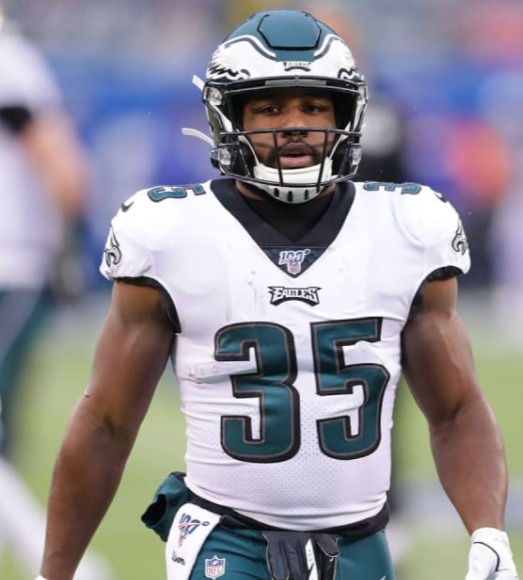 Getty Images: Boston Scott should see a heavy dose of carries vs. the Jets

WR DeVonta Smith vs. CB Bryce Hall: Smith was limited to just two receptions for 22 yards last week against the Giants, but he’ll have an opportunity to rebound against a woeful secondary. Smith, one of only two viable receiving options for the Eagles, will likely tangle with Hall much of the afternoon. Hall, a Harrisburg, Pa., native, has been targeted 64 times, allowing 43 receptions for 554 and five touchdowns across 11 starts. Expect Smith to be heavily targeted early on, allowing the rookie pass-catcher to regain traction heading into the bye week.

Eagles RBs vs. Jets Front Seven: The Eagles ran the ball 33 times for 208 yards and a touchdown a week ago and arguably face an even more inviting matchup to exploit this week. On the heels of a largely dismal offensive showing that included just 129 passing yards, look for the game plan to involve taking the ball out of the quarterback’s hands early and leaning on the running game to generate rhythm and cohesiveness. Boston Scott (more on him later), in particular, boasts a style that translates favorably this week.

LB Alex Singleton vs. RBs Ty Johnson, Tevin Coleman: Singleton performed admirably a week ago, totaling 11 tackles (three for loss) and a pass defended, but he’s proven to be a player who’s at his best when deployed sporadically to preserve his energy and tenacity – and mask limitations. Earlier this season, Singleton and Eric Wilson formed a bumbling tandem that struggled mightily defending the run. While the Jets don’t exactly offer an embarrassment of riches at the skill positions, I anticipate a game plan devised to run the football downhill with Johnson and Tevin Coleman. Both running backs are far from dynamic, but given the limited resources offensively, I’d expect Johnson to see a formidable workload in the running and passing game. Will be interested to see how Singleton holds up.

CB Darius Slay vs. WR Corey Davis: Davis, first on the Jets in receiving yards (477), tied for first in touchdown receptions (four) and second in targets (56), faces a daunting matchup against Slay, who is playing at an All Pro level. Slay should have little trouble slowing the Jets’ top receiving option. Influenced by the Eagles’ pass rush and the inevitable blunders that typically go hand-in-hand with inexperienced quarterbacks, I suspect Slay comes up with his fourth interception of the season on Sunday.

For Philadelphia, wide receiver Jalen Reagor serves as the kick and punt returner. He has managed 229 yards on ten kick returns and 128 yards on 22 punt return opportunities.

The Eagles own an 11-0 all-time record against the Jets, a mark that stands as the most wins without a loss by any NFL franchise in a head-to-head series.

Eagles RB Boston Scott: Officially listed as questionable due to an illness that kept him away from the practice field this week, Scott could draw a dream matchup against a vulnerable Jets run defense. Scott’s no-nonsense, between-the-tackles running style projects favorably against an undermanned New York interior and second level and he’s coming off of a game in which he out-carried Miles Sanders 15-9. If active, expect a heavy dose of Scott with Jordan Howard remains on the mend.

Jets WR Jamison Crowder: The Eagles have struggled defending short-to-intermediate areas of the field this season, which is where Crowder typically thrives. The savvy slot receiver leads the Jets in receptions (38) and is third on the team in yardage (310) and receiving touchdowns (2) despite playing in just eight games this season. The veteran pass catcher acts as a security blanket and chain-mover in the Jets’ offense. While not overly dynamic or explosive, Crowder is elusive in space, knows how to find the soft spots in zone, and should lead his team in targets and receptions on Sunday.

Whether it’s Jalen Hurts or Gardner Minshew at the helm, the Eagles should cruise to victory against a team that’s flawed in all three phases. Last week’s stunning loss to the lowly Giants proved the Eagles simply can’t afford to overlook any opponent, however, and must view each week as a must-win to keep its playoff hopes alive. The Eagles get back into the win column this week and put a bad team away early.