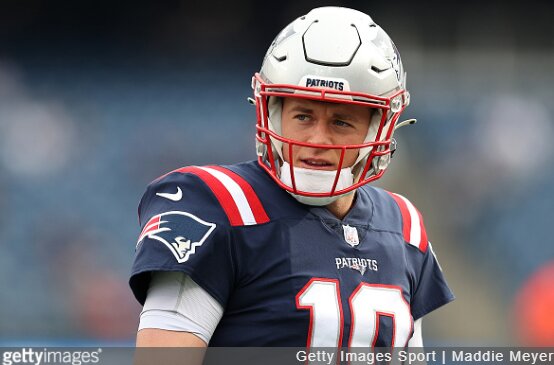 Mac Jones is staking his claim for top NFL rookie

1) Tennessee Titans (8-2; ranked last week: #2): How could they not be in this spot? No matter what the injury circumstances have been, they continue to find a way to win, which is an indication of how good of a job their coaching staff is doing. Also, the players continue to buy in to what they’re asked to do every week during the team’s six-game win streak.

4) Dallas Cowboys (7-2; ranked last week: #5): Great bounce-back win after their Week 9 embarrassing performance against the visiting Broncos. However, their next 3 games are against teams with winning records.

5) Los Angeles Rams (7-3; ranked last week: #3): It’s odd that the Rams have now lost 5 in a row against the 49ers. And while they still may be the better team and clearly have a better roster, you have to wonder what’s been happening to their offense the last two weeks.

6) New England Patriots (6-4; ranked last week: #10): Yeah, time to take this team seriously after four wins in a row and five out of six. QB Mac Jones is really improving each week and will get strong consideration for Rookie Of The Year if he continues to play this well.

7) Buffalo Bills (6-3; ranked last week: #9): Well, you didn’t believe they would lose to the Jets and against another team well under .500? The reality is that in any week a bottom feeder team (see Jaguars) is capable of beating anyone. That’s the NFL these days. But it was good to see the Bills bring it on both sides of the ball last week.

8) Tampa Bay Buccaneers (6-3; ranked last week: #6): Hard to understand how they came out so flat after their bye week. And the injuries at CB continue to be a big concern.

9) Kansas City Chiefs (6-4; ranked last week: #12): That’s three wins in a row and four out of five. It seems that whenever they’re in a small tailspin, they’re able to turn it around. And that’s a tribute to the coaching staff and players for execution.

10) Baltimore Ravens (6-3; ranked last week: #7): They were not prepared for what the Dolphins did defensively last week. It will be interesting to see if other teams blitz and disguise like the Dolphins did last week to the Ravens offense.

12) Los Angeles Chargers (5-4; ranked last week: #11): After a great start for the season at 4-1, they’ve lost three out of their last four games, and they’re yet another team with a losing record at home after 10 weeks.

13) Cleveland Browns (5-5; ranked last week: #13): I still believe in this team and they’re not even out of the AFC North race or even a Wild Card spot. Their injury situation is concerning, which is a valid reason for the inconsistency from week to week.

14) Indianapolis Colts (5-5; ranked last week: #19): It wasn’t pretty, but last week’s win over the visiting Jaguars got them finally to .500. However, the Colts schedule is about to get much tougher with only two out of their final games against teams with losing records.

15) Carolina Panthers (5-5; ranked last week: #21): They beat up an injured Cardinal offense pretty bad last week and we’re about to see another starting QB change for the Panthers.

16) New Orleans Saints (5-4; ranked last week: #14): A two-game losing streak is a bit concerning, but there’s time to turn things around and both losses were by two points.

17) Las Vegas Raiders (5-4; ranked last week: 15): This last loss is troubling as the defense, which has been much improved this season, struggled mightily.

18) Denver Broncos (5-5; ranked last week: #17): Another bad loss at home, where they now have a losing record. Still, they’re very much alive for the AFC West crown and one of three AFC Wild Card spots.

20) Minnesota Vikings (4-5); ranked last week: #25): Last week’s game could have gone any which way, but they found a way to win. However, the problem with this team is that it has had a hard time sustaining success.

21) San Francisco 49ers (4-5; ranked last week: #23): Great, unexpected win over the Rams. But can they sustain some success? They’ve put up two great performances out of their last three games and still are in the NFC Wild Card hunt.

22) Philadelphia Eagles (4-6; ranked last week: #26): Heck of a win where most people thought they couldn’t win (except the linemakers). Weird situation where they’re 4-2 on the road but 0-4 at home.

23) Atlanta Falcons (4-5; ranked last week: #18): Like many people, I didn’t see this team being better than 5-6 wins, so they’re likely going to be ahead of schedule considering their roster needs several upgrades.

24) Chicago Bears (3-6; ranked last week: #24): Let’s see if they can build off rookie QB Justin Fields’s second half against the Steelers, where he was outstanding.

25) Seattle Seahawks (3-6; ranked last week: #20): Their defense continues to improve, but getting Russell Wilson back last week didn’t prove to be much of an improvement for their struggling offense.

26) New York Giants (3-6; ranked last week: #22): They started to play much better before their Week 10 bye. The key is the improvement on defense over their past three games.

28) Miami Dolphins (3-7; ranked last week: #27): Two wins in a row is something that didn’t look possible a few weeks ago, but give their coaches credit for keeping things together. They’re still a bad team, but at least there’s some hope for potentially turning things around.

29) Jacksonville Jaguars (2-7; ranked last week: #28): They’re really starting to play much better of late, but an infusion of talent next year is key for any type of serious growth.

30) New York Jets (2-7; ranked last week: #30): The Mike White experience ended before it really got steam. At least the Jets saw that he can be a quality backup.