In another sign that the Eagles are moving toward making linebacker T.J. Edwards the permanent starter, the team on Wednesday waived linebacker Eric Wilson, one of it’s significant free-agent signings.

Wilson, who signed a one-year deal worth up to $3.25 million, was a healthy inactive for the first time this season in Sunday’s 44-6 win over the Lions after already seeing diminished playing time for the prior three weeks. The Eagles went with Edwards and Davion Taylor as their starting linebackers in nickel, which was their predominant defense against the Lions. 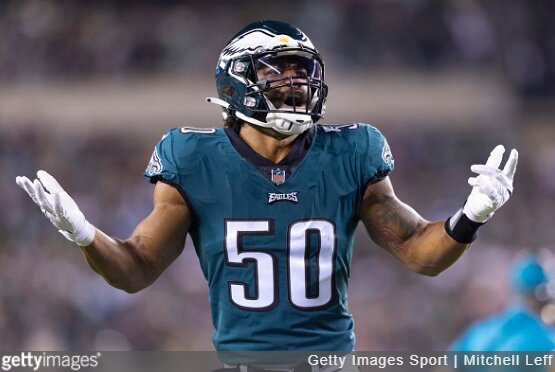 The Eagles waived Eric Wilson, one of their free-agent signings

Edwards, a third-year linebacker, posted a team-leading 14 tackles against the Lions, including two tackles for a loss, as the Eagles’ previously struggling run defense held Lions running back DeAndre Swift to 27 yards on 12 carries.

If he’s claimed off wavier, Wilson’s contract will transfer to the claiming team and the Eagles won’t be responsible for the non-guaranteed money that Wilson is owed.

Wilson is one of two former Vikings signed this offseason with the intention of starting and having experience in first-year defensive coordinator Jonathan Gannon’s scheme. Gannon coached defensive backs for the Vikings under head coach Mike Zimmer before joining the Indianapolis Colts’ staff.

Wilson, an undrafted rookie from Cincinnati in 2017, spent most of his time with the Vikings as a backup and special teams maven until starting 15 games in 2020 because of injuries to starters. He came to the Eagles with a reputation for excelling in coverage, especially zone, but also for being average in run defense.

Wilson played 85 percent of defensive snaps in the opener but under 70 percent of the snaps in Weeks 2 and 3 as the team’s run defense issues continued. Wilson played 73 percent in a Week 4 loss to the Chiefs, in which the Eagles struggled in both run defense and pass coverage, then saw his playing time decrease to 41 percent Week 5.

He finished his brief Eagles stint with 43 tackles, one quarterback hit, one pass defended, one interception and one tackle for a loss.