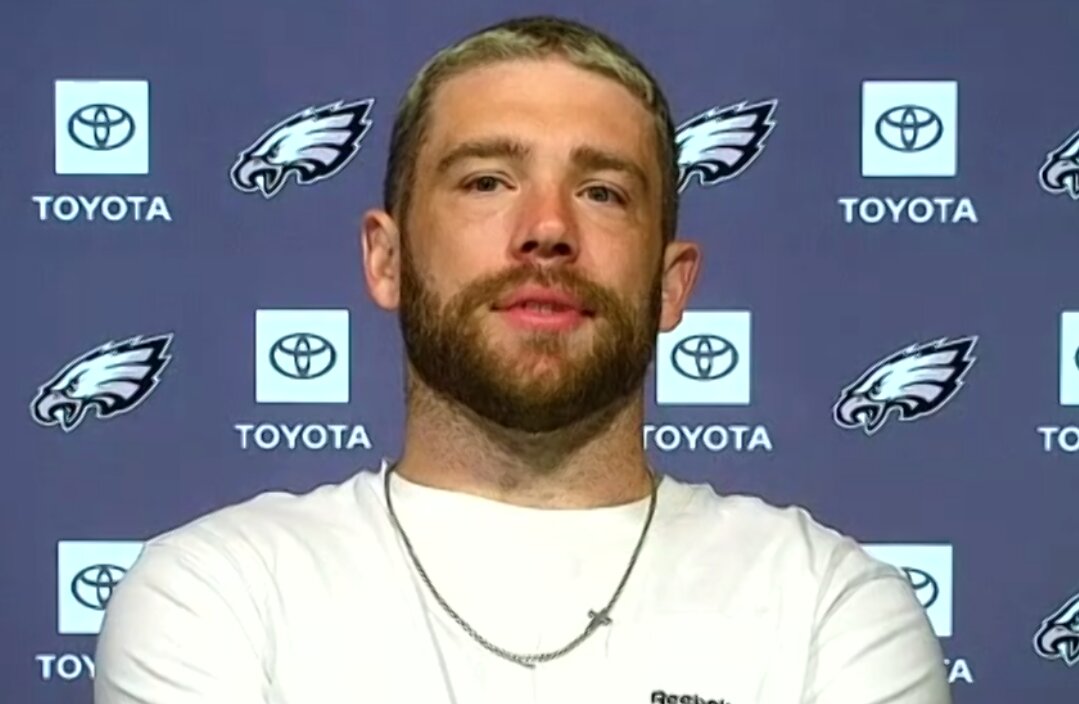 (ITB photo: Zach Ertz said it would be “an honor” to be inducted into the Eagles Ring of Honor)

The group of holdovers from the Super Bowl season has just become smaller.

The Eagles on Friday traded three-time Pro Bowl tight end Zach Ertz, who caught the game-winning touchdown in the franchise’s lone Super Bowl win, to the Arizona Cardinals in exchange for rookie cornerback Tay Gowan and a 2022 fifth-round pick.

In another sign the Eagles are transitioning into a new era under first-year coach Nick Sirianni, the Eagles dealt away their second-leading receiver and most experienced offensive weapon. Ertz, who caught his second touchdown of the season in Thursday night’s 28-22 loss to Tampa Bay, has 18 receptions for 189 yards, behind only rookie DeVonta Smith’s 27 receptions.

“It’s a hard day for us,” said Howie Roseman, the Eagles’ executive vice president of football operations. “It was about opportunity. Opportunity for us and for Zach.”

Roseman and Ertz both acknowledged that the deal had been agreed upon prior to Thursday night’s game against the Buccaneers. Ertz, a nine-year veteran, said he’s been bothered by friends who have suggested that the California native is “going back home” because the Cardinals play on the West Coast.

“This is home,” a tearful Ertz said in his press conference. “Philly is home. That was tough. I love this place. I’ve said it all along.”

The move frees up the remainder of Ertz’s $8.5 million salary – unless the Eagles are footing some of the bill – but more importantly allows fourth-year tight end Dallas Goedert to assume a larger role in the team’s offense. Goedert, who is currently on the Reserve/Covid-19 list that sidelined him Thursday night, has the team’s third-most receiving yards with 216 and averages more than 14 yards per catch despite splitting reps with Ertz.

Goedert, a  2018 second-round pick, and the Eagles have not reached an agreement on an extension despite several discussions. Moving Ertz theoretically makes these conversations easier, as Goedert will be the team’s No. 1 option at his position.  Roseman said the trade presents an opportunity for the team to evaluate Goedert based on the contract ahead.

“There’s gonna be no discount for Dallas Goedert,” Roseman said.”We know that.”

Gowan, a sixth-round pick from Central Florida, has good size at 6-foot-2 and 185 pounds. Defensive coordinators who play Cover 2 schemes, like Jonathan Gannon has in his first year with Eagles, typically look for corners with size. Gowan hasn’t played in a game yet this year for the Cardinals.

Because he played Thursday night, Ertz will be unavailable to play for the undefeated Cardinals on Sunday against the Browns.

The compensation for Ertz is fairly similar to offers the team received in the offseason, when Ertz had requested to be traded following last year’s 4-11-1 season and some acrimony between Ertz and Roseman caused by the veteran’s contract status.

In August, after Ertz was still on the 53-man roster after the final roster cutdown, Ertz said he and Roseman were on good terms and understood the team’s decision to stand firm on Ertz’s value.

Ertz said #Eagles (Howie Roseman) stood firm on what they perceived to be fair trade value, and “ultimately I can’t fault them for that.”

Also unclear is why the Eagles played Ertz and risked an injury when a trade had already been consummated, and if Geodert’s absence factored into the decision.

When asked Friday why Roseman didn’t trade him earlier, Ertz said he’s not the person “pulling the trigger” but said he didn’t have an issue with playing the first five games for the Eagles, including a final home game before left. He caught a touchdown on the team’s first offensive possession.

“I spiked the ball so hard I think it disappeared,” he said. “It was awesome to do that. I’m gonna be the biggest fan from afar. Obviously, I’m always gonna be cheering these guys.”

Ertz, a 2013 second-round pick out of Stanford, leaves as one of the most decorated pass catchers in Eagles history, with 579 receptions for 6,267 yards and 38 receiving touchdowns. His 11-yard touchdown catch from Nick Foles in the Super Bowl stood as the game-winner. Only wide receiver Harold Carmichael has more receptions in franchise history. His yards and touchdowns catches are ranked top-seven in franchise history.  In 2018, Ertz set a team and league record for receptions by a tight end with 116.

“Zach is an Eagle for life,” Roseman said. “Zach is family. That will never change. Just very appreciative of him and his contributions.”

Ertz said his Ertz Family Foundation charity will proceed with its House of Hope project and its mission to provide food, shelter and resources to inner-city children in the Hunting Park section of Philadelphia, an area stricken by poverty, drugs and gun violence.

For someone who once questioned if he could flourish in Philadelphia during a snowstorm game against the Lions as a rookie, Ertz said he looks forward to returning here, perhaps to someday be inducted into the team’s Ring of Honor.

Said Ertz: “It’ll be an honor to one day have that opportunity.”