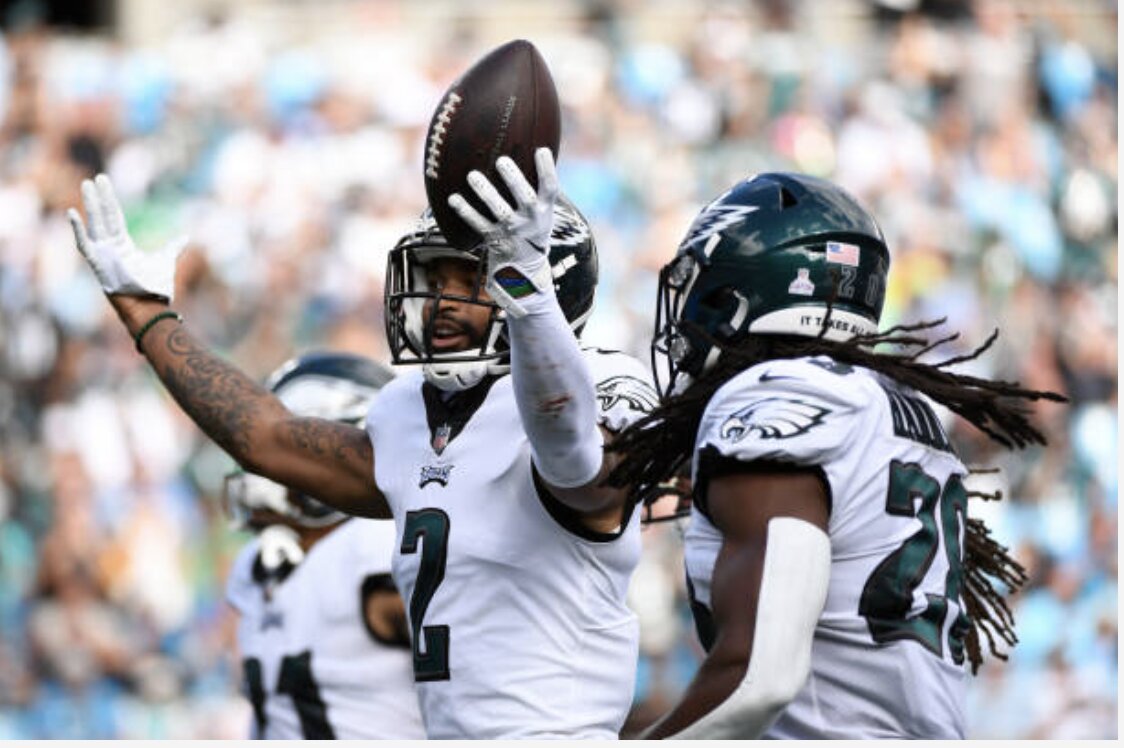 When offense is struggling, and defense can’t win by itself, there’s always special teams.

Eagles linebacker T.J. Edwards helped turn the table for the Eagles when he blocked a punt in the fourth quarter that Davion Taylor recovered deep in Carolina Panthers territory. The Eagles were trailing by five and hadn’t generated much offensively for most of the game but found new life as the clock wound down.

Eagles quarterback Jalen Hurts needed just four plays to put the ball in the end zone – a 16-yard pass to Dallas Goedert that set up a 6-yard touchdown run by Hurts on read option. Hurts then found Devonta Smith on the back line of the end zone for the two-point conversion that delivered a 21-18 lead, which ended up as the final score after Steven Nelson picked off Sam Darnold on the Panthers’ last drive.

The thriller in Charlotte at Bank of America Stadium stopped the Eagles’ three-game losing streak and prevented a downward spiral with the defending Super Bowl champion Tampa Bay Buccaneers up next on a short turnaround. The Bucs (3-1), fresh off a 45-17 win over Miami, come to the Linc in four days for for Thursday Night Football.

There were plenty of ugly moments from the game, from both sides, but the Eagles blended the right complement of offense, defense and special teams over the final 15 minutes to earn their first victory since the season opener, and they were resilient more than anything. They never led until Hurts’ rushing touchdown and were hurt again by penalties, turnovers, a dormant running game and some difficulties in pass protection.

Not all their problems were solved, but they earned a tough victory on the road with an extremely difficult matchup ahead.

1. It’s amazing how different the complexion of a game is for the Eagles when they face a team with a substandard offensive line. It caters well to Jonathan Gannon’s reluctance to pressure with more than four. The Eagles were improved against the run, but even more so they generated pressure in the passing game. Josh Sweat, Javon Hargrave and Fletcher Cox – yes, Fletcher Cox – each had sacks. There were a few tackles for a loss, too. The Panthers led 15-3 going into the break but put together just one drive in the second half of more than five plays and more than 32 yards. This is why the Eagles could hang in there and find a way to win.

2. That pressure didn’t just create itself. Finally, the Eagles played games up front, something they haven’t done in weeks. Their twisting, stunting and picking with the front four capitalized on a Panthers offensive line that didn’t have its starting left tackle and just isn’t very good in general. Their best lineman, Taylor Moton, is just OK. He moved from right tackle to left. The line movement took advantage of the Eagles’ athleticism up front. We need to see this against teams that also have good offensive lines, not just when the defense needs a pick-me-up.

3. The reason they won, of course, is because of turnovers. They picked off Sam Darnold three times, none more important than Nelson’s game-clincher, and the blocked punt that put them deep in Carolina territory. That’s not technically a turnover, but you get the picture. Flipping the field in tight games like these, especially on the road, is of utmost importance. Ten of the Eagles’ 21 points came off an interception and blocked punt. The Eagles don’t generate many turnovers, and maybe it’s just Sam Darnold being Sam Darold but the Eagles did generate plenty of pressure, so they should get credit for forcing the issue.

4. The flow of this game supported Gannon’s theory that red-zone defense and turnover creation are more important than run defense, and that teams generally struggle to march downfield on long drives without hurting themselves with a penalty, turnover or both. The Panthers lacked answers on third down (5 for 15), and Darnold and was sacked three times and hit eight times. The Eagles also recorded six tackles for a loss.  Carolina ran the ball effectively but didn’t get the chunk plays that Dallas and Kansas City thrived on because, well, Carolina isn’t as good as Dallas and Kansas City. So it appears the Eagles’ bend-don’t-break philosophy will work against OK teams and buckle against the elite ones, which is about right given their roster construct.

5. The lack of offensive identity for Nick Sirianni’s offense is glaring. Sure they pulled out the game and scored when they needed to, and sure, Carolina’s defense is pretty good, but there’s just no rhythm to the Eagles’ offense. The run game is sporadic, at best. They need to figure this out quickly. It seems Sirianni is so fixated on creating schemed-up plays for Hurts than he doesn’t let Hurts just be a quarterback. At some point, they need to add a physical element to what they do, and that’s got to come with more runs.

6. Perfect example of Point 4. Third quarter, ball comes back to the Eagles after a Darnold interception, and the offense is staring at 2nd-and-two after an 8-yard Dallas Goedert catch. Sure, 2nd-and-two is a great play-action down. It’s also a good down to run the ball, especially when your offense is trying to get stable. Instead, another pass in called, and Hurts is sacked by Haason Reddick. Next snap? Anther sack. Then comes a punt. That can’t happen when you pick up eight yards on first down.

7. The physical element also needs to come from Goedert, who caught just two passes for 28 yards on just three targets. This guy’s too good to just be an ancillary part of the offense. But so far, he’s a spare part who occasionally gets the ball instead of routinely. Goedert’s season high for targets and catches is five – last Sunday against the Chiefs. How long will the Eagles reduce his targets while the offense toils?

8. He finished strong, but decision-making wasn’t Hurts’ strong point. It really stood out when he heaved a deep pass out of bounds right before the half despite pointing his receivers to go deep after a Panthers defensive back had jumped offside. Why throw the ball out of bounds? You have a free play, take a shot, and make sure it’s in the field of play. On the next snap, Hurts quickly delivered to DeVonta Smith on an out route instead of targeting a wide-open Quez Watkins, who was unguarded as he streaked downfield. Hurts tends to rush his decisions and throws — either his delivery or when leaving the pocket.

9. That said, it’s worth noting that Hurts, who has left the pocket too early at times this year, took a hit while waiting and then connecting with Watkins on a 53-yarder later in the game. Darnold, meanwhile, fled the pocket (or at least tried to) at any sign of pressure, even on plays where the Eagles didn’t completely collapse the pocket. Hurts made as many, if not more, big plays from the pocket than Darnold did.

10. Players, first and foremost, are responsible for their errors. But when certain players or play calls yield the same negative result, you have to question coaching. Greg Ward joined the long list of Eagles wide receivers to negate a touchdown when he was flagged for an illegal pick on Smith’s first-quarter touchdown. It’s the second straight week this happened for the Eagles, and this was worse than J.J. Arcega-Whiteside’s against the Chiefs. Ward didn’t need to make any contact for Smith to catch that pass. The Eagles have also had two touchdowns wiped away this year by receivers stepping out of bounds before catching the ball. Wide receivers coach Aaron Moorehead can’t expect to keep his job if his receivers keep repeating the same correctable mistakes week after week.