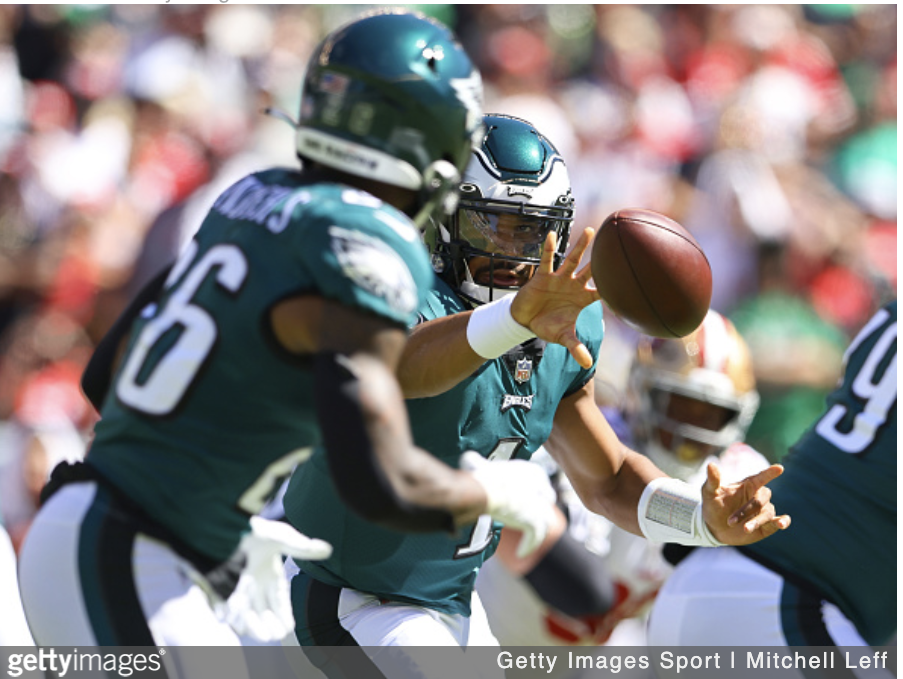 Hours before the proverbial bell sounded a Round 2 matchup against the San Francisco 49ers for the Eagles, there was a distinctive buzz circulating around Lincoln Financial Field.

Predictably, the early stages of the Eagles’ 17-11 loss adopted the feel of a boxing match, as both teams weathered a closely contested defensive slugfest while taking what each respective defense would allow.

However, while a stout, swarming Eagles defense put quarterback Jimmy Garoppolo under duress in his drop backs and stymied a lethal rushing attack before seemingly succumbing to exhaustion, the innovative offense that had brimmed with optionality from one week ago couldn’t seem to get out of its own way.

“We had a lot of opportunities out there that we didn’t capitalize on,” Hurts said after the game. “I think that’s plain and simple right there. We have to be consistent in our execution. I have to be consistent in my execution and operation as a field general. It’s something to learn from today – a lot to learn from. They were things we could control, so that’s what hurts the most. We give credit to a good team and a good defense out there. Those wounds out there were self-inflicted.”

Last week, the Eagles faced little resistance executing their game plan against the Falcons. Sirianni pushed all the right buttons in a balanced, tactical approach, allowing Hurts to command the huddle, delivering the football with quick anticipation, timing, and accuracy while also showcasing his signature poise and confidence.

This time, Sirianni, a first-year play caller, struggled before the home crowd from a play selection standpoint – most notably on a bumbling rendition of the “Philly Special” in a critical 4th-and-goal situation in the first half.

Hurts, who accepted his share of blame for the offensive letdown, responded with his typical poise to adverse circumstances in the fourth. When it appeared that the 49ers were content to play soft coverage and limit Eagles receivers from beating them over the top, the dual-threat signal caller took matters into his own hands and utilized his running ability to move the offense on a 75-yard drive that ended with a touchdown and 2-point conversion to put the Eagles within striking distance.

Sure, Siranni’s curious play-calling in key spots will garner most of the storylines this week. Some of the offense’s shortcomings can also be attributed to a chest injury by right guard Brandon Brooks, who was replaced by rookie Landon Dickerson. But Hurts notably held the ball longer this week and missed some downfield opportunities – an underthrown seam route on the opening drive to DeVonta Smith being most glaring.

“I wanted to give those guys an opportunity,” Hurts said of his deep ball emphasis this week. “On some of those, I failed to hit them. It’s something we learn from and move on.”

Still, there were positives amid the overall outcome. Hurts connected with wide receiver Quez Watkins on a perfectly placed 91-yard strike down the right sideline, again protected the football, and made calculated decisions.

He also demonstrated his ability to shift momentum with innate intangibles. Sirianni refused to alter his aggressive nature despite the game script, which is an encouraging sign for a young coach in those circumstances.

The Eagles have an opportunity to rebound from the first hardship of Sirianni’s short tenure this week before going on the road to take on the Cowboys for Round 3, in prime time.

“We have a 24-hour rule after wins,” Hurts insisted, “and we do the same with these and learn from them.”