What Could Have Been? 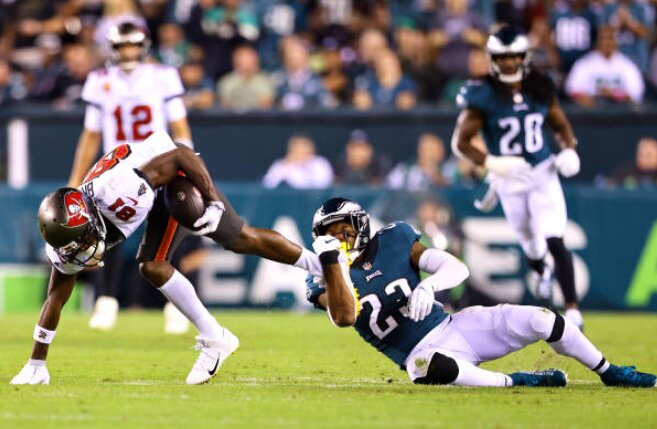 PHILADELPHIA – To the delight of the riled-up Lincoln Financial Field crowd, the undermanned and underdog Eagles on Thursday night had countered a meticulous opening touchdown possession from the Tampa Bay Buccaneers with a 75-yard scoring drive of its own, culminating in a 5-yard touchdown pass from Jalen Hurts to tight end Zach Ertz that evened the score.

What was perceived as a lopsided prime time matchup between teams on opposite ends of the NFL spectrum had surprisingly unfolded like a boxing match, with each team trading haymakers through the opening quarter.

After the Ertz touchdown, the Bucs answered with a nine-play, 75-yard drive that concluded with a 23-yard touchdown pass from Tom Brady to Antonio Brown.

Brady was surgical in the first quarter, completing 11 of his 12 pass attempts for 121 yards and two touchdowns. Tampa Bay’s balanced attack had also featured a steady dose of running back Leonard Fournette, who bulldozed through the Eagles’ front seven with little resistance en route to 4.2 yards per carry while adding 22 yards on three receptions.

But the Eagles defense held on the Bucs’ first possession of the second quarter, forcing a punt, only to watch a hapless offense stall – a troubling trend that continued for much of the night.

If the Eagles stood any shot to keep pace with the defending Super Bowl champions, it was evident they’d need a takeaway or two for the upset.

It appeared they’d get one after linebacker Alex Singleton deflected a short pass over the middle intended for tight end Cameron Brate. The ball ended up in the hands of safety Marcus Epps for an interception, a major field flip that positioned the Eagles’ offense near midfield.

But after an extremely lengthy review, referees reversed the interception. Tampa instead flipped the field, with a 44-yard punt to the Philadelphia 11-yard line.

When a team has such little margin for error, moments like those become magnified in defeat.

“I thought I had my hands under the ball. I thought I had control of it,” Epps said after the game. “The [referee] saw it differently and overturned it. You just have to live with it.”

Until that point, the Eagles had hung tough. Who knows what would’ve happened if Epps’ pick had stood and if the Eagles had needed only half the field to hit pay dirt. Like the blocked punt  the week before, and like a fourth-down Bucs turnover later in the game, the Eagles seemed to move the ball better offensively when those opportunities were presented.

On the next possession after the Epps breakup, the Eagles once again struggled to foster momentum, as Bucs cornerback Jamel Dean intercepted Jalen Hurts on an erratic overthrow down the left sideline on the third play. Tampa Bay turned the change of possession into a five-minute, thirty-six second march that resulted in a 2-yard touchdown run from Fournette to put the Bucs up by two scores.

Even after safety Anthony Harris secured his first interception later in the quarter, a gift-wrapped heave by Brady, the turnover proved to be insubstantial, as the offense’s deficiencies continued.

The defense produced a turnover and forced two punts in the first half against the NFL’s most prolific offense, but the Eagles still trailed 21-7 going into the break.

“There were definitely some missed opportunities there in the pass game, but it felt like there wasn’t enough missed opportunities,” head coach Nick Sirianni said. “It was more, ‘Hey, we got to do a better job getting these guys in position to make plays against defenses.’”

The near-Epps interception served as a microcosm of a young season rife with missed opportunities. It gave a floundering Eagles team some new life and shifted momentum, but only momentarily.