As the lone veteran in the Eagles safety room, Anthony Harris represents a stabilizing presence despite the unit’s youth and inexperience.

The safety duo of Harris and Rodney McLeod that patrolled the secondary together last season briefly tested the free-agent waters this offseason, but it was the 30-year-old Harris who was retained.

Aside from the Harris re-signing, the Eagles have neglected the opportunity to reconstruct its perpetually scrutinized safety position during the offseason.

Marcus Epps, K’Von Wallace, Andre Chachere, and Jared Mayden round out the position beyond Harris, which leaves the veteran Harris in the familiar role of mentor.

“From my experience and my journey of being an undrafted guy to sitting here where I’m at now, I’m just trying to help guys grow, and help guys continue to develop on and off the field, and try and be a mentor when I can and paying it back,” Harris said on Wednesday. 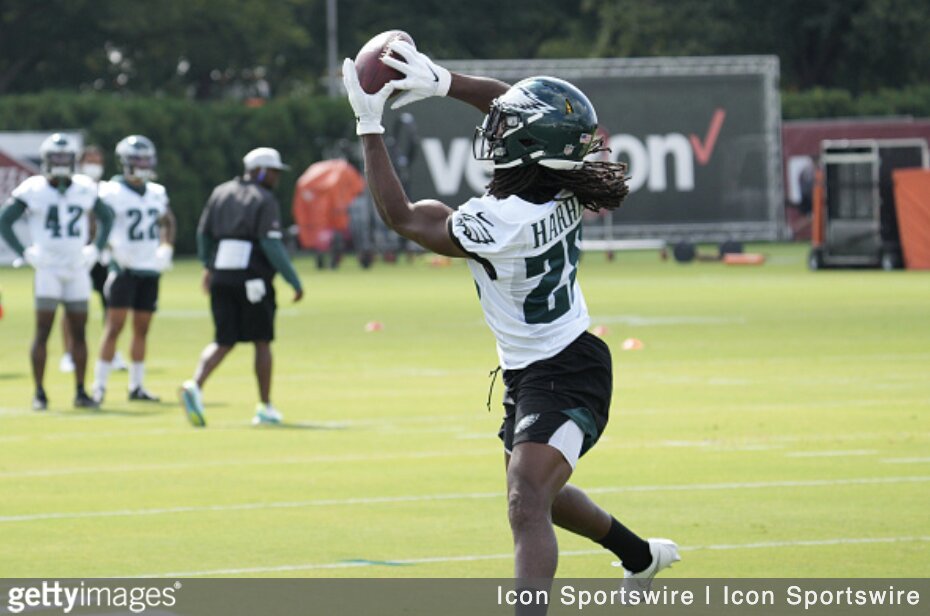 Veteran S Anthony Harris will be the eye of skeptics of the Eagles’ defensive backfield.

“That’s kind of been my experience. I’ve had veteran players – some at my same position, some in other rooms – preaching each day of the mindset of competing and what that looks like. And not being satisfied with just doing your job, but doing your job and executing and finishing. Whether that’s with a pass breakup and just always looking to get better and take that next step from a pass deflection to now an interception.

“That’s something I share every day with those guys, is just competing. And even guys who may be behind me and feeling like I have a solidified spot, saying, ‘Come get me.’ And me just putting that pressure on myself to never be satisfied, to always continue to push the bar. Not only for myself, but for everybody around me.”

Like many others adjusting to coordinator Jonathan Gannon’s defense in Gannon’s first season in Philadelphia, Harris had an uneven campaign. The player who only two years earlier was the NFL’s co-leader in interceptions appeared hesitant, slow-footed, and managed only one takeaway and three passes defended despite playing 89 percent of the team’s snaps.

Perhaps the Eagles’ thinking at safety this offseason was to bolster their front seven to alleviate backend pressure and allow Gannon to deploy his secondary players without constraints.

Nevertheless, they’ll have to decide who will align alongside Harris when the season begins.

As of now, Epps, the fourth-year veteran, appears to be the player most qualified to fill the void left by McLeod’s departure. Last season, the 25-year-old generated 62 tackles, five passes defended and an interception, playing just shy of 50 percent of the team’s snaps.

Whether it came from Gannon or his predecessor, Jim Schwartz, the message has been crystal clear that Epps would be able to capably carry out his assignments.

Though he lacks tantalizing athleticism and range, Epps has proven to be a tough, hard-working, sharp-minded safety who adapts quickly, drawing parallels to the player Harris remembered from their brief time together in Minnesota in 2019.

“I spent some time with him in Minnesota, and from then to now, he’s remained the same player,” Harris said. “Young, has a lot of ability, always focused, always paying attention to what the coaches are saying. Regardless of how much he’s playing, he’s always up on the game plan, he’s always knowing the assignments.

“And then just watching him work, being very detailed in what he’s doing, and just being hungry for the opportunity. I think you take a look at all those things, and you just say that this is a guy who has a chance, because he’s really focused on the opportunity. And if one comes, he’s preparing himself to be ready for it.”

While the barren depth chart could certainly undergo a facelift between now and training camp,  it appears for now that Epps’ opportunity has arrived.

Some might find it hard to appreciate a largely unproven player who has yet to exceed the 48-percent threshold for defensive snaps in his three seasons, but the Eagles have demonstrated in their actions their unwavering commitment to their young safety.

“I mean, some people wanna look at sample size,” Harris said. “I think you just look at the player, the ability, and what he’s done with the opportunity that he’s given.

“Nobody can predict the future, but he’s doing all the right things to give himself the best chance to be just as successful as anybody else. So I think you take a look at that, and you continue to give players more opportunities to continue to do and succeed with what they’re given, as well.”

Eagles head coach Nick Sirianni didn’t mince words at his end-of season press conference when discussing second-year receiver Quez Watkins. “Quez has big-play ability in him,” Sirianni said in January. “I think out of the No. 2 wideouts I’ve been around in the NFL, he can be one of the best No. 2’s that I’ve…

Show Him The Money?

ITB: Birds Have Chance To Land CB Bradberry, But ...