The Eagles (13-2) return to Lincoln Financial Field for the first time in three weeks to host the New Orleans Saints (6-9) on New Year’s Day for a 1 p.m. kickoff.

In the wake of their Christmas Eve loss in Arlington, Texas, to the NFC East-rival Dallas Cowboys – in which they uncharacteristically committed a season-high four turnovers – the Eagles will have another opportunity to clinch the NFC East and secure the No. 1 seed for the 2023 playoffs.

In their way, however, are the Saints, who despite needing to win out – and some assistance – to seal a playoff berth are still mathematically in the running for the No. 7 seed.

Here are four X-factors primed to impact the New Year’s Day tilt at the Linc: 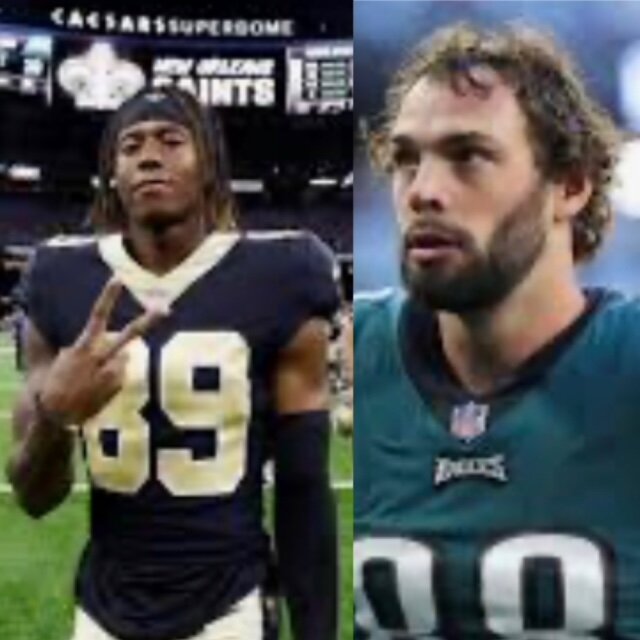 TE Dallas Goedert: The fifth-year tight end returned from a five-week slumber on Christmas Eve, leading all Eagles pass-catchers in snap count percentage (94%) against Dallas and snaring three catches for 67 yards on three targets. Regardless of who’s starting at quarterback for the Eagles, Sunday’s matchup plays decisively into Goedert’s favor. With starting safety Marcus Maye (shoulder) ruled out, and with reserve safety Justin Evans (shoulder) limited throughout the week, I expect the Eagles to pepper their dynamic tight end with targets and exploit the middle of the field on intermediary routes. Goedert, perhaps the team’s most quarterback-friendly weapon, should have an opportunity to reach 100 receiving yards for the second time this season.

LB T.J. Edwards: When the Eagles and Saints clashed last season in Week 11, Edwards showcased his complete arsenal, posting double-digit tackles, an interception, two passes defended, and a fumble recovery. With the Saints’ offense running through Alvin Kamara – the running back averages 92 scrimmage yards per game – Edwards’ downhill aggression around the line of scrimmage will be vital in hindering New Orleans’ approach and forcing the Saints to become one-dimensional. Edwards should also find himself busy in coverage, where I anticipate the Saints actively scheming to isolate a linebacker with limited range in space against Kamara or tight end Juwan Johnson, who leads the team in touchdown receptions (7). Johnson will also be a focal point in the red zone.

WR/RET Rashid Shaheed: An undrafted rookie out of Weber State – where he was briefly teammates with Eagles offensive lineman Sua Opeta – Shaheed is a fleet-footed pass-catcher who has logged starts in each of the last three games. Over that span, Shaheed secured 11 receptions for 211 yards and a touchdown on 13 targets. With top receiver Chris Olave sidelined last week, Shaheed seized his opportunity in the team’s win over the Browns, leading the Saints in receptions (4), yards (41), and targets (5). And while his limited resume includes just 19 catches and a handful of targets, Shaheed is quickly becoming the Saints’ second-in-command opposite Olave and has managed to reel in a pair of touchdowns – including a long of 68 – while boasting a hefty 19.7 yards per reception. With Olave (hamstring) presumably on track to play this week, Shaheed returns to a complementary role and will face an undermanned secondary. Saints quarterback Andy Dalton averages a paltry 208 passing yards per game and a ferocious Eagles pass rush likely renders the Saints’ passing game obsolete, but should communication breakdowns persist for another week in the Eagles’ secondary, Shaheed can make them pay. Shaheed was also a four-time All-American kick returner and 2021 first-team Big Sky Conference KR/PR, so Michael Clay’s special teams unit can’t afford a lapse in discipline.

DE Cameron Jordan: While the Eagles have yet to divulge who will be filling the the Pro Bowl cleats of stalwart right tackle Lane Johnson, one could surmise that it will likely be third-year pro Jack Driscoll. Driscoll has logged plenty of miles throughout his first three seasons – 1,038 snaps, to be exact – with 14 starts, but he or whoever replaces Johnson will face a unique challenge from Jordan. The 33-year-old edge rusher – whose career 112.5 sacks qualify for second-most among active NFL players – is second on the Saints in sacks (5.5), but first in quarterback hits (11) and tackles for loss (10). Jordan’s power at the point of attack, relentless motor, and signature swim move could be a tall order for Driscoll, especially with Minshew potentially at the controls in place of an ailing Hurts for another week.