Man With A Plan?

Nine weeks into the season, Jonathan Gannon has little choice than to leave no stone unturned in his search for answers.

On Sunday, the beleaguered first-time defensive coordinator insufferably watched his modified defense decoded by Chargers quarterback Justin Herbert in a 27-24 loss, with Herbert on his way to becoming the fifth quarterback to yield an 80-plus completion percentage against his unit this season.

But lost amid the defensive collapse was the fact that Gannon’s once-faulty defense that had allowed opposing ball-carriers to slice through like a hot knife through butter had seemingly been rectified. Chargers running backs combined for a 3.3 yards-per-carry average, an improvement that constituted as a mere footnote in defeat.

In addition to his run defense improvement, Gannon diversified his coverages, and showed more aggression than usual by dialing up his highest blitz percentage of the season at just under 30 percent of Herbert’s drop-backs. 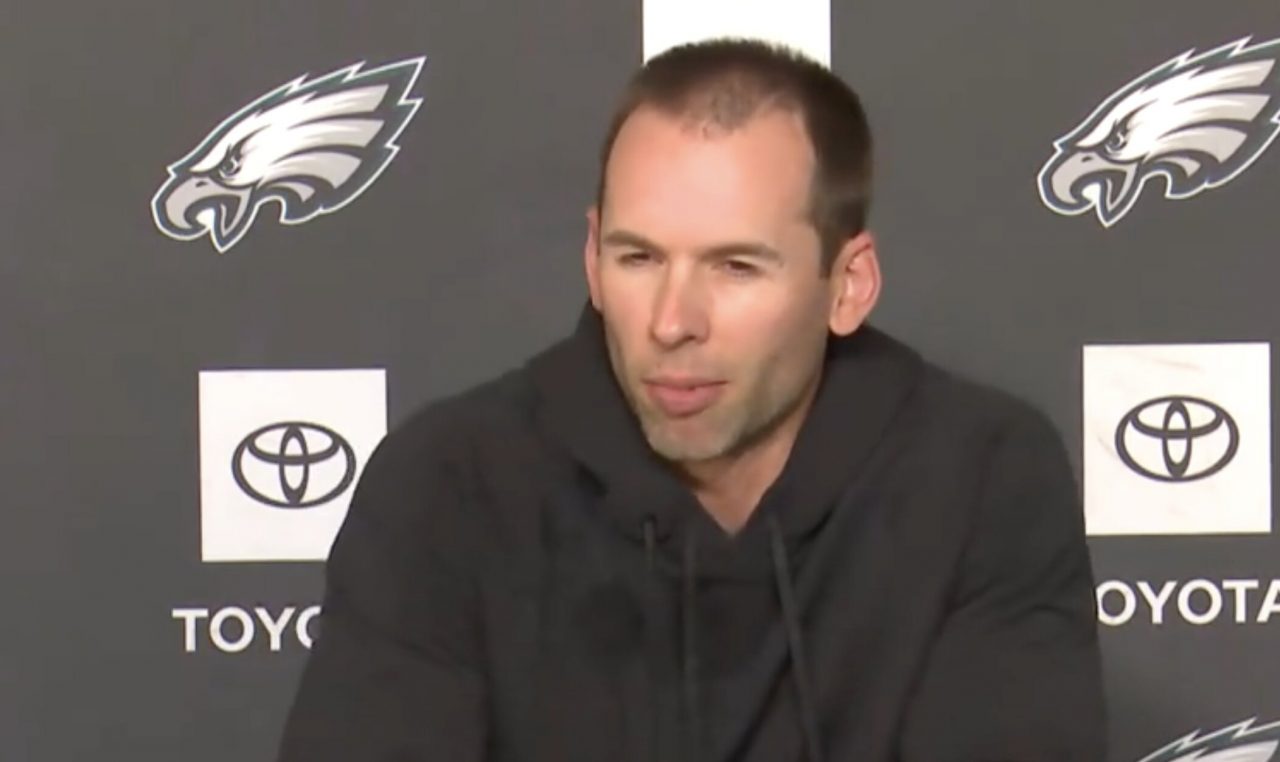 Still, they weren’t enough to prevent the Chargers’ quarterback from completing 32-of-38 pass attempts for 356 yards and two touchdowns.

The high-priced defensive line, lauded as one of the league’s elite just a few months ago, failed to register a single sack or even hit on Herbert, who negated the Eagles’ pass rush with quick decision-making.

So, how can Gannon remedy the passing game woes?

He was asked if more pre-snap or post-snap disguise could help.

Gannon reflected on a time when he was an assistant on Mike Zimmer’s staff in Minnesota, when a player felt that post-snap movement had restricted the player’s overall impact.

“A team that has a safety on the line of scrimmage, well he plays in a deep post after the ball is snapped,” Gannon said, “And I always thought to myself – I got this from the players, they would say, ‘JG, that’s all cool and everything, but I have no shot to make any play in the middle of the field because I’m coming from the line of scrimmage. So, the disguise is great, but you’re really hamstringing me to be able to make plays.’”

Gannon, in his first season with this personnel, discussed the difficulties of using deception and guile while also asking his players to carry out their main responsibilities.

“So, there’s a blend of how much you can tilt the coverage and disguise and make it look really different on the quarterback pre- and post-snap,” he added, “with also getting your guys in position to get what they need to get done within the call.

“And like everything, there’s a blend to that. When can we be really aggressive with how we’re aligning people, and when we really can’t?

“So, that’s always an ever-evolving thing. And, with situationally, where can you take those chances, so to speak, to align people in certain ways.”

Perhaps the most obvious solution would be an increased responsibility on the shoulders of his two veteran cornerbacks, Darius Slay and Steve Nelson. He can bring them up to challenge receivers at the line of scrimmage at a higher frequency.

While this tweak would counteract Gannon’s passive, read-and-react philosophy and increases the odds of surrendering explosive plays, it also combats the timing and rhythm of the opposing passing game.

But it’s also fair to question whether Gannon has the necessary personnel to competently execute his schemes.

Sure, his first-team secondary — comprised of veterans Slay, Nelson, Anthony Harris, and Rodney McLeod — have played a combined 438 games, including 364 starts. However, all with the exception of Slay offer varying degrees of limitations.

Gannon’s linebacker room, comprised of complementary players and special teams aces, has been a perpetual sore spot. It wasn’t until the insertion of T.J. Edwards and Davion Taylor that the play improved.

Still, while Edwards provides a tenacious mentality and physical element to the second level, and while Taylor adds speed and athleticism, teams can pepper their respective sides of the field with targets, attack the short-to-intermediate areas, and force them to play in space.

Taylor, in particular, is still learning on the job.

More often than not, the limitations on the second and third levels places implausible pressure on the front four to routinely win their matchups.

While Gannon is hardly absolved from his unit’s ineptitude – it’s his job to maximize personnel – it’s a tall ask for any first-year coordinator to devise an elaborate plan of attack with evident personnel shortcomings.

In the meantime, Gannon said he would strive for more aggression and implement new wrinkles where he sees fit, without running the risk of overburdening his personnel.

“Yeah, by situation and formation, you can change some things up,” Gannon said. “But I think, ultimately, when we set up the plan, we say, ‘Hey, these however-many calls are very aggressive, we’re going to call them and run them. And it is what it is.’

“Other times, where if you call those calls and they’re in certain formations or certain situations, you’re – it’s not good for the defense, typically.

So, there are a couple, actually, that I would like to have back in that [Chargers] game, where we were ultra-aggressive to not great formations and plays, that we caught pressures into. And it was like, on the headset, [I would say,] ‘That’s not what I wanted that for,’ you know?

“But with saying that, there’s a blend of that because you can’t put too much mental stress on the players of always checking out of something or checking into something.

“So, that’s always a blend of how we set it up, where’s the mental stress, where’s the physical stress within the game?”