Inside The Birds podcast hosts Geoff Mosher and Adam Caplan joined with InsideTheBirds.com’s Andrew DiCecco for the third annual Inside The Birds Mock Draft, complete with all 32 selections and background on the prospects. 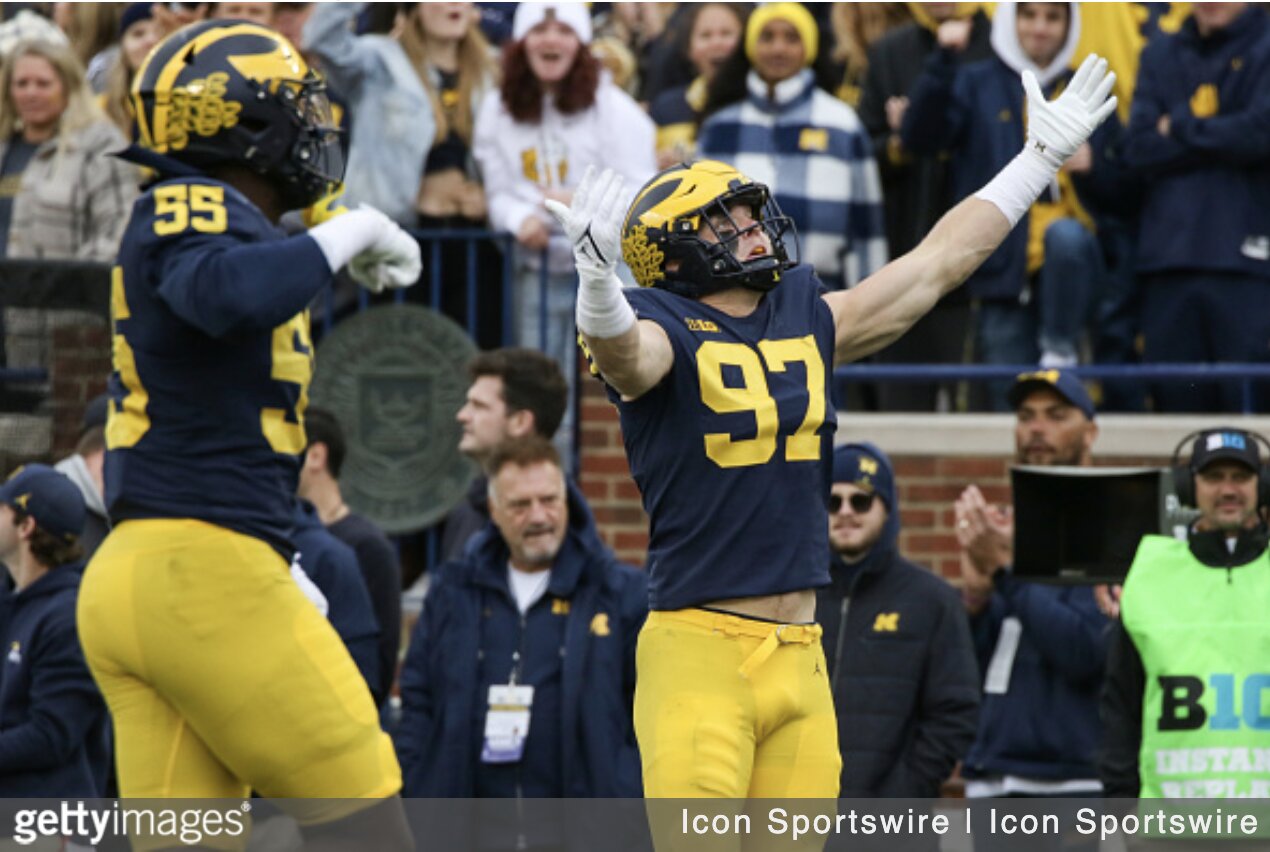 Aiden Hutchinson could be the top pick in the 2022 NFL Draft.

Adam Caplan: “They need pass rushers, there’s no question about that. The guy is camera-ready.”

Andrew DiCecco: “They have a ton of needs. You could make a case for Sauce Gardner. But they really need to add some youth there on the edge.”

Geoff Mosher: “He makes sense for what they want to do defensively, and what they are now [Tampa 2].”

Caplan: “This guy’s an absolute stud. As one GM told me this previous week, ‘He’s the best player in this draft,’ and I believe that.”

DiCecco: “Positional versatility, plays with a mean streak. In time he can kick out at right tackle.”

Mosher: “It’s a layup. If Evan Neal is there he’s gonna be a Carolina Panther. He’s gonna be their left tackle. And they’re going to be pretty good team if they can get just decent play out of Sam Darnold.”

Caplan: “This is where the board starts to drop a little bit. Comes down to [Derek] Stingley vs. Hamilton, and you don’t have the injury history with Hamilton.”

DiCecco: “They really can’t lime up right now [with receivers]. If  you see Jameson Williams out there, you run to the podium, you make him the pick.”

Mosher: “This is a good opportunity for whenever everybody expects the Seahawks to rebuild this year to go ahead and get that quarterback and build up around him.”

DiCecco: “You talk about adding a playmaker to the secondary, that would make the most sense to me.”

Mosher: “For who the Vikings are, for what they need … I’m taking the guy who’s an analytics dream.”

DiCecco: “They have a really old line with Derek Wolfe and they have Calais Campbell there as well. They really need to add some youth.”

Mosher: “I would have to think he’s the best player available on most teams’ boards. I know some teams like him in the top 10.”

Caplan: “If Kenny Pickett is there, you take him. Pickett’s gotta be that guy. They’ve needed a quarterback for the future.”

DiCecco: “If I’m the Chargers, that would make the most sense.”

Mosher: “When you take Garrett Wilson at 15 … it still leaves Jermaine Johnson available.”

Caplan: “Receiver is another big need for them. They need explosiveness.”

DiCecco: “A guy like Trent McDuffie would sort of fit their prototype in what hey look for — young, physical corner with good football IQ.”

Mosher: “This is a team that’s not afraid to take a linebacker in the first round. It’s almost a steal if he’s as good as they say he is.”

Caplan: “To me it’s gotta be a receiver here. Best available at the position.”

Mosher: “I think they need offensive line help more than anything.”

Caplan: “They lost two receivers. I’m taking the best available player on the board, and that’s Olave.”

Mosher: “He’s a really good player who’s starting to slip into the bottom end of the first round.”

Caplan: “They need a guard. They’re super deep at receiver.”

Mosher: “When you have two picks like this in the first round, you can make a luxury pick and take a risk. We know Andy Reid loves explosive edge rushers.”

Caplan: “There’s no Tyreek Hill. This guy … without this [past] ACL injury is one of the best players in the draft.”

DiCecco: “Eli Apple isn’t going to get it done. He shouldn’t be a starter. They need to shore up that back end.”

Mosher: “The fifth-year is a huge advantage for teams. When you know you’ve got a year to develop a guy … the feedback I get is that of all the [QBs] remaining he may have the highest upside.”