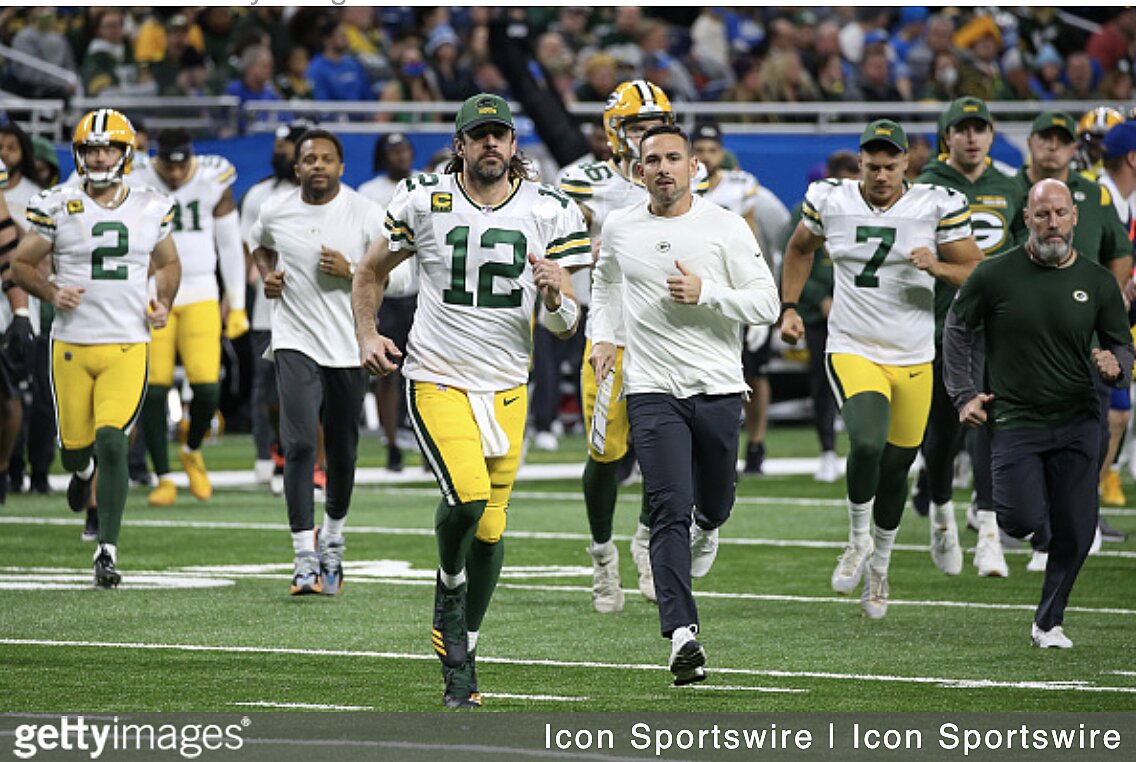 Packers QB Aaron Rodgers is chasing Super Bowl title No. 2 for him.

2) Tennessee Titans (12-5; ranked last week: #5): Give them credit for surviving and thriving despite the loss of RB Derrick Henry. And now he’ll be back after their bye. And don’t sleep on their defense.

3) Kansas City Chiefs (12-5; ranked last week: #3): It’s a bit concerning what has happened on defense over the last two games, but they’ll get it together against the Steeler offense, which they shut down recently in Kansas City.

4) Tampa Bay Buccaneers (13-4; ranked last week: #7): Despite some turmoil due to the Antonio Brown situation, and some injury issues in their secondary, the Buccaneers still finished with an outstanding record and they’re primed to go on another playoff run.

5) Dallas Cowboys (12-5; ranked last week: #4): They’re capable of going on a strong playoff run because they have one of the best rosters of any team playing in mid-January.

6) Los Angeles Rams (12-5; ranked last week: #2): They can’t be pleased after blowing a huge lead to their division-rival 49ers. And now they have injury issues on defense.

7) Buffalo Bills (11-6; ranked last week: #6): A great job by the coaches and players by closing with four straight wins after losing back-to-back games against the Patriots and Bucs.

8) New England Patriots (10-7; ranked last week: #9): Let’s see how rookie QB Mac Jones does not just in cold weather, but also against a good defense Saturday on the road. He played poorly in the last game at Buffalo.

9) Cincinnati Bengals (10-7; ranked last week: #11): I don’t trust this team, but they’re definitely very talented. They’re capable of beating any team, but they have not handled success well this season.

10) Arizona Cardinals (11-6; ranked last week: #8): It’s hard to trust this team from one week to another based on what has happened to them over the last month or so.

12) Las Vegas Raiders (10-7; ranked last week: #14): What a story they’ve been considering what’s happened around them. And they’re very capable of beating the Bengals this week.

13) Philadelphia Eagles (9-8; ranked last week: #12): No one expected them to make the playoffs in HC Nick Sirianni’s first season, but they did. And they’re 6-3 on the road, which is also surprising. They’ve improved greatly on defense in the second half the season, but they also didn’t face a tough schedule.

14) Pittsburgh Steelers (9-7-1; ranked last week: #18): They’ll have an early exit in the playoffs, but give them credit for even making it when you consider they have some major roster deficiencies.

15) Indianapolis Colts (9-8; ranked last week: #10): It’s hard to believe they collapsed over their final two games, but it happens and they’re shockingly out of the playoffs.

17) Miami Dolphins (9-8; ranked last week: #16): Give them credit for turning around their season after the 1-7 start, but playoff expectations weren’t met this season, which was part of the reason why HC Brian Flores didn’t keep his job.

18) Baltimore Ravens (8-9); ranked last week: #17): Like some of the teams in our bottom half, they dealt with too many injuries, which were too much to overcome.

20) Atlanta Falcons (7-10; ranked last week: #20): In a way, they were better than expected this season, which probably isn’t saying that much when you look at their record.

21) Cleveland Browns (8-9; ranked last week: #21): There’s no question that this was one of the most disappointing teams in the NFL this season, yet their roster was better than the one that made the playoffs the previous season.

23) Minnesota Vikings (8-9; ranked last week: #22): The expectations from the team were that they would be a playoff team this season and that their defense would be better than it had been in previous years. However, neither wound up happening and that’s a part of the reason why there was a coaching and GM change.

24) Washington Football Team (7-10; ranked last week: #24): HC Ron Rivera, who has personnel control, will have to address many areas (QB, WR, OL, secondary) for the WFT to make the playoffs next season. But it’s hard to get everything done in one off-season.

25) Chicago Bears (6-11; ranked last week: #25): The new coaching staff and GM will focus on the development of QB Justin Fields and the GM will need to focus on putting talent around Fields at WR, TE, OL.

26) Seattle Seahawks (7-10; ranked last week: #26): They closed the season well, but they need upgrades and depth on both sides of the ball (OL, CB, S, DL) in order for them to get back into the playoff race.

27) Carolina Panthers (5-12; ranked last week: #27): Another fast start to the season, but another bad drop-off from this team, which is why HC Matt Rhule will be on the hot seat heading into next season.

28) New York Jets (4-13; ranked last week: #28): GM Joe Douglas has a big job on his hands once again. He took over a mess and will need to use his stockpile of draft picks and salary cap space wisely.

29) New York Giants (4-13; ranked last week: #29): They need a GM who really understands team building and how to win in the NFL. Their roster needs a lot of work, but also needs better coaching.

30) Houston Texans (4-13; ranked last week: #30): GM Nick Caserio, like many GMs in the bottom half of our rankings, needs to rebuild his roster. It’s made up of way too many mid-to-lower-level free agents. He needs to rebuild the roster through the draft.

31) Detroit Lions (3-13-1; ranked last week: #31): While they have one of the NFL’s worst rosters, HC Dan Campbell got his team playing hard every week. However, it will take more than that for them to push for the playoffs. GM Brad Holmes has a lot of work ahead of him to be sure.

32) Jacksonville Jaguars (3-14; ranked last week: #32): They have one of the NFL’s worst rosters, but at least have their franchise QB plus a lot of salary cap space makes the job more attractive than first thought for head coaching candidates.