As fantasy managers vigorously scour waiver wires looking for suitable replacements or potential lottery tickets,  as they stress over lineup decisions or contemplate trade scenarios, I’ve compiled my list of pickups, plays, and fades to help those managers win their Week 3 matchups. 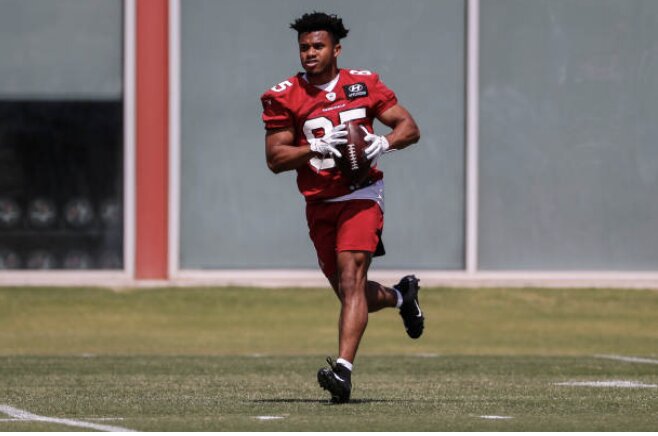 Raiders QB Derek Carr
He commands a surging Raiders offense that mustered 33 and 26 points, respectively, in impressive wins against the Baltimore Ravens and Pittsburgh Steelers. The eighth-year quarterback currently leads the NFL in passing yards (817) and is tied with Jared Goff for the most pass attempts (93) through two games. Carr had been dealing with an ankle injury earlier in the week, but head coach Jon Gruden deemed his quarterback “ready to go” ahead of a Week 3 matchup with the Dolphins.

If your quarterback is underperforming or if you’re one who streams quarterbacks, get Derek Carr if he’s available.

Cardinals WR Rondale Moore
Moore began the season buried on Arizona’s depth chart, comfortably behind DeAndre Hopkins, A.J. Green, and Christian Kirk, but the 2021 second-round pick has quickly become the team’s secondary option behind Hopkins. In the season-opener, Moore played in just 29 percent of the team’s offensive snaps. However, on Sunday, Moore accounted for 46 percent of the snaps – compiling seven receptions for 114 yards and a touchdown. The Purdue product has yielded 11 catches for 182 yards and a touchdown on 13 targets and his usage only appears to be trending up. Moore is a big play waiting to happen and draws the floundering Jaguars this week. If he’s out there, get him onto your roster and into your flex spot this week.

Giants WR Sterling Shepard
While the Giants’ offense should continue to be a volatile unit throughout the season, the one player who can provide stability to your lineup is veteran wide receiver Sterling Shepard. The team’s resident target monster, Shepard has yielded 16 catches for 207 yards and a touchdown on 19 targets. Many of his teammates remain touchdown dependent, but Shepard is virtually matchup-proof and has an innate chemistry with quarterback Daniel Jones. Shepard is decidedly more valuable in PPR formats but can also provide value as a flex option in standard formats as well. If he’s sitting on your waiver wire, act now if you have the roster space.

Steelers RB Najee Harris
Harris isn’t off to the fast start that many envisioned, largely due to inept offensive line play, but the rookie running back should figure prominently in this week’s AFC North clash against the Bengals. Through two games, Harris has just 26 carries for 83 yards, but has also been utilized in the receiving game, racking up six receptions for 47 yards and a touchdown. The volume will assuredly come for Harris, but his receiving role and lack of competition for carries gives him a weekly steady floor.

Bears WRs Allen Robinson, Darnell Mooney
I expected the Browns’ secondary to effectively eliminate a frivolous Texans aerial attack, yet the unit allowed quarterbacks Tyrod Taylor and Davis Mills to combine for 227 yards, two touchdowns and an interception in a game that was largely competitive most of the way. First-round pick Justin Fields will make his much anticipated NFL starting debut this week in place of an injured Andy Dalton, and his multi-faceted skill-set lends itself favorably to big games from Robinson and Mooney. Mooney, a quick-twitch, explosive vertical weapon, should benefit immensely.

Eagles WR DeVonta Smith
Smith, who has drawn a team-leading 15 targets through two games, will face a vulnerable Dallas secondary in prime time. The Eagles de facto No. 1 wide receiver will likely draw former Alabama teammate Trevon Diggs in coverage for much of the night, and the offense should be humming after a dismal Week 2 outing. I anticipate a stat line similar to Smith’s Week 1 output, when he tallied six receptions for 71 yards and a touchdown. Look for quarterback Jalen Hurts – another strong play — to get Smith involved early.

Jaguars RB James Robinson
The Jaguars’ current infrastructure doesn’t exactly lend itself to consistent, fantasy relevant skill players. Last season, Robinson emerged to lead the Jaguars backfield and register 1,070 yards and seven touchdowns on 240 carries. The offense ran through him. This year, however, the negative game script has forced the Jaguars to take to the air to compile passing yards. Robinson has just 16 carries for 72 yards to go along with six receptions. If you drafted Robinson, it was likely to serve as your RB2/RB3, but last year’s rookie sensation simply isn’t playable until the team establishes some semblance of offensive cohesion. Leave him on your bench this week if you have other options.

Steelers WR Diontae Johnson
Johnson is dealing with a knee injury and his status for this week is uncertain. Additionally, quarterback Ben Roethlisberger is nursing a pectoral injury, though he is expected to play. Both players were non-participants in Wednesday’s practice. Johnson, who has amassed 14 receptions for 141 yards and a touchdown on 22 targets, could be on a proverbial pitch count if activated.

Colts WR Michael Pittman
Pittman, the Colts’ unquestioned No. 1 receiver, totaled eight catches for 123 yards on 12 targets in Week 2, so it might seem rather peculiar to see him in this space. However, with second-year quarterback Jacob Eason in line to make his first NFL start in place of an injured Carson Wentz, expectations must be tempered. The Colts draw the ball-controlling Titans this week, so opportunities could be few and far between. I like Pittman’s prospects this season, but I’d wait to see what the target share and offense looks like with Eason at the helm before plugging Pittman into your lineup.

Bucs WR Antonio Brown
Brown erupted for 121 yards and a touchdown in the season opener, channeling the dominant AB of old and appearing destined for a career resurgence. While the latter could ultimately prove to be true, between Brown, Mike Evans, Chris Godwin, Rob Gronkowski, there are simply too many mouths to feed in this high-powered Bucs offense to feel comfortable deploying Brown as an every week starter. For perspective, Brown hauled in one reception for 17 yards on Sunday while Evans reeled in five catches for 75 yards and two touchdowns. Further complicating matters, Brown was placed on the Reserve/COVID list on Wednesday.