Inside The Birds: Struggle Real For Jalen Hurts

With Monday’s loss to Dallas in the rear-view mirror, it’s time for the tape review to see where things went wrong for the Eagles

On the latest Inside The Birds, Geoff Mosher and Adam Caplan discussed what the tape showed, along with exploring the injuries and transactions. 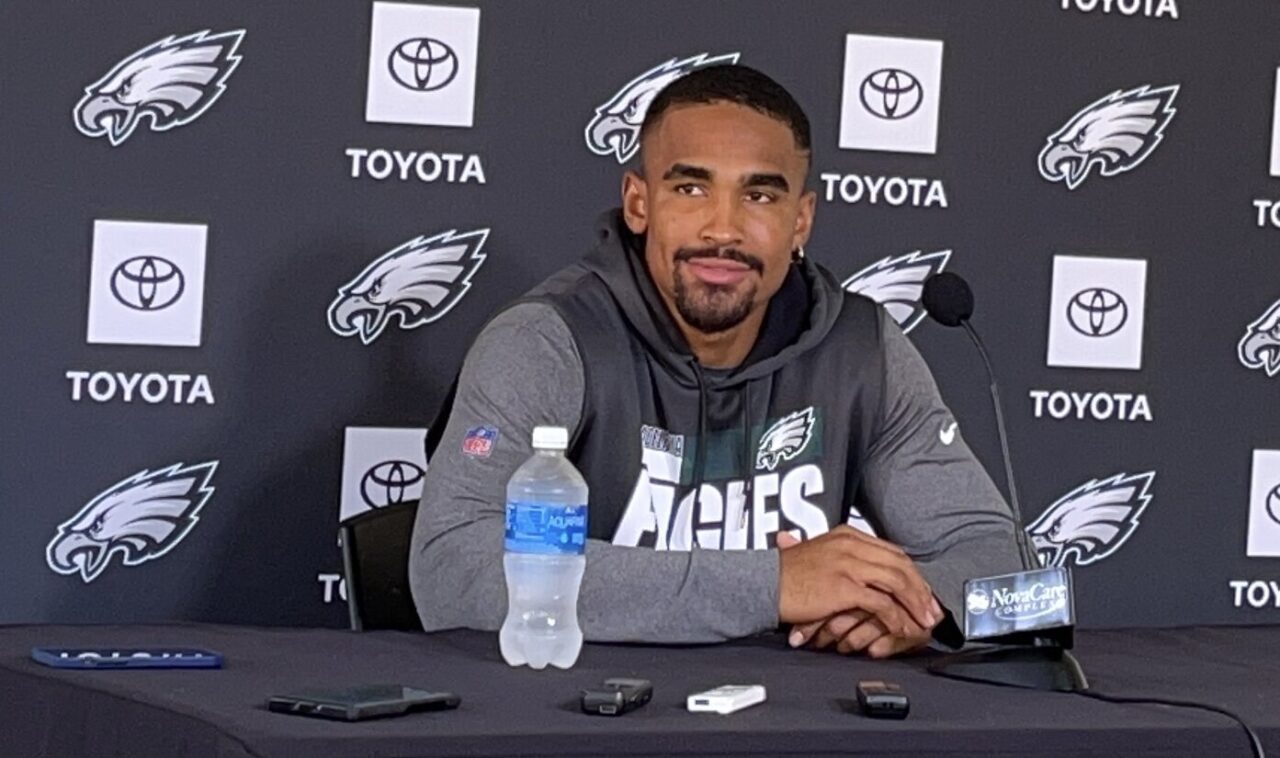 (ITB photo: Jalen Hurts threw his first two INTs of the year vs. Dallas and struggled with accuracy)

Adam Caplan: “He fled the pocket way too much. He didn’t let some plays develop […] our sourcing is very strong on this, he fled way too much. He did not maintain his downfield focus, which was the No. 1 note that I got from three people that I talked to within five hours. There’s no excuse for not letting the play develop. It is not on the offensive line, I’ll defend those guys, they weren’t perfect, they weren’t great. They were very average in this game, but they did not contribute to his struggles.”

Geoff Mosher: “For the first time he looked like he let the moment get too big for him and it impacted the way he was playing. He did not look in control even through adversity in that game and it clearly got to him. He did things that even he admitted we’re just not good enough and part of that is just, stay in there, stay calm. First routes not available? Look for that second one or if you’re going to run keep your eyes downfield. Play within yourself.”

Caplan: “To have two carries, it’s embarrassing. Sirianni should be embarrassed by the way he called the game. He deserves the scorn, you’ve got to be accountable. The thing that bothered me about him is he tried to make excuses. You are down 20-7. [Dallas’] run defense is terrible […] this is probably one of the worst game management situations that I’ve ever seen.”

Mosher: “The offensive line wasn’t great. It’s very rare you can say this but you can find a play or two from every single one of the five offensive linemen and say, ‘You weren’t good enough on that play.’ Usually there’s one guy that sticks out or two guys — but at the same time, they were not terrible. They were not like a sieve, it’s not like there was just constant pressure in Jalen Hurts’ face. I just thought that they would wind up, with their girth and mass compared to a Dallas’ D-Line, they would reset the line of scrimmage a whole lot more. Maybe if they were given more opportunities to run, they would have.”

Mosher: “Once again, you’re asking the linebackers to do something that they’re not equipped to do. You’re supposed to do stuff up front — and we saw this against Atlanta, where you’re stunting into gaps and you’re forcing the running backs to either go to the right, or go to the left because that’s where your linebackers are best. Going from hash mark to hash mark, side to side. If they’re coming straight up the middle at you, that’s a problem for the Eagles’ defense and I don’t know how to rectify that because that’s the personnel they have.”

Caplan: “Yep, one of the [sources] said to me that if this D-Line does not keep the linebackers clean they’re in major trouble there. I don’t know how else to say it, let’s just say they’re very average at linebacker. I’m being nice. They can play a certain way which makes them look better than they are sometimes if you keep them clean. I would say Gannon did a great job and the players executed the hell out of the run defense against San Francisco, for the most part they did a very good job. But that was a different run game, this was a different run game and a different back, [Ezekiel] Elliot looked great.”

Caplan: “Not having Brandon Graham crushed them this game. Not only did it crush the run defense because he’s a really good run guy, plus he can play inside. He’s an unbelievable pursuit run-stopper, he’s really good at it and they don’t have anyone who could do that. Derek Barnett, I don’t know what to tell you, he’ll flash a little bit in a game, he’ll make mistakes. He’s got to play because they just don’t have anybody else.”