After a tough Eagles loss at home to the Chargers last weekend, Adam Caplan and Geoff Mosher dialed into their personnel sources to break down the tape.

On the latest Inside The Birds podcast, Mosher and Caplan discuss their takeaways from tape study along with injury and transaction updates.

Adam Caplan: “The Eagles also, I believe for the first time the season, only protected three players – but the one of them was not Jordan Howard. I don’t know what to make of that. Howard obviously reverted back to the practice squad on Monday, by rule he has to. I didn’t understand it but we’ll get it clarified because you typically … would protect the guy first on Tuesday, but I’m not sure if he signed a deal or agreed to a deal on Tuesday morning or Monday afternoon I don’t know.”

Geoff Mosher: “As of the time we’re recording this, nothing’s happened here, but there’s no reason to cut Mac McCain – or waive Mac McCain, which opens up a spot on your 53 man roster – if you’re not going to fill that spot. I have to think and assume that you’re gonna fill that spot with Jordan Howard, who you just did not protect on the practice squad. Now, why didn’t it happen on Tuesday? I don’t know. Maybe it needs to happen Wednesday. I don’t know. But I would guess that is going to happen sometime soon that Jordan Howard takes the 53rd spot that’s open.” 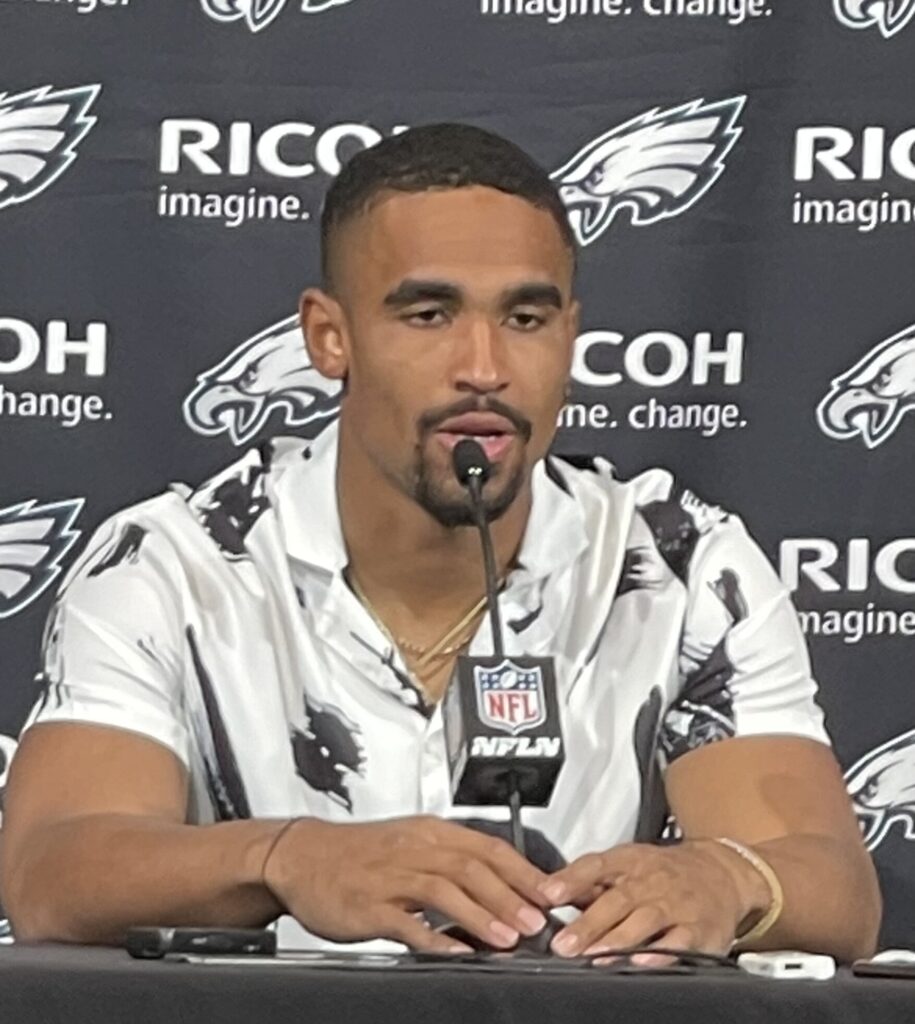 Mosher: “There’s like a faction of people who think that Kenneth Gainwell is not seeing the ball enough and are like, ‘How come they’re not getting Kenny Gainwell more involved?’ I think that there’s this natural greediness inherent in all sports fans. This kid is a rookie who was picked in the fifth round, right? He’s like 200 pounds on a good day. He did not play at all last year. He opted out of his senior year and then in his junior year, he was not a high-volume runner, either. He was a runner and a pass catcher in that Memphis offense. So if the coaches plans are, ‘He’s our No. 3 running back, he’s our changeup, he’s our scat, whatever you want to call it, pass catcher, and we’re not going to change that … we have two other guys who can move the ball in Boston [Scott] and Jordan [Howard] and we’re not gonna accelerate his roll just to accelerate it. We have a plan for him to develop in that way,’ … I think  that’s smart.”

Caplan: “When it mattered most, he kept the team in it. Look, it was not pretty the first quarter, particularly when he came out he was off and [Nick] Sirianni bailed him out by running it. They ran the hell out of it. The double teams were great, everything worked, and then in the third quarter when it mattered, he and [Devonta] Smith hooked up and it was beautiful.”

Mosher: “I agree with you. Here’s what I’m starting to feel about Jalen Hurts. The one thing that I like about this kid a lot that has nothing to do with leadership and poise and all the other stuff that is obvious is that even when he is not doing the right things, when he’s not accurate, when he’s a little late when he’s dropping his hands, he does not throw inaccurately to the point where it’s so wild like nobody can make a play. Even with the ball placement, it’s not that far off. I really am starting to believe that this kid can become a good starter in the NFL. However, I don’t know how long it’s going to take.”

Caplan: “The fact of the matter is you can say he’s coaching to the limitations of personnel, I know we use that phrase a lot in our show. But not doing anything to disrupt the quarterback’s timing was ridiculous. Just the fact that they only lost by three points is almost a miracle in and of itself with this stuff, they had a couple red-zone stops, great. But they gotta do something else, you can’t let the quarterback just go off like this with these short area throws.”