Facing injuries to key players and a double-digit deficit, the Philadelphia Eagles showed resiliency in a 17-16 victory over the Indianapolis Colts.

On Inside The Birds Postgame Live, Adam Caplan and Geoff Mosher were joined by Eagles Hall of Fame Offensive Tackle Tra Thomas to review the team’s latest win. 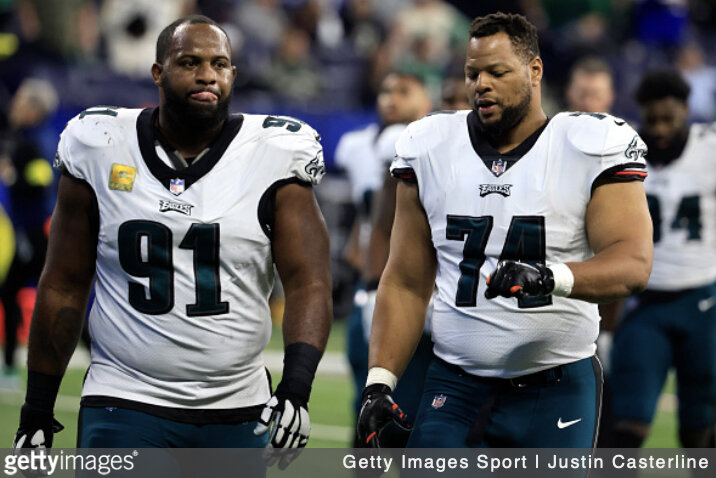 A return to form for Fletcher Cox and the signing of Ndamukong Suh will be keys to improving the Eagles run defense.

Tra Thomas: “I think Jalen (Hurts) was supposed to follow [Jason Kelce], but Jalen is a runner, so he sees the whole middle of the defense is not there and decides to run right up the middle and go ahead and take this touchdown. The defense saw Kelce pull, so they took off after Kelce there.”

Geoff Mosher: “If I’m to look at the box score and try to make a conclusion, in absence of Dallas Goedert’s production, we saw Jalen Hurts outrush Jonathan Taylor, and we haven’t been seeing Jalen Hurts run the ball a whole lot this year. Some of that was designed, some he had that really nice scramble in the fourth quarter, but that seemed to be, today, the way to make up for Dallas Goedert.”

Adam Caplan: “It’s certainly part of it when he didn’t like what he saw over the middle, which was pretty much most of the game. Hurts ran and he was dynamic. He had some good moves and scored on the ground.”

Caplan: “They’re very limited in what they can do. They don’t have the physical presence until (Dallas) Goedert comes back. (Jack) Stoll has to stay in-line and (Grant) Calcaterra is not physical enough. Tyree Jackson is maybe big enough, but he’s so inexperienced. They were heavy three wide, which we thought coming in. They’re just going to have to figure out a way going forward until Goedert gets back. You now have this tape without Goedert, you see what they’re doing to you and they’re going to have to manage it.”

Mosher: “It looked like the biggest impact of not having Dallas Goedert was in the run and RPO game if you take Jalen Hurts out of it. The running backs only ran 17 times for 55 yards.”

Thomas: “On some of them, [Hurts] made the wrong read, but the defensive end came crashing. The RPO can be played if you have a backside linebacker that’s disciplined or if your defensive end can be a little bit more disciplined. We were able to hand off the ball a couple of times and then they stuffed us. Some of the combination blocks weren’t as clean as you want them to be. We were getting pushed around a little bit up front. I would have liked to have seen some of those combination blocks more physical, get up there to the second level to create some holes so our running backs can cut loose a little bit instead of Jalen having to run so much. I don’t want to see Jalen have to carry this ball 16 times.”

Caplan: “It was a bad start. I thought if they did it again on the second series, they were going to lose. But they didn’t…In the end, they adjusted. They did a good job against the run over time and I thought the rookie offensive coordinator for the Colts bailed the Eagles out a little bit. The veteran staff that the Eagles have outclassed them as the game went along and they found a way to win. Offensively for the Colts, I thought (Jonathan) Taylor should have gotten the ball way more.”

Thomas: “You go back and look at that first drive: 10 plays, eight runs right down your throat, taking it straight down to the house for a touchdown, that’s not what you want to see. The Colts bailed you out because they come back and throw three passes, a three and out.”

Mosher: “Jonathan Gannon definitely did things different in this game from a personnel standpoint and also schematically. You saw those linebackers, whether they were sugaring the gaps or getting momentum going toward the line of scrimmage before the snap to give themselves some extra momentum.”

Caplan: “This would have been a blowout if they didn’t adjust some stuff. Parks Frazier, the interim offensive coordinator of the Colts, helped them because he decided to throw three straight plays in the second series. But they adjusted. The second and third quarters, they did a really good job against the run.”

Mosher: “There were plenty of times Fletcher fought off a double team, stalemated, got through it. He clearly can do it. This is why there have been times where the Eagles have been fine against the run. I thought today was a day where Fletcher Cox decided to show up and play like a run defender.”

Thomas: “When you get fresh blood in, you have some new guys come in, you can’t let them outperform you now. You have been here for a while now, so you need turn your game up a little bit. Especially when you’re the hype guy trying to get the defensive line all fired up and ready to go. I think this defensive line feeds off of the energy that Fletcher brings to the table. If he comes out and plays flat, that defensive front is usually a little flat, but when he comes out and he has that energy and is playing like that, they feed off of that because he’s the leader in that group.”