The latest Philadelphia Eagles victory showcased a passing offense that continues to improve and sound coverage on defense.

On the latest episode of the Inside The Birds podcast, Adam Caplan and Geoff Mosher gave intel from the All-22 tape of the 24-8 win over the Washington Commanders. 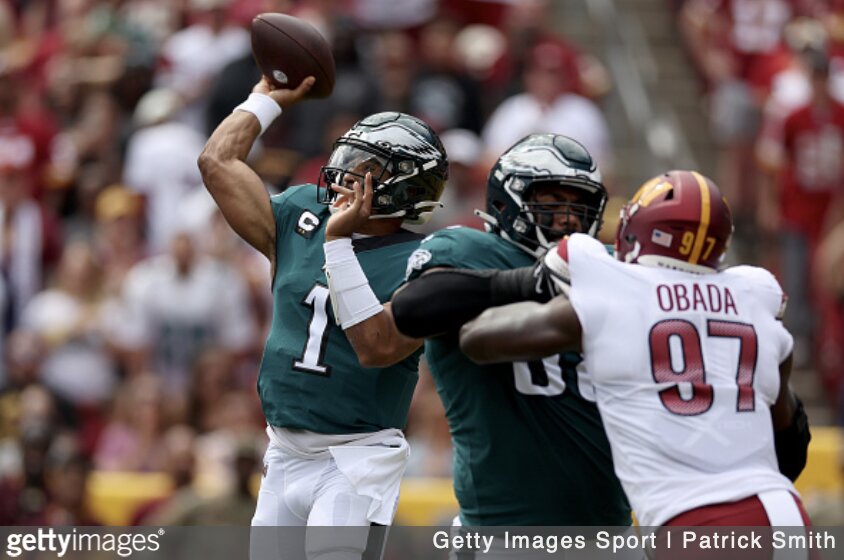 Jalen Hurts’ improvement in his mechanics is a reason why the passing game has taken off.

Adam Caplan: “We’ve talked about this for five years that the owner wants this to be a passing team. We talked all offseason that this was going to happen, and we outlined last week the first two games they were up about five-and-a-half attempts per game…They were so aggressive. It wasn’t just the six downfield throws, [it was] the intermediate game. Here’s what they did: 27 passes in the first half, the most of any game in Hurts’ career. It’s just my sense, from talking to two people this week in particular, there is a such a trust now in Hurts because last year they weren’t doing this.”

Geoff Mosher: “They are third right now in pass yards per game at 297 and by a pretty large margin they’re number one in the NFL in yards per pass play at 9.08. It just shows you have effective they have been for the first three weeks.”

Caplan: “All three of their top receivers, (AJ) Brown, (Devonta) Smith, and (Quez) Watkins, all got shot plays. It just goes to show the confidence they have in the second year of this group with Hurts. They trust him, there’s no question.”

Mosher: “I think the reason his mechanics are so much more fundamentally sound is because he’s making throws with both of his feet on the ground planted and that enables him to follow through from his carriage point. Also, the offensive line has kept minimal damage off of him, but he’s also helping that by making quicker decisions and not holding on to the ball as we saw the other quarterback Carson Wentz did for Washington.”

Caplan: “If you want to know about AJ Brown’s leverage, watch the touchdown catch. There was another pass he caught down the right sideline, you have to see what he did.”

Mosher: “The slant touchdown is amazing, because most receivers are not going to bully their way for those three extra yards, not because they don’t want to, but they’re just not physically able to.”

Mosher: “When you talk to people who have seen the tape and even if you watch the tape yourself on the All-22 and you know what you’re looking at, what you realize is the untold story is that a lot of those sacks were because of phenomenal coverage concepts by Jonathan Gannon that we talked about that he wants to do this year – whether it’s matchup zone or pattern matching, and the ability to take away some of the stuff across the middle and make the quarterback have to go somewhere else. The coverage concepts and the actual coverage itself, were the perfect marriage to allow those defensive linemen the split second they needed to get up onto Carson Wentz.”

Caplan: “Here are my notes from various people: Mostly zone, matchup style, zone exchanges were tight. This is the defense that Gannon wanted to run last year but he couldn’t…This is the heartbeat of the Vic Fangio defense is matchup principles and they’re doing that. The zone exchanges are phenomenal.”

Mosher: “The Commanders really tried on third down to work either (Terry) McLaurin or (Jahan) Dotson from the slot along with their tight Logan Thomas from the other side. They tried to work the crossing routes, mesh points in the middle of the field that either catch guys in windows or get the coverage confused. Washington tried a ton of those on third down and the Eagles did such a good job. Let’s say it’s Avonte Maddox lined up in the slot on McLaurin and he’s in a matchup zone. He’s running with him long enough and being sticky enough to the point where now he’s in the middle of the field, he passes it off to T.J. Edwards or Kyzir White. There’s nowhere in the middle to throw the ball because the window is too closed.”

Caplan: “Jordan Davis had a couple of really big-time muscle plays where he just moved the guy, but he still plays too high. He has to learn; he has to get better flexibility. This is going to be over time. He’ll be more consistent. He’ll learn about what it takes to be a professional and what you have to do. But the good thing is you see the flash.”

Mosher: “There are times where he is just so much bigger and stronger than the guy in front of him that he just puts his hands up and moves the guy backwards like he did to Wes Schweitzer. But there are times where you need technique and leverage and he does not excel yet in that part of the game. When you’re that big, you get tired, so you lose your pad level pretty easily.”

Caplan: “The best defensive player on the field Sunday, and it’s not a shot at Darius Slay, was TJ Edwards, based on the comments I got. Edwards in coverage was tremendous, because on the zone drops you have to be with the handoff system.”