Not every question and answer from Tuesday’s Eagles press conference centered on Jalen Hurts.

Plenty of responses  – or intentional non-answers – gave some indications of the Eagles’ plans in the coming days, weeks and months as the team moves into roster-building mode in preparation for the 2022 season.

Here are some takeaways from the press conference held jointly by Howie Roseman, the team’s executive vice president of football operations, and head coach Nick Sirianni: 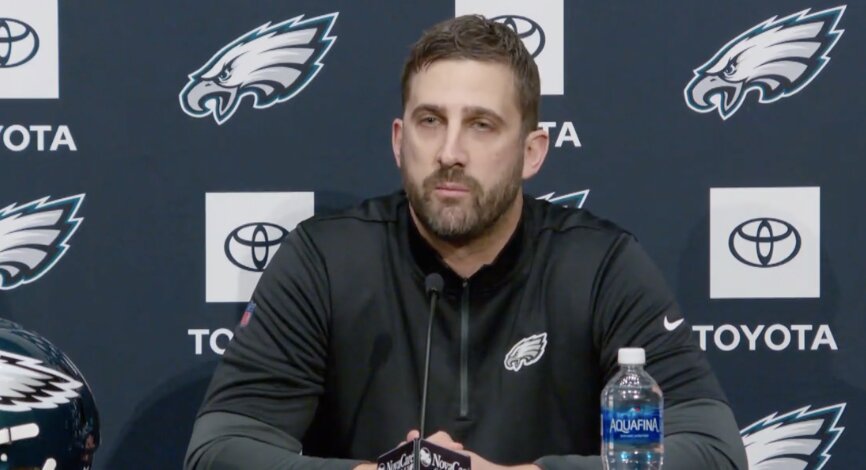 No team hires and fires position coaches and assistants – especially after playoff seasons – with the frequency that the Eagles do.

The Eagles have fired at least one assistant coach – and often more – each year for the past three seasons and four of the past five, including four in 2019 despite winning the NFC East.

So it was hardly surprising to hear Sirianni elude the question about the fate of his coaches by explaining that he hadn’t yet met with all of his staff and remains in evaluation mode, which should probably be a red flag for any of his assistants who preside over positions that didn’t perform well.

At least Sirianni was smart enough to avoid answering the question before his meeting with owner Jeff Lurie, as opposed to former coach Doug Pederson, who days after the 2019 season told the media that his assistants would all return.

Sirianni had no problem revealing that he sees 2020 sixth-round pick Quez Watkins as the team’s No. 2 receiver, ahead of 2020 first-round pick Jalen Reagor.

The stats already backed Sirianni’s remark, with Watkins finishing this past season with 647 receiving yards, 348 yards more than Reagor, who only caught 33 passes after catching 31 as a rookie. Watkins also played 21 more snaps than Reagor.

“I don’t think that there are a lot of true No. 1 receivers in the NFL, and I think we have one [in DeVonta Smith] that is going to continue to get better,” he said. “Then I look at Quez Watkins, as he’s our No. 2 wide receiver. He has big-time speed, and he has a knack to make plays. Of course, you always want to get – the style of offense that we played this year didn’t allow for Quez to get as many touches as he probably deserves, but we did everything we could do to win each individual game.

Sirianni said he’s looking for more production from Reagor, who’s in “the No. 3 spot right now,” and for Reagor to tap into that “extreme talent” that the coaches believe he has. Roseman said he had already met with Reagor to express what the former TCU wideout needs to do this offseason to recognize his potential in 2022.

Stay tuned here, as the Eagles are likely to address this position in either free agency or the draft –– perhaps both – which could lead to a change in Reagor’s future with the team.

With three-first round picks at 15th, 16th, and 19th overall, Roseman was asked if he’d be more open to using high draft picks on positions he normally doesn’t bolster in the first round of the NFL Draft.

“I think we have a philosophy on how to build this team, a philosophy that we think has been successful,” he said. “Obviously, you’d like more championships every time you’re out there, but we’re going to stay committed to the way we think of building the team.

“In terms of having the three first-round picks, I think that it’s important we bring in good players that fit the system that our coaches run and that also fit the fabric of this team. We don’t go into a draft saying we are not going to do something. For us, it’s all about the skill-set of that particular player and the football character of that player.”

If you were hoping for some clarity on the Brandon Brooks situation, there wasn’t much.

The Pro Bowl right guard, who has been out since Week 2 with a pectoral injury, never returned for the season. Sirianni routinely told reporters throughout the year that he had no update on Brooks.

Roseman only said it was “really important for us to make sure that Brandon Brooks ended the season healthy and to make sure that he had an off-season where he was healthy, and he wasn’t rehabbing” without providing much more context.

“That is the extent of our communication,” he said. “I met with him at the end of the season, and you’re talking about one of the greatest players, one of the greatest guards in the history of the franchise. I have tremendous respect for him as a player and as a person. Those are the conversations we’ve had with Brandon up to this point.”

Doesn’t seem likely that Brooks will be back with the Eagles in 2022.

Roseman admitted that in past seasons, he made more aggressive free agency and trade moves because of his belief in the team’s ability to contend for the Super Bowl.

Despite a nine-win season that included a playoff berth, Roseman’s tone didn’t seem to suggest an aggressive offseason approach with title contention in mind.

“I think until you’re really talking about a team that is hosting home playoff games and getting the 1 and 2 seed, you’re in building mode,” he said. “I think that’s where we are right now.”

Roseman mentioned building and adding the right pieces several times during the press conference in response to different questions, which gives you an idea of where he sees the Eagles even after a surprising playoff run.

But that doesn’t mean the Eagles can’t take a jump into contention next season. Roseman’s additions after a 7-9 season in 2016 were Alshon Jeffery, Torrey Smith, Chris Long, Tim Jernigan, Patrick Robinson, LeGarrette Blount and Ronald Darby.

Of those moves, only the Jeffery and Darby additions were considered major boosts. A year later, the 2017 team won the Super Bowl.

Still, as aggressive and Super Bowl-obsessed as Roseman and Lurie are, it’s odd to hear a tone of patience coming out of the NovaCare two seasons removed from a 4-11-1 year and coming off a 9-7 season. That would make three straight seasons where the team isn’t viewed as a Super Bowl contender if only modest upgrades are made.