The Philadelphia Eagles displayed another strong quarterback performance from Jalen Hurts and an improved defense in a 24-7 prime-time victory over the Minnesota Vikings on Monday night at the Linc.

On the Inside The Birds Week 2 Postgame Show, Adam Caplan and Geoff Mosher were joined by Eagles Hall of Fame offensive tackle Tra Thomas to break down the Eagles’ dominant victory. 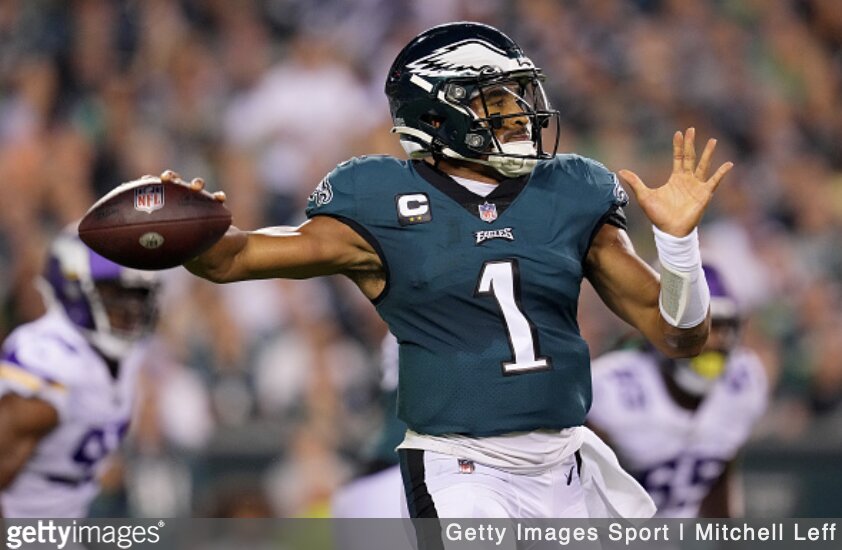 For the second week in a row, Eagles QB Jalen Hurts excelled both in the air and on the ground with a combined 390 yards and 3 TDs.

Tra Thomas: “I think that the guys overall did a really good job in protection. You saw a couple of times where we talked about those zone reads where they were getting upfield, a couple of penalties there. But I thought overall, they came out there and imposed their will against this defensive front, especially with some big runs with Miles Sanders and Boston Scott. It felt like it was a total domination by this offense.”

Geoff Mosher: “You saw him brilliantly pick apart the defense methodically, spreading the ball to everyone. This is probably the best Jalen Hurts we have seen as a passing quarterback.”

Thomas: “He was very aggressive. He played up close and really got into some press, was out there sitting on routes. You could tell he was really in his zone, and the defense fed off of it. That’s what you needed to throw Kirk Cousins off.”

Adam Caplan: “It probably won’t show in the numbers, but Fletcher Cox played like a man tonight…He got after it, there’s no question.”

Caplan: “I think Gannon now knows what he has. They’re not going to win with four-man pressures. He’s going to have to blitz.”

Mosher: “When you have players now – which they gave him – who are athletic and faster, whether it’s [Haason] Reddick, Kyzir White or T.J. Edwards in year four, you have to be able to show some trust in them. I’m curious to see how many blitzes in total he threw, but the fact that he’s doing it situationally represents a nice step forward.”

Thomas: “I think [illegal man downfield] was a big emphasis that was probably sent to referees. It just happened. This was your week to get caught. We’ll get back to being normal next week.”

Caplan: “They had eight in this game and it seemed like they had 15. They shot themselves in the foot…The good thing is it’s all correctable.”

Mosher: “Two straight weeks where we have seen opponents isolate, at times, when they think he’s going to be – or determine that he has to drop – into coverage, and coverage is not his forte.”

Caplan: “You’re going to have to figure out something, Jonathan Gannon, because it’s not working the way you’re using him. You’re paying him $15 million a year to get to the QB.”

Thomas: “I thought he had a couple of good rushes out there tonight. He came him and gave the tackle a nice little one hand stab, got low, took the edge, was working a couple of spin moves. He did a really good job of picking up some of the screens out there. I thought he was active. It was a lot better than what we saw from last week.”