The Philadelphia Eagles’ 38-7 win over the New York Giants in the divisional round of the playoffs was a showcase of the team at its very best.

On the latest “Inside The Birds” podcast, Adam Caplan and Geoff Mosher provided sourced intel from the All-22 tape of the divisional round matchup. 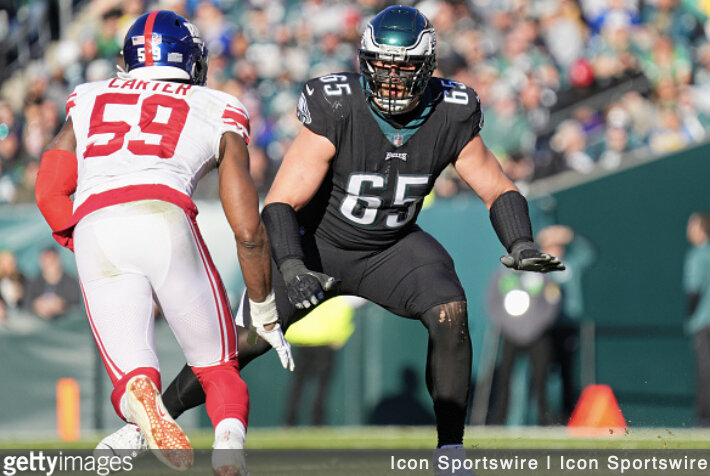 The Giants were no match for the Eagles offensive line

Geoff Mosher: “Every single one of them had a really good game, including Lane Johnson, who deserves all of the respect in the world. You could see him touching his midsection and groin area sometimes.”

Adam Caplan: “This was choreographed so well. Everybody blocked well; double teams, combos, gap scheme. Everything that they did, they moved. You could not move Dexter Lawrence off of the ball until this game. It’s one thing to win their combo blocks, but they also won their one-on-one blocks.”

Mosher: “I thought the most encouraging thing was actually a bad thing, when he got stripped sacked and nailed on the shoulder. But the fact that it didn’t seem to bother him, he took a pretty hard hit and had no issues from that point on. You saw him running, he was a little careful at times as he should be. I think this is a good enough Jalen Hurts from an injury standpoint to not have concerns going forward.”

Caplan: “It was so evident that you could see it on the coaching tape: his way of hiding the football on RPO’s, they seem like they ran a ton of them, he holds on and hides so well. Watch Jaylon Smith, he didn’t know where to go.”

Mosher: “There were some really interesting RPOs. Sometimes you have your typical RPO where your line looks like it’s zone blocking and then he pulls back and makes a slant throw, but you had a couple of RPO’s where you had Jason Kelce pulling, so it could have been outside power. It just looked like the way the rest of the line was blocking that if you hand the ball off behind Kelce or pass because everybody else on the line were in pass sets.”

Mosher: “I know Gainwell had 100 yards, and I’m not taking anything away from him, but he was also the recipient of good scheming and blocking. He picked up 14 yards on the fake QB sneak where they just pitched it to him outside and he ran untouched. Of all of the running backs who may have had the ‘college holes’ – the wide gaping holes – he might have had the most of the three. He made the most of it and had a really good game.”

Caplan: “On the 35-yard touchdown, watch his change of direction. We had said that the one thing missing from him was explosive plays. He looked fresh and ran hard.”

Mosher: “When you see Jonathan Gannon play man this much and a little bit of different things, my takeaway was he did this against the Giants because he had no fear of Richie James, Darius Slayton, and Isaiah Hodgins. It’s easy to be the bully when you’re that much better than the offense.”

Caplan: “They erased them, they completely took them out of the game. Their zone exchanges were phenomenal, communication was great. The zone pressures were great, Cover 0. Gannon brought it out and the offense was shutdown. Clearly, the two weeks off helped a ton. There was a ton of post-snap and pre-snap movement.”

Mosher: “The Giants did try to attack him a little bit early, they got him once or twice in the first quarter because they spread it out and forced him into a man situation, but not for anything big, and then they couldn’t. They tried, after that I thought Blankenship was really good. He made some good tackles, especially on screens and in the box. For a game, that proved to be the winning formula: Reed Blankenship at safety and C.J. Gardner-Johnson at slot. I imagine they’ll keep doing that with Avonte Maddox out.”