PHILADELPHIA — It wasn’t until after Saturday’s 38-7 thrashing over the Giants that Reed Blankenship learned he had become the first undrafted defensive rookie in franchise history to start a postseason game.

The 23-year-old Blankenship, who serves as the Eagles’ resident third-level enforcer, resembled a heat-seeking missile against the Giants, tallying five tackles – one for loss – and a pass defended.

The modest stats don’t jump off the page but represent something more consequential. With seemingly every stop, the tone was firmly set for the impending onslaught.

Blankenship’s second-quarter stop on Giants running back Saquon Barkley – for a four-yard loss – perfectly encapsulated his gritty, grimy brand of football and the hit-somebody-before-they-hit-you mantra to which he adheres. 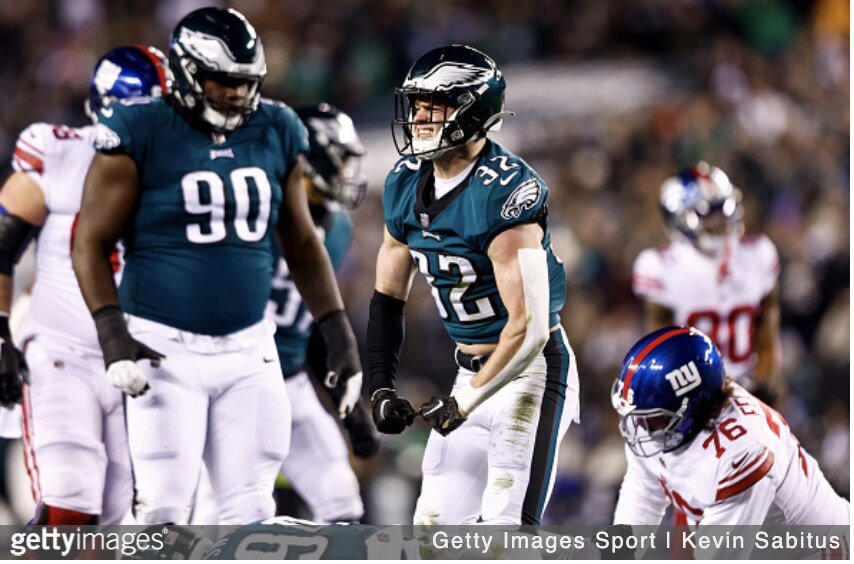 He also nearly came away with his second career interception in the game’s waning moments.

But the impact of Blankenship’s performance in an NFC Divisional round win makes it easy to forget that the once-unassuming Middle Tennessee State defender began his career as a training camp longshot clawing at the fringes of a talented roster.

He would have to wait five weeks to join the gameday roster and didn’t see a defensive snap until Week 11 in Indianapolis.

“It’s been a roller-coaster,” Blankenship acknowledged. “Starting from training camp, didn’t even know if I was gonna make the team or not. Made the team, started the first few weeks not even being active, then started playing special teams.

“I always told myself, ‘Be ready when your number’s called,’ and fortunate enough I was ready to go when [C.J. Gardner-Johnson] went down and I think I’ve made a big impact. It’s been great. I’m very excited right now.”

Forced into the proverbial deep end after C.J. Gardner-Johnson’s lacerated kidney in Week 12, Blankenship quickly proved he could adequately steady the ship in the interim.

Seven plays after replacing Gardner-Johnson, Blankenship read the eyes of Packers quarterback Aaron Rodgers, who floated an ill-fated pass in the direction of tight end Tyler Davis before Blankenship broke on the ball, securing his first career pick and altering momentum in the Eagles’ 40-33 win.

Known primarily as a box safety at Middle Tennessee State, where he served as a five-year starter, Blankenship faced questions about his fluidity in coverage and sustainability.

However, Blankenship showcased a multifaceted skill set and adequate range on the back end with increased snaps. He ultimately grew into his role as a crucial cog in the NFL’s stingiest secondary.

As is the case for most young players, development doesn’t come without the inevitable growing pains.

But Blankenship’s diligence behind the scenes – along with the tutelage of his veteran cohorts, most notably Marcus Epps – has prepared the undrafted rookie for critical moments, like Saturday night, when the lights shone brightest.

“Reed plays – I’m not gonna say he plays like a veteran – but he plays like a guy that’s been playing for a minute,” cornerback James Bradberry said recently. “That’s his work ethic. Also, his ability to pay attention and obtain knowledge from the coaches throughout the week. He’s a very smart guy, and he’s also a physical player. And we need that on defense.”

But despite the cohesion shown during Gardner-Johnson’s absence, the Eagles faced a personnel dilemma when the NFL leader in interceptions returned to the backfield.

With nickel cornerback Avonte Maddox out indefinitely because of a toe injury, the question became: Would Gardner-Johnson relinquish his role opposite Epps and undertake Josiah Scott’s nickel duties, or would the secondary be better served with Blankenship remaining alongside Epps while Gardner-Johnson bumped back into his natural position as a slot defender?

The latter pairing so far has proved to be the most fruitful formula for the Eagles’ defense and has armed defensive coordinator Jonathan Gannon with sudden optionality in his personnel deployment, while also allowing Gannon to disguise his coverages.

“We’re very diverse in what we can do,” Blankenship said. “We disguise real well, we know what to do, we know what our job is. And it’s just the way we prepare.  That’s what’s really cool about the back end right now.”

While it remains to be seen if Maddox will return for the conference title game, the team has found a sound contingency plan, one that wouldn’t have even been plausible without Blankenship’s rapid – if not unlikely – development.

While Blankenship has played a significant role on the field and in Eagles underdog lore, his improbable second-half rise to relevance is one of the season’s most under-discussed storylines.

As one might expect, Blankenship’s growing prominence on a team with Super Bowl aspirations has only fueled his fire to succeed.

Staying true to the ambitious regimen that enabled him to overcome steep obstacles as an inconspicuous rookie free agent, the Athens, Ala., native doubled down in his convictions and preparation.

“It stays the same,” Blankenship said. “I take as many notes as I can, ask as many questions as I can and just don’t think too much about some stuff. Don’t make stuff too complicated.