The Philadelphia Eagles are set to begin their quest for their second Super Bowl win against a familiar foe.

On the latest episode of the “Inside The Birds” podcast, Adam Caplan and Geoff Mosher previewed the Saturday night NFC Divisional round matchup against the New York Giants and gave their predictions. 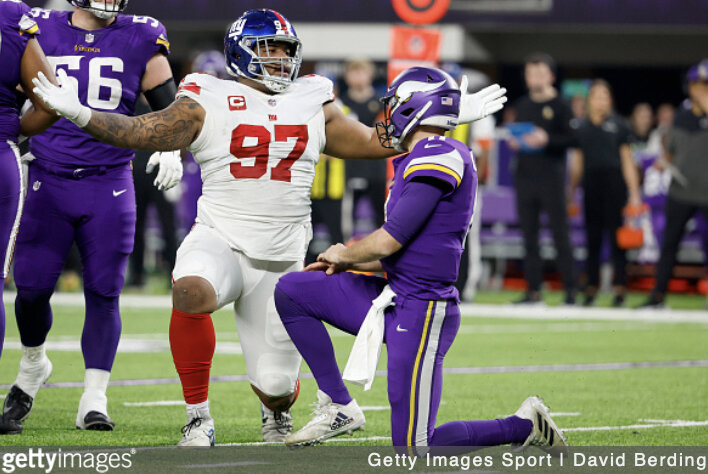 Geoff Mosher: “From what we understand, what he’s trying to play through is not easy, not pain free, not comfort free. This is an injury that can get worse and he’s playing a position where you can’t protect it. He’s just going to go out there and gut it out. I think some people would not even try to get on the practice field and just let it all hang out whenever you get to play, but at least he’s trying to test himself, see what he can and can’t do. He’s been limited mostly. The fact that he’s trying is about as admirable as it gets and also shows that professional athletes are on a different level.”

Adam Caplan: “It’s a muscle core injury, so you try to strengthen everything around that. The problem is you have to manipulate your body a certain way. We know that Jack Driscoll was his backup for two games and he didn’t play great. The Eagles are just going to have to live with this combination of Johnson and Driscoll.”

Caplan: “I believe with the weather being fine – and people I spoke to this week felt the same way I do – the Eagles are going to come out throwing against that secondary. Since the [first] Eagles game, they started to play more zone, and they played a lot more zone in the game this last week [against the Vikings]. I don’t want to say they played a (Jonathan) Gannon-type of philosophy, but they said, ‘You can take anything you want in front of us but you’re not getting it over our heads.’ Yes, they played man inside a bracket with Adoree Jackson, but they always seemed to have a safety behind to take anything away to Justin Jefferson. And it worked, they just got it done.”

Mosher: “The concern I have going into this game is not just right tackle. The last time these teams faced each other, Wink got way too many free rushers at the quarterback and he did it the way he always does: his blitzes are illusions, you think they’re coming when they’re not, he overloads so your line slides to the left and all of a sudden the guys on the left are dropping back and someone’s coming from the right. You can’t have Jalen Hurts getting hit by free rushers, especially on a four-man rush…Jalen was a top five QB this year against the blitz, but there’s blitzing and then there’s what Wink Martindale does.”

Caplan: “Dexter Lawrence is an absolute stud. You forget how big he is. They play him at pure nose, pretty much. Last week against Minnesota, he had eight pressures. That’s scary…Just have a plan if they start moving him around. If Lane Johnson leaves early and they move Lawrence, if you have to keep a tight end in every once a while, do that and protect your QB.”

Mosher: “This Giants front four is a stout and tenacious front four. I wouldn’t call them explosive. This team doesn’t fire off of the ball, but they are second-effort guys, tenacious, they can get to the QB, it’s not about get-off as much as it’s about running you over and playing strong and stout.”

Caplan: “This could be a good Goedert game. Get him down the seam, or if they’re playing zone, you can still throw screens. If they put (Xavier) McKinney on Goedert, I know McKinney has good size and he can hit, but Goedert’s way taller than him, got to get him.”

Mosher: “They were 7-2 because they were running the ball a ton with Saquon Barkley at the time. You would have thought this was going to be the strength of the Giants. He was number two in the NFL in carries. Since then, even though they went through a rough patch, they have morphed from being a heavy run team to more of a passing team, despite the fact that none of the guys they throw the ball to you have ever heard of before the season started.”

Caplan: “Daniel Jones is a very quiet guy. Doesn’t say very much, was not an aggressive thrower. He was browbeaten by the former staff, afraid to make a mistake. They weren’t totally sure if they could reach him, Now, he takes to coaching. They’re letting him throw the ball more because they trust him.”

Caplan: “This is from one of my guys: he’s on his back too much. He loses hand placement. His hands were not aligned correctly and (Haason) Reddick beat him badly, he was relentless against him.”

Mosher: “In the little that I’ve seen of Evan Neal – you see this in a lot rookies – your timing between your set and punch is not always synonymous. Some guys are great athletes, but they don’t have the timing down on the post leg and the punch. I feel that’s one of his issues. His hands don’t look like they’re synonymous with his set.”

Caplan: “They don’t handle stunts very well, I was told. This is where (Fletcher) Cox and (Javon) Hargrave should be able to get them. Jon Feliciano certainly will not be their starting center next year. Nick Gates, I give him credit for being able to come back from injury, (Mark) Glowinski’s just good enough to be out there…I’m expecting stunts, I know that Gannon doesn’t like to blitz very much, but they have to win on stunts. The Giants are not athletic at all on the inside and the Eagles have a very high win rate when they stunt.”