After a bye week to rest players and recover from injuries, the Philadelphia Eagles have started preparations for the divisional round of the playoffs against the rival New York Giants.

On the latest episode of the “Inside The Birds,” Adam Caplan and Geoff Mosher provided injury updates and intel for Saturday’s matchup. 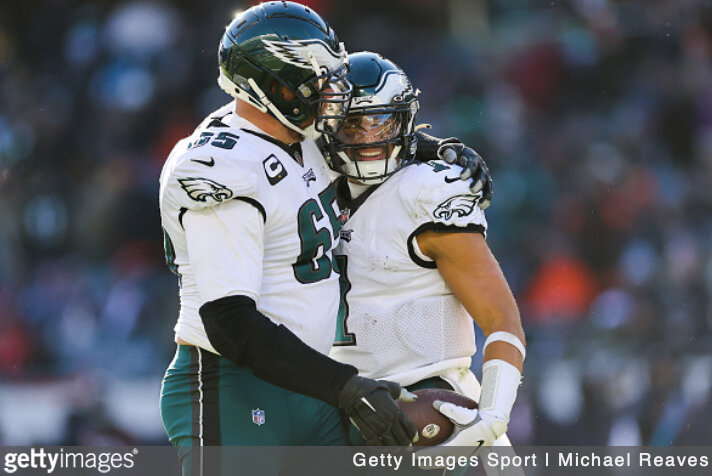 Adam Caplan: “Thursday will be just like their Friday practices for a Sunday game: just about an hour. Friday will be a walkthrough for this Saturday. The Giants and Eagles did the same thing on Tuesday, it’s what you have to do when you’re on a short week. The Giants are going a little longer than the Eagles for the Thursday practice, they’re going 90 minutes.”

Mosher: “It was a walkthrough, but the injury report is supposed to reflect what it would look like if they had practiced. If they had practiced, Jalen Hurts would have been a full go. You heard him say he’s feeling good, you heard Nick Sirianni say he’s ready to go. I think we all still assume he’s not going to be 100%, but good enough to play.”

Caplan: “You’ll know all you need to know about Jalen Hurts’ shoulder if he’s not running on Saturday night in the first quarter. If he’s running and he’s dodging like he does, he’s still not at 100%, but the fact of the matter is he has improved.”

Caplan: “He’s not expected to play. He didn’t participate in the walkthrough Tuesday. There’s still hope that if they get to the Super Bowl. I don’t know about next week being realistic, he has to start working back and put pressure on that surgically repaired toe. They thought he has a chance to come back, even if it’s the Super Bowl, that’s why they didn’t put him on injured reserve.”

Mosher: “What we don’t know is after those practices, how did [the injury] respond? How did it make him feel? He was limited on the injury report on the walkthrough, so I don’t know what to think of it.”

Caplan: “We have not heard that he has had a setback or anything. I’m under the impression that what he told the media is exactly where he’s at, he intends to play. I have no idea how long he’ll last, nobody knows. It’s about playing through it and seeing how his core holds up. It’s up to Lane to know his body and what he thinks he can and can’t do.”

Caplan: “I’ve talked to so many people this week who have graded the Giants, they’re a different team since that first Eagles game. The Eagles embarrassed them, they took them to the woodshed. But here’s who came back: Leonard Williams did not play against the Eagles in the Week 14 game. Adoree Jackson didn’t play with his MCL sprain, he shut down Justin Jefferson last week, Xavier McKinney, who broke his fingers in an ATV accident. Context matters, they’re playing much better because these guys came back.”

Caplan: “They’re playing way more zone defense. My friend who does pro personnel said he’s pretty certain part of it is because of what the Eagles did to them. Hurts crushed them against the blitz when they played heavy man coverage. I think Wink probably said, ‘We’re done with this.’ They still play some man, but their zone coverages went way up.”

Mosher: “The mentality that I could see Wink having is when you have so many injuries in your back end, you have to help protect them by blitzing. You’re trying to make the QB hurried and rushed and hope to take advantage of that. When you get guys like Adoree Jackson back, I wonder if he feels more comfortable in his coverage to not have to blitz so much.”