With the regular season complete and the No. 1 seed in the NFC secured, the Philadelphia Eagles will now have two weeks to get healthier and determine how to best utilize their talent.

On the latest episode of the “Inside The Birds” podcast, Adam Caplan and Geoff Mosher gave intel on the team’s injuries and offered insight from the final regular season game. 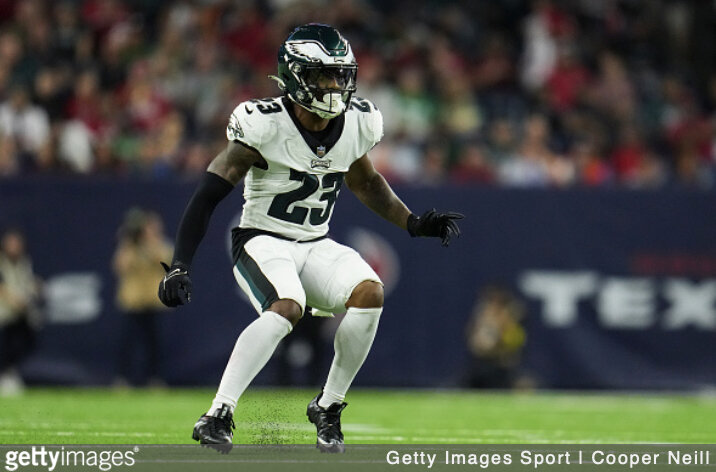 With C.J. Grander-Johnson back in the lineup, the question becomes which position he can be utilized best

Geoff Mosher: “Injuries aren’t black and white. It’s not like you’re 0% or 100%. There’s an in between. His shoulder sprain was complex, there was a collarbone issue there. You’re talking about an injury that’s hard to put a timeframe on. To be 100%, probably four to six weeks. So he went out there and looked like a player who still was getting through the shoulder, and not all of his passes were crisp, he obviously tried to avoid contact and did a little sliding. He has two more weeks now…at that point, he should be almost fully recovered. I would think that two more weeks is a significant amount of time to continue to strengthen the shoulder, throw the football in practice, and be ready to run against whoever they play.”

Adam Caplan: “This offense churns when Hurts is a dual threat QB. The nine runs, I’m not sure if any of them were designed. That’s not this offense. I get it, they’re trying to protect him. It’s clear to me they didn’t want (Gardner) Minshew out there. They thought a 60-70% Hurts trying to get over this injury is better than Minshew…They took shot plays with him, but I don’t think he looked clean throwing the football. Some of it was due to pressure. His timing was off a little bit.”

Caplan: “He hasn’t played at a particularly high level. We understand he’s a backup player. He’s had some tough matchups…if Lane Johnson re-injures himself if he plays in the divisional round, you can’t just all of a sudden put (Jordan) Mailata at right tackle. That’s just not what you practiced.”

Mosher: “We know Maddox had his procedure. He was not on crutches, he was in a boot, which is a positive development. You and I have talked to different people, we’re not getting the vibe he will be available for the divisional round game, but maybe if all things go well, the conference championship, you have a shot there. The Eagles must have thought somewhere that the possibility was there, or else they just would have put him on injured reserve.”

Caplan: “If he starts working next week – not saying he’s going to play – the key is he has to be able to stick [his] foot in that ground and he has to be able to stop, turn, and run. The slot corner position is a lot of movement. Whenever they think he can start practicing, he really has to show himself that he’s back to normal to be able to play. It’s a tough deal.”

Caplan: “I’m not shocked, but I’m a little bit surprised he’s this good. You see a guy who’s maybe 165 (pounds), I don’t know how he does it. He’s not afraid of contact, he’ll take it on. He gets in and out of his breaks, a tremendous route runner. I am blown away by this kid.”

Mosher: “I’m going to go back to the draft, when we were doing a lot of work on him and others.  In the scouting reports we were given, the name Marvin Harrison was brought up as a comparison. Obviously, DeVonta’s a little more of a long strider and built differently, but I think what they were trying to say was his route-running, precision, subtlety, and just the technician that he is. He does everything well. There may not be one thing he’s the best at in the NFL at wide receiver, but he might be one of the most complete wide receivers in that he can do everything at a really high level.”

Caplan: “He played safety on the first two downs and slot after that. My only issue with it is you don’t want to take Gardner-Johnson’s role as a ball tracker. He’s just unbelievable at that. They have never had anyone like this. Plus, to learn this defense at the start of the season, and he’s tied for the interception lead in the NFL.”

Mosher: “I think when the Eagles’ defense is at its best, C.J. Gardner-Johnson was playing safety, and they were producing a ton of turnovers. I remember saying at the halfway point that the reason why the Eagles were head and shoulders above teams was because they were the best turnover ratio team in the NFL. Games in the NFL are won by turnovers. In my evaluation, you put Gardner-Johnson in the better situation to create those turnovers when he’s playing safety and looking at the QB as opposed to playing slot, defending a slot receiver or tight end.”