PHILADELPHIA – For the first time since late November, the Eagles’ secondary exhibited the distinct swagger and cohesion that mirrored the personality of the team’s defensive backfield that had suffocated opposing aerial attacks for the better part of the season.

It might have been due to the undermanned Giants receiving corps in a game that determined the Eagles’ path through the playoffs.

Another, more likely reason for the resurgence could be the return of safety C.J. Gardner-Johnson, whose on-field performance this season has been as brash as his charisma and unrelenting energy.

In his first game back from a lacerated kidney suffered in the Eagles’ Week 12 win against the Packers, the 24-year-old hybrid defensive back spent most of the afternoon manning the nickel cornerback spot – a position that has been in flux since losing Avonte Maddox.

Any concern of the residual rust that typically comes from an extended layoff was laid to rest the moment Gardner-Johnson bore down on a short dump off to Matt Breida on the Giants’ opening drive, limiting the running back to a 1-yard gain.

On the following possession, Gardner-Johnson knifed through traffic to bring down running back Gary Brightwell for a 1-yard loss, putting the visiting team in an unfavorable 3rd-and-8 with third-string quarterback Davis Webb at the controls. 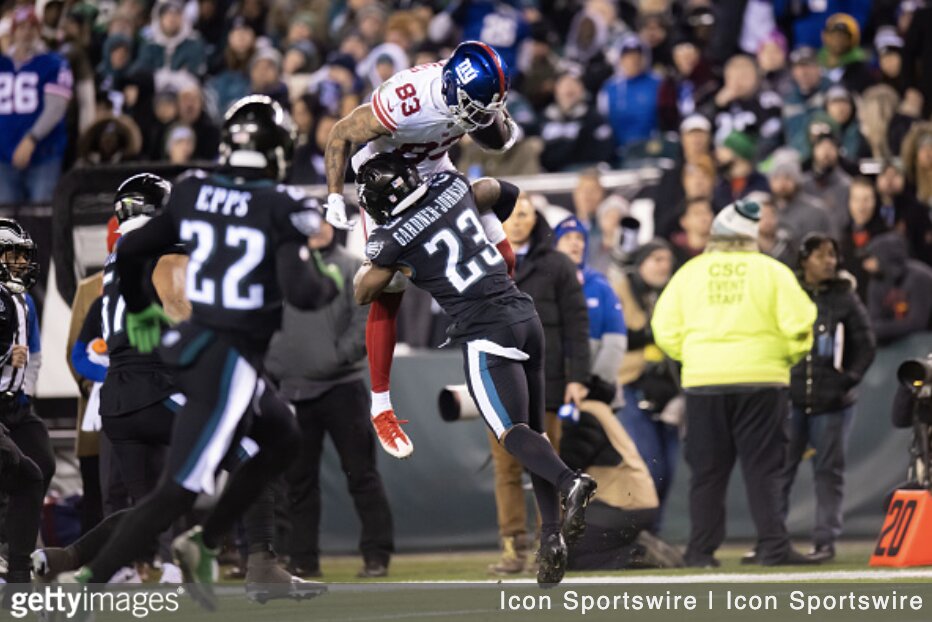 CJ Gardner-Johnson’s return to the Eagles made the defense look whole again.

The communication on the back end Sunday appeared drastically improved and the unit operated in unison, an obvious byproduct of Gardner-Johnson’s long-awaited return to the starting lineup.

The versatile defensive back finished third on the team in tackles (7) and showed no ill effects of the gruesome injury that banished the NFL’s co-interception leader to the sidelines for six weeks.

“It meant a lot to have our guy out there,” cornerback James Bradberry said after the game. “He was healthy. He brings a lot of energy to the defense; he also communicates well. Just his experience being out there, and of course, all the playmaking ability. He makes a lot of plays for us, that’s why I was glad to have him back out there.”

In Maddox’s absence, the Eagles have done their best to adjust – Josiah Scott has largely been serviceable – but their nickel cornerback spot had become a glaring deficiency requiring immediate attention with the playoffs looming.

But Gardner-Johnson, exclusively a safety through the team’s first 12 games, wouldn’t have even been able to wear another hat had it not been for the emergence of rookie free agent safety Reed Blankenship.

Blankenship, who has accounted for nearly 24 of the team’s defensive snaps thanks mainly to Gardner-Johnson’s five-game absence, has matured into a dependable back-end piece for defensive coordinator Jonathan Gannon.

In addition to serving as the defense’s resident third-level enforcer, Blankenship has managed to parlay his football intelligence and determination into a prominent role for a playoff defense.

Gardner-Johnson’s return to the active roster raised fair questions about whether Blankenship would return to the sidelines, serving primarily as a linchpin for special teams coordinator Michael Clay’s unit.

That scenario would have reprised the Gardner-Johnson/Marcus Epps safety tandem for continuity but wouldn’t have shored up the middle of the field, which had become increasingly vulnerable for the Eagles, often the path of least resistance for opposing quarterbacks.

Instead, Blankenship’s development has enabled Gannon to make best use of the personnel, giving his unit the flexibility to present varied looks and optionality.

And in the midst of the Eagles preparing to face some of the NFC’s most prolific passing offenses, Blankenship’s progression shouldn’t be understated.

“Reed plays – I’m not gonna say he plays like a veteran – but he plays like a guy that’s been playing for a minute,” Bradberry said. “That’s his work ethic. Also, his ability to pay attention and obtain knowledge from the coaches throughout the week. He’s a very smart guy, and he’s also a physical player. And we need that on defense.”